The Temple of Caesar Augustus at Caesarea Philippi

Herod the Great was given the area of Paneion (later to be known as Caesarea Philippi) by Caesar Augustus in 20 BC. In honor of Augustus' visit to the area, Herod the Great built three temples to Augustus, called Augusteums. They were located in Caesarea by the Sea, Samaria-Sebaste, and near Paneon.

Herod the Great was practicing a contemporary Arab proverb: 'Make a friend before you need one.' Herod, with his ruthless rule, needed all the friends he could get, especially those in high places. Having the emperor's support encouraged Herod's brutal rule (Josephus, Antiq. 15: 343-348; LCL 8: 165-169). 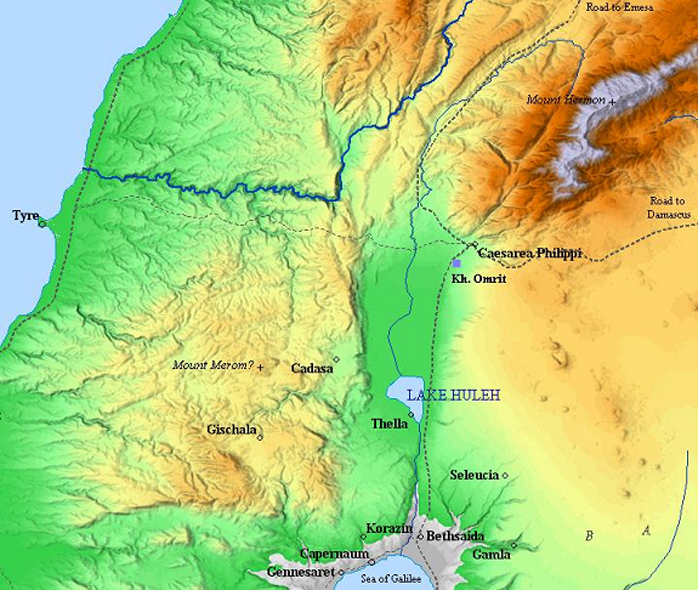 Map of the region of Caesarea Philippi. (Click to enlarge) Gordon Franz

Josephus, the First Century AD Jewish historian, mentions the location and construction of the Augusteum near Paneion in two passages. The first: 'And when he [Herod the Great] returned home after escorting Caesar [Augustus] to the sea, he erected to him a very beautiful temple of white stone in the territory of Zenodorus, near the place called Paneion. In the mountains here there is a beautiful cave, and below it the earth slopes steeply to a precipitous and inaccessible depth, which is filled with still water, while above it is a very high mountain. Below the cave rise the sources of the river Jordan. It was this most celebrated place that Herod further adorned with the temple which he consecrated to Caesar' (Antiq. 15: 363-364; LCL 8: 175-177).

The second: 'When, later on, through Caesar's bounty he received additional territory, Herod there too dedicated to him a temple of white marble near the sources of the Jordan, at a place called Paneion. At this spot a mountain rears its summit to an immense height aloft; at the base of the cliff is an opening into an overgrown cavern; within this, plunging down to an immeasurable depth, is a yawning chasm, enclosing a volume of still water, the bottom of which no sounding-line has been found long enough to reach. Outside and from beneath the cavern well up the springs from which, as some think, the Jordan takes its rise; but we will tell the true story of this in the sequel' (Wars 1: 404-406; LCL 2: 191).

After Herod the Great died in 4 BC, his son Herod Philip was given the northern tetrachy, or the region of Gaulanitis, Batanea, Trachonitis, and Auranitis, to rule. The first of his two capitals was Caesarea Philippi, founded in 3 BC. The second capital was Bethsaida Julias on the shore of the Sea of Galilee.

In the fifth year of his reign (AD 1-2), Herod Philip began to mint coins for his realm. On one coin, he had the head of Caesar Augustus on the obverse and his own portrait on the reverse with the inscription 'of Philip the Tetrarch' (Henden 2010: 258, coin 1219). Another coin had the portrait of Herod Philip on the obverse side and the Augusteum of Paneion on the reverse. The temple is depicted as a tetrastyle (four colums) on a high platform with stairs leading up to the temple (Hendin 2010: 258, coin 1220; Reifenberg 1951: 176, coin 2; Kindler 1971: 162; Pl. 32 A). For the rest of his reign, until AD 34, his coins depicted the Augusteum of Paneion on the reverse with the portrait of either Augustus or Tiberius on the obverse side (Hendin 2010: 258-261). A. Kindler has observed: 'Philip, ruling over a predominately non-Jewish region, was at liberty to strike coins with his own effigy and that of the ruling emperor. He could also depict what is believed to be the temple of Augustus built by Herod, his father, at Panias (Caesarea Philippi)' (1971: 162).

Where was this Augusteum located? Scholars have suggested and debated three different locations for the temple!

The Temple of Pan Complex

In front of the Cave of Pan is an architectural structure that measures 20 by 12 meters is size. It was excavated by Zvi Ma'oz in the 1980's under the auspices of the Israel Antiquities Authority. There are several problems identifying this structure with the Augusteum. First, there is no evidence for the four pillars in front of the temple that are depicted on the coins of Caesarea Philippi. Second, there is no archaeological evidence for a back wall to the structure. Ehud Netzer suggests that the two parallel walls were part of a gatehouse leading to the cave (2006: 222).1 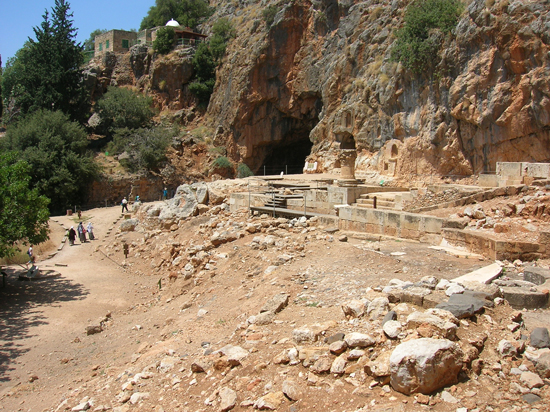 About 100 meters to the west of the Cave of Pan in Banias, Ehud Netzer excavated a pair of walls covered with opus reticulatum on a natural terrace. He suggested that this poorly preserved structure might be the Augusteum because of its prominent location near the Cave and that it could be seen from a distance. It also had a large hall with opus reticulatum dating to the time of Herod. The Augusteum is the only structure built by Herod the Great in Banias that is recorded by Josephus (2006: 221). But if it is the temple, it has more than four columns in front of the temple as depicted on the coins of Banias minted by Herod Philip.2

During the summer of 1998 a wildfire burned a large track of land on the northern slopes of the Golan Heights. This exposed the ruins of Omrit located 4 kilometers south-west of Banias. The site, however, had been surveyed in 1974 by G. Foerster and E. Netzer and limited soundings were made (Nezter 2003: 25). In 1999, John Overman and his team from Macalester College began to excavate the site.

A Roman road passed just north of the temple complex. One could turn off from the road and cross a bridge and travel a colonnaded north-south road to the temple. The excavators discerned two phases of the building and occupation of this temple. The first phase, designation Temple 1, is a prostyle-tetrastyle temple measuring 25.22 meters by 13.16 meters with stairs leading up to four columns in front of the temple. The total height was about 22 meters. This temple is dated to the end of the 1st century BC, the reign of Herod the Great and is observed on the coins minted by Herod Philip.

The second phase, designated Temple 2, was probably enlarged by Emperor Trajan at the end of the 1st century AD, or beginning of the 2nd century AD. It was enlarged to a peripteral plan with 26 columns surrounding the temple. This temple went out of use in AD 363 when an earthquake struck the Jordan Rift Valley. 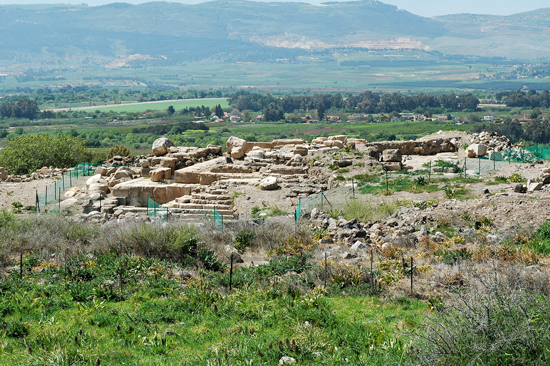 The Lord Jesus and His disciples walked the Roman road on the east side of the Hulah Valley that went from Bethsaida, on the shores of the Sea of Galilee, to Caesarea Philippi. More than likely, as they walked past the Temple of Augustus at Omrit, Jesus asked His disciples, 'Who do men say that I, the Son of Man, am?' (Matt. 16: 16). It was in the shadows of this temple, dedicated to a mere mortal man who was deified upon death that Peter responded: 'Thou art the Christ, the Son of the Living God!' Caesar Augustus was also called the 'son of god' (i.e. the deified Julius Caesar), yet both were dead. The Lord Jesus is alive forever more and He is Lord, not Caesar!

2003 A Third Candidate: Another Building at Banias. Biblical Archaeology Review 29/5: 25.

2004 Caesarea Philippi. Banias, The Lost City of Pan. London and New York: I. B. Tauris.