The 11th season of excavations at Khirbet el-Maqatir is now in the books. The first week was pretty amazing so that would make the second week almost spectacular!

We opened the subterranean structure in Dr. Merrill's square by taking off the covering stone. It was filled with dirt and took a full week to clean out. Over 6 feet deep, it was also 6 feet wide at it greatest. Lots of late Hellenistic and early Roman pottery (1st century BC-1st century AD) and a few coins were recovered

Yet, before the week was out Dr. Merrill had another round hole cut into bedrock also with a covering stone at the other end of his square! But we have a one subterranean structure per square at a time rule (not really!), so he will just have to wait till next year to open that one up. Still, he did clear the opening and found some really great late Hellenistic early Roman pottery (right).

Jim Luther's square found its own subterranean structure with the widest mouth of any we discovered, and you could actually step down into it. I think it was full of Hellenistic/Roman dirt and rocks because that's what the pottery and coins were! They finished cleaning out the whole 8-foot deep and wide structure on the morning of our very last day.

For the record, because none of these underground installations were plastered, they would not have been designed to hold, in bulk, either liquids (water) or solids (grain). Instead, they probably held jars of either. The best term to describe these architectural features would be silo, from siros (Greek: pit for holding grain).

This week, Brian Peterson's square did not have to do any underground digging, but continued to clear the floor of the 1st Century House. Numerous pieces of ritual stone vessels, coins and iron implements were excavated. They also had one of the most spectacular finds of the dig, ever(!) but we need to go through proper channels with the Israel Antiquities Authority before we discuss it.

Scott Stripling's team dug out an unusually large 1st century subterranean ritual bath. It is the second one we have found at the site. It had been opened at some point in the modern world, but was still full of dirt, debris, pottery and a few coins. 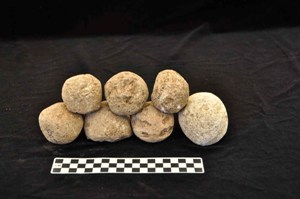 Don McNeeley and my team continued working on the Iron Age house built into the northern wall of the Canaanite city. We never did hit a clear floor level among our 4 walls, but on the last day we found 5 flat stones together in one room that clearly indicated something... just don't know what that is yet! We also won the prize for the most slingstones: nine!

Abigail Leavitt's team finished their 8-foot deep probe along an interior wall of the city and moved to another square to open a third ritual bath. But that's not what it was. Instead it was a series of subterranean rooms, a number with their own openings cut through the bedrock in their ceiling. It was the kind of thing Indiana Jones would have been proud to excavate! (see below).

Last but not least was Dig Director Dr. Bryant Wood's square. Last week he had laid out a new square for his team, waiting for them to finish clearing a small section of bedrock to finish his first square. They never got to his new square because they found their own subterranean structure with its own cover stone.

It had been sealed shut by 70 AD, so everything in it was older than that. In the 3 days they pulled dirt out of this hole-in-the-ground they found about 130 coins! In fact, the local coin specialist (I always struggle with spelling and pronouncing numismatist!) who is working with us said this was the largest collection of individual coins he had ever heard about, coming from a single locus! Dr. Wood spend this whole week doing little more in the field than recording data on all 130 of them.

So, on the whole, I think our dig team spent more time this week working underground than they did above ground. As we concluded things on Friday night, Dr. Wood noted that he called the 2012 season the greatest ever, but this year's finds have exceeded that.

The 2013 excavation at Khirbet el-Maqatir has been an unqualified success and we still haven't finalized all the details on some things yet! There will still be more to tell!

See a slideshow of pictures from the 2013 Dig season at Khirbet el-Maqatir on the ABR FaceBook page (you don't need a FB account to see the pictures).