Home » Research » Search by Chronological Categories » Conquest of Canaan » Testing the Factuality of the Conquest of Ai Narrative in the Book of Joshua: Part Three

Update from Khirbet el-Maqatir Week One

Dr. Bryant Wood describes some of the work from the first week at Khirbet el-Maqatir.

On May 29, 2009, a hearty band of 21 ABR staff members and volunteers completed the first week of a two-week excavation season at Khirbet el-Maqatir, 10 miles north of Jerusalem. They were at times joined by local volunteers from Jerusalem, the Ofra Field School and the Yad Hashmona Guest House. ABR is resuming its work at the site after a hiatus of nine years. The three-acre Amorite fortress excavated by ABR teams from 1995 to 2000 meets the Biblical requirements of Joshua 7¬8 and thus is the most likely candidate for Joshua's Ai.

Efforts this season are focused on the west, south and east walls, and several structures inside the fortress. On the east, Eugene Merrill (Dallas Theological Seminary) discovered a possible bedrock pavement which may be a section of a ring road which circled the site inside the fortress wall. On the west, Pastor James Luther (Florida) uncovered a 5 meter long section of a one meter wide wall that is part of a substantial structure inside the fortress. Dig director Bryant Wood exposed several walls that were part of a building complex just inside the main gate on the north side of the fortress. One of the guest volunteers working in Dr. Wood's square found a large section of a pithos rim and neck which can be accurately dated to the 15th century BC, the time of the Conquest. 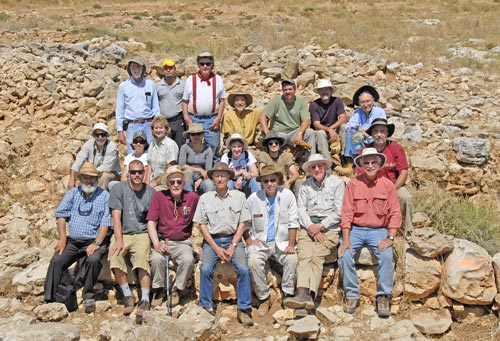 2009 ABR dig team in the gate of the fortress at Khirbet el-Maqatir. 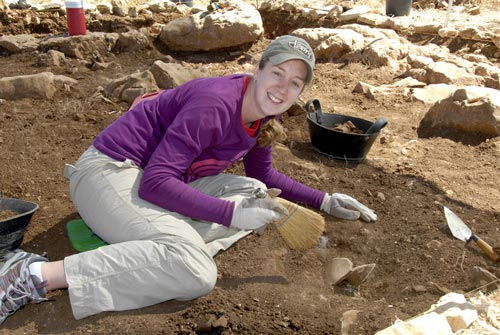 Volunteer Krista Davis (Dallas Theological Seminary) with her find of the neck of a 15th century B.C. pithos.

Pavement discovered on the east side of Khirbet el-Maqatir, possibly part of a 'ring road' around the inside of the fortress. 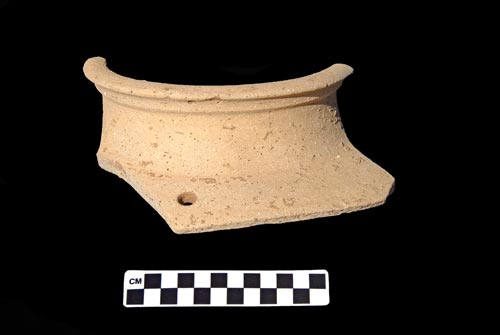 Closeup of the 15th century B.C. pithos rim and neck discovered at the ABR excavation at Khirbet el-Maqatir May 29, 2009.