Digging Up Joshua's Ai: Week Two of the 2014 Season

The 12th season of excavations at Khirbet el-Maqatir is now complete.

There's an axiom in archaeology that the best finds will occur on the final day of the dig. We've frequently found that to be true at Khirbet el-Maqatir... and this season was no exception! In recent years, locals have been using metal detectors at night in our squares. When they get a beep, they'll tear things up to find whatever is causing it - generally a coin.

The New Testament Community that we excavated this season.

So, out of self-preservation, excavations have developed appropriate archaeological metal detector techniques, themselves. Our Khirbet el- Maqatir team has its own specialist, Ellen, as well as a leading Israeli numismatist who works with us. 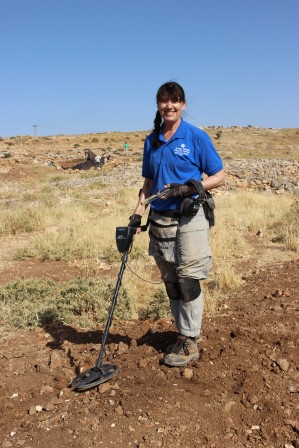 Both were in the field on our last day and even before we started digging, Ellen found two coins from the previous day's digging. That was a great way to get things started!

My square's away from the others - along the north wall of the Bronze Age city of Ai which Joshua captured and destroyed. Archaeological evidence there indicates Israelites also lived here during the time of Judges.

Since coins weren't used that early in history, we don't have any in our square. But before we started Friday, Ellen ran her detector over our dig area and found a complete bronze arrowhead and part of a very unusual bronze and stone tool. It even excited our Israeli numismatist!

The Master's Seminary and Dallas Theological Seminary joined our dig team on the last day of the dig.

We had additional help on Friday with 30 students from The Master's Seminary and Dallas Theological Seminary. They were a big help as we tried to finish clearing to bedrock as many squares of the New Testament community as possible. Bedrock normally means the end of a square - but not at KeM these days!

As the team cleared the inside of Suzanne Lattimer's typical cistern carved into bedrock down into a subterranean room, it became obvious there was another hole from the surface though bedrock. By the time they finished digging their hole, it turned into an 8-step arched staircase down to the cistern's floor (picture left), including a niche carved out to hold an ancient lamp. Since cisterns don't have stairways, this one was obviously renovated for some other purpose.

This week, Dr. Gene Merrill's team began excavating a large fortified tower at the edge of the New Testament community. It, too, was an unusual feature for NT times in the Holy Land.

Dr. Bryant Wood's square went the deepest without reaching bedrock, over 2 meters down. His walls lined up with the city Joshua destroyed, but his pottery was from the time of the Judges (Iron Age 1). He found what I'm looking for!

Dr. Wood's team dug deeper than everyone else and still didn't find bedrock - and he was the next square over from everyone else! He found ancient walls with lots of Israelite pottery from the period of the Judges.

In addition, it now appears we have features from an above-ground olive oil press, to go with the cave oil press excavated last winter. Also, last week's scarab was analyzed and, like last year's scarab, was identified as a unique and rare type.

For the week, there were 5 newly discovered subterranean structures cut into the bedrock of our NT community. That included one in Abigail Leavitt's square with 2 flights of stairs cut into bedrock at a right angle. One flight consisted of 5 steps (pictured left) and another consists of 2 steps. And we still haven't reached the bottom! 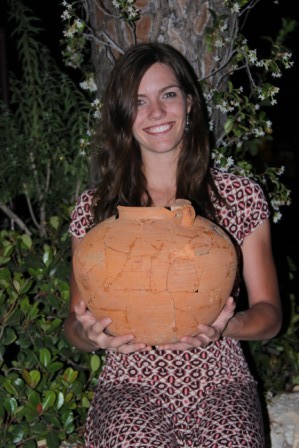 To top the week off, on Friday, Madison Vaught from Lee University found the bronze head (falcon or ram) of a very small figurine while sifting dirt from the excavation.

For the season, we found a record 311 coins. We also raised our ongoing total of NT ritual stoneware fragments to an impressive 80.

So what did we learn at Khirbet el-Maqatir from our 2014 excavation season? First, there was no great new discovery of structures from the Bronze Age city that Joshua defeated and destroyed. In my area, we did uncover a few more stones of the outer face of the northern city wall. Wall lines found at the bottom of Dr. Wood's square are in line to have been built with that Bronze Age city, but the date of their construction is yet unknown.

Of course, there was lots of Late Bronze Age pottery - including numerous pieces which had also been burned in a fire. We call that 'refired' pottery - fired the first time in a kiln and later fired again in the destruction of the city.

Also there was our second scarab. It again demonstrates activity at Bronze Age Ai before Joshua destroyed the city.

Second, while the Bible doesn't discuss an Israelite settlement at Ai during the period of the Judges, the archaeological evidence suggests a community was located there. With the Biblical date for the destruction of Ai at about 1400 BC, there is no evidence of Israelites there for the next 200 years. But around 1200 BC, and lasting for at least the next 100 years, we do have typical Israelite pottery at the site and a few structures (including the stone-built silos in my square).

Finally, the real winner this year was the New Testament-era community at KeM. Beyond the coins (which are being cleaned and analyzed) and stoneware, the architecture gave us plenty of new information.

While supervising his Lee University students in 3 different squares, Dr. Brian Peterson also did restoration work on the First Century House he initially excavated in 2011.

Most of the structures were constructed on a large bedrock outcrop bedrock with no evidence of earlier architecture remaining. There we found additional southern and eastern rooms of our original First Century House (discovered in 2011).

Looking west, the First Century House is on top left. Rooms to the south and east were being exposed at the bottom and on right in photo.

But the biggest surprise was the large number of subterranean structures cut into the bedrock floors of these rooms. The two with staircases were significant in size and unique for such a community.

Evidence for a defensive wall around this community was clarified this season. It may well represent a truly unique community north or Jerusalem during the New Testament period. Dig Director, Dr. Scott Stripling suggests KeM may be the village called Ephraim in the region near the wilderness, outside of Judea (Jn 11:54). KeM is located right on the tribal borders of Benjamin and Ephraim.

The 2014 season was an exciting time and we all knew God watched over and directed us. Thank you for your prayers. Each of us felt His special care in so many ways.

The summer 2014 dig season is over, but you could join us in May-June 2015, or even this coming December. Just check our website www.Maqatir.com for details.

Listen to this two part interview with Dr. Scott Stripling on the 'Book and the Spade' about the 2014 excavation season.