In the Spring 2004 issue of Bible and Spade, I reported on the important discovery of a royal precinct at Rameses, the setting of events recorded in the early chapters of Exodus. The article summarizes the results of excavations undertaken from 1993 to 2000. In the present article I would like to bring readers up to date with the results of further work at the site in the fall of 2004 and spring of 2005, based on a preliminary report published by the excavators (Bietak and Foster-Müller 2005).1

At the time of the Exodus in 1446 BC, the name of the city was probably Perunefer (Bietak 2005), meaning 'happy journey.' The name was later changed to Rameses when the city was rebuilt by the famous Rameses II in the 13th century BC.2 The palatial district in Moses' day occupied an area of some 13.6 acres (5.5 ha) on the east bank of the Pelusiac Branch of the Nile, now dried up, at the modern village of 'Ezbet Helmi. Both geomagnetic surveys3 and excavation have been employed to elucidate the remains. The complex was comprised of three palaces (F, G, and J) and associated outbuildings within a perimeter wall. Palaces F and G are parallel to each other, on either side of an artifi cial lake or large central square. The buildings were constructed of unfired clay bricks, with the exception of doorways and columns which were made of limestone, although now robbed out. The exterior walls of Palace G and the perimeter wall were coated with an unpainted lime plaster. 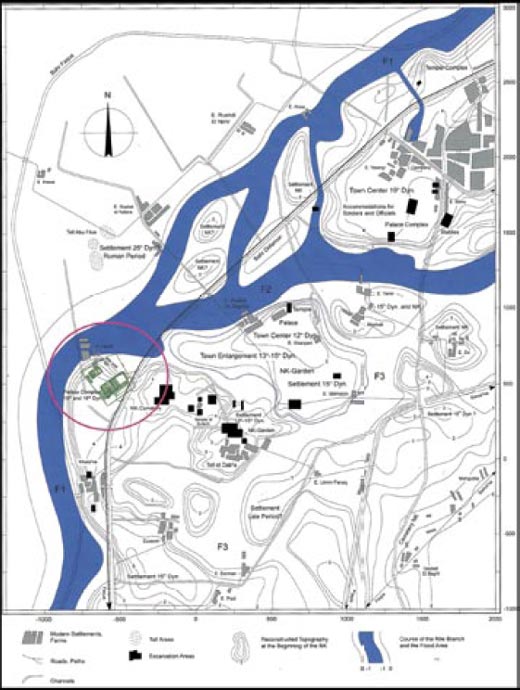 Map of excavation areas at Rameses. A number of ancient cities were located in this region throughout Egyptian history, requiring excavations over a large area. The locale is generally referred to as Tell el-Dab'a, after the name of the village where archeological investigations began. In reality, however, excavations have been carried out at a number of small agricultural villages in the vicinity. The royal precinct discussed in this article is at the village of 'Ezbet Helmi, indicated by the red circle. When Jacob and his family first came to the town, called Rowaty ('the door of the two roads') at that time, they settled in the area of Tell el-Dab'a (Wood 1997). The royal city of Rameses II in the 13th century BC is located in the area labeled 'Town Center 19th Dyn.' to the north.
(From Bietak and Foster-Müller 2005: 66; reprinted by permission of the Österreichische Akademie der Wissenschaften, Vienna, Austria.) 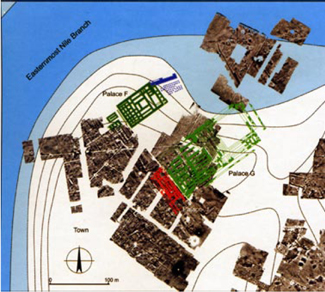 Geomagnetic survey and excavated areas at 'Ezbet Helmi. Palaces F and G are shown in green and Palace J in red.
The gray areas are where geomagnetic surveys have been done, revealing many subterranean features.
(From Bietak 2005: 14; reprinted by permission of the Österreichische Akademie der Wissenschaften, Vienna, Austria.)

The royal precinct was established around the time Moses was born (1526 BC) by one of the early Pharaohs of the 18th Dynasty, probably Tuthmosis I (1524- 1518 BC), not long after the expulsion of the Hyksos in ca. 1555 BC.4 Moses spent the first 40 years of his life in the Egyptian courts (1526-1486 BC) and no doubt would have lived at various royal estates such as the eastern delta residence at Perunefer and the royal palace in the capital at Memphis.5 Following Tuthmosis I, the Pharaohs who ruled during Moses' time as an Egyptian royal were Tuthmosis II (1518-1504 BC), Hatshepsut (1503/1498-1483 BC) and Tuthmosis III (1504-1450 BC).6 Perunefer was a busy place when Moses was there as it was both a commercial and a military center. Trading ships from the Mediterranean could navigate the Nile as far as Perunefer and so it was a bustling seaport. In addition, the city was the start of the overland route to Canaan, the famous 'Horus Road,' the 'Way of the Philistines' in the Bible (Ex 13:17), used for commercial traffic and military expeditions. 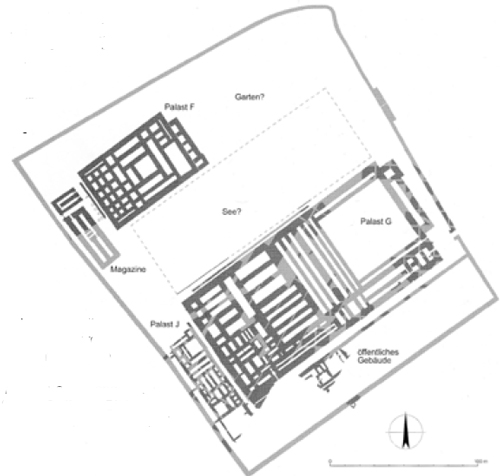 Plan of the royal precinct from the time of Moses. Within the enclosure wall were three palaces, F, G and J. The largest, G, was undoubtedly the official dwelling of Pharaoh when he was in residence at Perunefer, later renamed Rameses. We can conjecture that Moses spent much time here as a boy and during his adult years until he fled into exile at age 40. (From Bietak and Foster-Müller 2005: 69; reprinted by permission of the Österreichische Akademie der Wissenschaften, Vienna, Austria.).

After returning from 40 years in exile (1486-1446 BC; Ex 2:11-4:28), Moses, along with Aaron, spoke to Pharaoh in his palace on at least 11 occasions (Ex 5:1; 7:10; 8:1, 8-11; 9:1-5, 27; 10:3-6, 8, 16-17; 10:24-11:8; 12:30-32). In addition, the Israelite foremen who appealed to Pharaoh to provide straw for bricks (Ex 5:15-21) no doubt did so in the royal palace. Entry to the complex was by means of an entrance pylon on the northeast side. The northwest side of the complex flanked the Nile River. Northeast of the royal compound was a military area, and to the southwest workshops and a residential area as revealed by the geomagnetic survey. Northeast of Palace F the survey detected enclosures and possibly a pier at the river shore. Unfortunately, this area is inaccessible for excavation due to the presence of the village of 'Ezbet Helmi.

The major Palace G, most likely the residence of Pharaoh himself, was constructed on a podium with an entrance ramp on the northeast side. Only the walls of the podium's substructure are preserved, but they provide clues to palace plan. The exterior walls, designed to support a massive structure, were 14-15 ft (4.25-4.5 m) thick. The substructure was filled with earth except on the southeast where there were magazines and stairways leading to the upper story. At the base of the ramp, at ground level, was a bathing room with stone sinks, suggesting it was necessary to wash, and perhaps put on clean garments (see Gn 41:14), before ascending the ramp and entering the palace. At the southwest end of the southeast side of the foundation was a side entrance that led to a stairway to the private section of the palace. Here, just inside the door, was another bathroom, probably for the palace staff. According to the excavators, 'It is apparent that each entrance to the palace passes a bathroom. A full bath must have been obligatory prior to entering the building' (Bietak and Forstner-Müller 2005: 73). 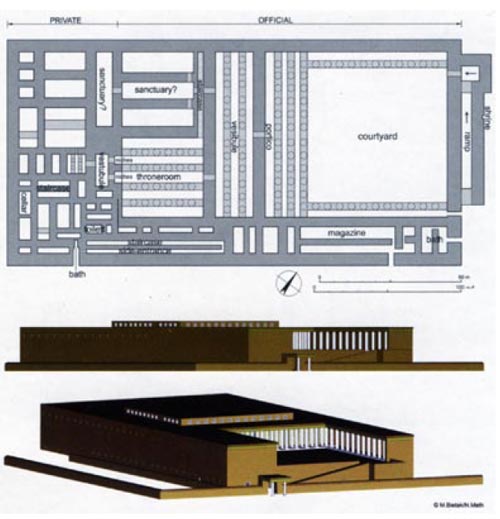 Plan and reconstruction of Palace G. The throne room is probably where Moses and Aaron met with Pharaoh
and said, 'This is what the Lord, the God of Israel, says: 'Let my people go'' (Ex 5:1).
(From Bietak 2005: 15; reprinted by permission of the Österreichische Akademie der Wissenschaften, Vienna, Austria.) 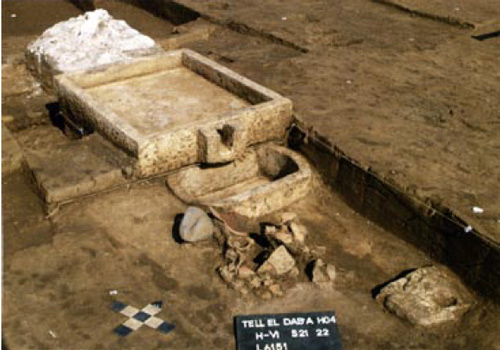 Fifteenth century BC plumbing fit for the king's servants! This limestone tub and drainage basin
were in the ground-floor bathroom at the south entrance to Palace G which led to Pharaoh's private quarters above.
The tub was evidently used for bathing by Pharaoh's servants prior to entering the palace.
(From Bietak and Foster-Müller 2005: 74; reprinted by permission of the Österreichische Akademie der Wissenschaften, Vienna, Austria.).

Small Palace J was oriented at a right angle to Palace G and separated from it by a narrow street. The plan was similar to that of Palace G, but much simpler. A square courtyard, with a columned porch at its rear and an adjoining colonnade, led to a vestibule with the foundations of a row of columns, and, behind that, the throne room with two rows of columns. At both sides the plan shows corridors, one probably a stairway, the other leading to the private part of the building. This consisted of a reception room, a bedroom and a bathroom. At the southeastern end was an open-air porch with a portico and terrace in front. Palace F differed from the other two palaces in that it had no private quarters. Evidently, it was used for ceremonial purposes only.

A great pile of fragments of Minoan7 frescoes were found at the base of the Palace F ramp. They were painted on highly polished lime plaster and date to the early 18th Dynasty. Motifs such as largesized griffins and lions no doubt flanked the throne on the rear wall of the throne room in Palace F in a similar fashion as at Knossos in Crete. Floor paintings with a maze pattern probably also came from the throne room, as well as bullleaping scenes, hunting scenes and scenes of lions and leopards chasing hoofed animals. Reliefs of bulls probably came from the colonnades of the central courtyard.

Palace G also had Minoan frescoes, as well as paintings on mud plaster in the Egyptian style which also showed a Minoan influence. At the entrance through the enclosure wall which led to the base of the ramp of Palace G, fragments of a life-sized representation of a woman in a flounced skirt were found. A female mother-goddess with a flounced skirt is commonly depicted in Minoan art.

The reason why this strategic center in the eastern delta was abandoned is a mystery to the excavators. There is nothing recorded in Egyptian history to explain it. The excavators state:

The palace district was probably abandoned after the reign of Amenophis II [=Amenhotep II, 1453-1419 BC]…The reason for the abandonment of this district, and, presumably, the entire city adjoining the district on the south is an unsolved puzzle at this time. Its solution would be of the greatest importance to historians. The suggestion that the peaceful foreign policy of the late reign of Amenophis II and Tuthmose IV made this militarily important settlement unnecessary is not convincing. A plague, such as the one documented for Avaris in the late Middle Kingdom, and associated with Avaris in later tradition, appears to be the most likely solution of this problem, although it cannot be proven at this time (Bietak and Forstner-Müller 2005: 93, 95).

By correlating in time and space the events recorded in the Book of Exodus with the findings at 'Ezbet Helmi, the reason for its abandonment becomes clear. The series of plagues that took place at Perunefer made it an unsuitable, or undesirable, place to live. In later generations the bricks from the palaces were carried off for other construction projects leaving the remains to decay over the ages. Fortunately, enough remained of the substructures to allow approximate reconstructions of the palaces where Moses roamed, lived and confronted Pharaoh.

1. I wish to thank ABR Board member Walter Pasedag for translating the original German article into English.

2. Since the earlier name went out of use, it was updated to Rameses in the Biblical text by later editors.

3. Using a magnetometer, differences in the magnetic field below the surface are detected which reveal man-made features such as walls.

4. The name Hyksos is an Egyptian term meaning 'foreign rulers' (Higgenbotham 2007). Neutron activation analysis has demonstrated that they most likely originated in southern Canaan (McGovern 2000), i.e., they were Canaanites who immigrated to Egypt. While ruling Egypt ca. 1663-1555 BC, their capital was at Tell-el Dab'a, called Avaris, 'the (royal) foundation of the district,' at that time.

6. On the identification of the princess who adopted Moses, see Hansen 2003, and on the Pharaoh of the Exodus, see Shea 2003.

7. The Minoans were a seafaring people who inhabited the island of Crete. They were heavily involved in trade in the Aegean and Near East, including Egypt and Canaan, during the Bronze Age.

Shea, William H. 2003 Amenhotep II as Pharaoh of the Exodus.