The voice of the Tanach, the Hebrew OT, is simple and clear-- the Israelites crossed the yam suph. Yam is "sea," suph1 is "reeds"; together, they mean "Sea of Reeds." In the OT, the yam suph was a definite location, and a large one. There God deposited the locusts that devoured Egypt (Ex 10:13 19). After crossing the miraculously parted yam suph, the Israelites traveled some distance over an unspecified period lasting several days, then encountered the yam suph again (Nm 33: 10-11 ). The yam suph had a shoreline in the land of Edom, where were situated the cities of Ezion-Geber and Eloth. And the yam suph was to be a border of lsrael (Ex 23:21).

The yam suph is mentioned throughout the Hebrew Scriptures-- a dozen times in the Law,2 and as many in the Prophets and Holy Writings. The majority of instances are found in passages that chronicle God's miraculous deliverance of the Israelites in their exodus from Egypt.

Can Yam Suph be Expressed in Greek?

So the Greeks could certainly write about reeds, and the vocabulary doesn't stop at kálamos. Other Greek "reed" words include the puthmçn (Gn 41 :5, 22, LXX) on which grew the grain in Pharaoh's prophetic dream, and hélos, a swamp or marsh featuring good vegetation. There could be a "flowering stretch" of hélos (Aristophanes 1907 and 1994: line 352), and one of Homer's similes describes thousands of cows grazing in a hélos (Homer 1931: bk. 15, line 631).

The Persians were often running into this hélos or that. Xerxes was campaigning in Macedonia near a hélos when lions attacked his camels (Herodotus 1890 and 1920: bk. 7, chap. 124). In his assault on Babylon, Cyrus the Great diverted the River Euphrates to feed a swampy area-a hélos (Herodotus 1890 and 1920: bk. 1, chap. 191). Cyrus's son Cambyses, in his advance on Egypt, ran into a great hélos where he lost many of his men; his next stop was Pelusium (Diodorus 1989: bk. 16, ch. 46, secs. 4-6), so he wasn't far from the reedy area, the yam suph, where the Egyptians had met their catastrophe almost a millennium earlier.

Hélos can refer to a reedy area, as it does in the LXX Exodus 2:3, 5 and Isaiah 19:6. Hélos is the perfect Greek word to translate the Hebrew suph if suph is recognized as meaning "reeds" or "area of reeds." Suph is indeed what hélos is translating in Exodus 2:3, 5. But the LXX translators used a very different term for the suph of yam suph.

The LXX writers, in translating yam suph throughout the Pentateuch, Joshua, Nehemiah and the Psalms, used a term that has no apparent literal connection to suph. Erythrá thálassa3 is their rendering-"Red Sea," not "Reed Sea." After yam suph, this was a second and different word concerning the Israelites' crossing and God's great work. Was it a false word, or was the word true? 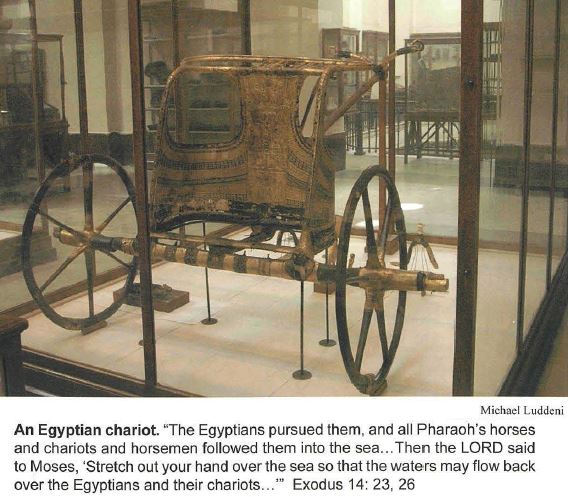 Click the following link to read the entire article in PDF format:  The-Red-Sea-in-the-NT.pdf