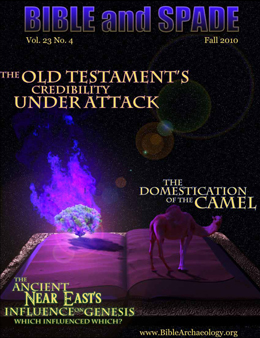 The authority of the Bible is the central focus for the Associates for Biblical Research and we stand unreservedly for the inerrancy of the Scripture. We are witnessing all around us the compromise of those in higher education and in church leadership who name Jesus as Savior and Lord, but who feel at ease questioning the veracity of the word of God. Somehow the approval of men has become more important for some as they seek to stay in good standing among those in the world of biblical scholarship.

The motivation of some in pastoral and spiritual leadership to compromise may have more to do with a desire to focus on the felt-needs of those struggling through the effects of our post-modern culture (and the Fall) and seeing those concerns as more important than the 'academic' debate over the authority of the Bible. The very nature of the debilitating effects of post-modern philosophy makes taking a stand for absolute truth 'uncomfortable' in the face of the powerful but delusional concept of relating to human needs over being correct in doctrine. Stressing that anything is absolutely true and right is simply unpopular in this age of the equanimity of every viewpoint and opinion. This would explain while on the one hand they outwardly claim to believe the Bible to be the word of God but then equivocate when certain difficult questions confront them. These difficult questions are often the ones that the staff of ABR take head on in order to assist pastors in their ministry. We seek to give solid answers to important biblical questions and to encourage pastors to stand firmly for the authority of Scripture.

More than ever there needs to be a true revival among our Christian educators and spiritual leaders so that the transformed life that they teach and preach about can have a substantive foundation in the clear teaching of the Bible's absolute authority. And we need to heed the warnings of Scripture to seek only God's approval in our ministry, and equally, to avoid submitting to the 'wisdom' of the 'scholars' of this age. Truth is at stake…and the eternal well-being of souls. We simply must return to the word of God and proclaim its absolute truthfulness and authority so that its transforming power will be unadulterated by the vacillating whims of men. God's presence, His true voice is in His word, and we must never water it down in order to make it acceptable to men.

· 'On the contrary, we speak as men approved by God to be entrusted with the gospel. We are not trying to please men but God, who tests our hearts.' 1 Thessalonians 2:4

Amen. The Fall 2010 issue of Bible and Spade is packed full of material that supports the reliability of the Biblical text. Here is a sneak preview of this upcoming issue:

1. In his article, Two Ancient Sumerian Tablets Saying NO-O-O-O to Paganism, Dr. Paul Ferguson analyzes two tablets from Sumer, which demonstrate that the idea of monotheism goes back far earlier than Moses.

2. Written by Richard D. Lanser, The Influence of the Ancient Near East on the Book of Genesis, critiques evangelical attempts to use Ancient Near Eastern literature as a primary tool in interpreting the creation account in Genesis.

3. An Army of Straw Men: Responding to Ronald Hendel is written by Henry B. Smith, Jr. This abridged version of the longer online article strongly critiques a recent article in Biblical Archaeological Review.

4. It is often claimed that the camels mentioned in the book of Genesis are erroneous anachronisms added by hypothetical redactors centuries later. ABR Associate Titus M. Kennedy addresses this problem in The Domestication of the Camel in the Ancient Near East.

5. The Great Isaiah Scroll and the Original Bible: An Interview with Dr. Peter Flint by John D. Barry