Home » New Testament Era » The Angelic Proclamation to the Shepherds

Introduction
Few things are more exciting at an archaeological excavation than finding coins, probably because they provide a direct and tangible connection with history. There is often writing on these coins which is an important factor in archaeology, because a readable coin can help to date the stratum in which it was found. On June 1, 2011, my team in Field C at Khirbet el-Maqatir found nine coins; eight of them were from a single locus inside the central apse of the church. Three other coins were found in an Early Roman house on the east end of the site. In December 2011, another eleven coins were recovered. The table below provides the details of these 23 coins. 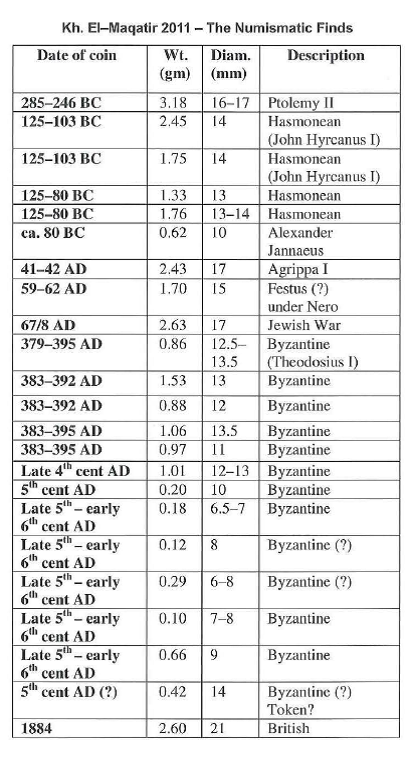 The oldest coin was from the mid-third century BC (Ptolemy11, 285-246 BC), and the most recent was a British coin from the 19th century. This range of dates spanning two millennia, yet appearing in the same stratum, requires some explanation, since the assumed dates for the ecclesiastical complex are from the fourth to the sixth centuries. The initial pottery readings and the coin dates confirm this. Thirteen of the coins date to the Late Roman or Byzantine timeframe. Six of the coins are from the three centuries before Christ. Five of the six were minted by the Hasmonean rulers. Three of the coins were from the first century AD, including a coin of Porcius Festus (Acts 26) and a coin from Year Two of the First Jewish Revolt. The final first century coin and the focus of this article was minted by Herod Agrippa I; it was the first from the New Testament period to be found at Khirbet el-Maqatir after nine seasons of excavation. Previously, coins were limited to the lntertestamental period, the latest being a coin of Herod the Great that was dated to his third year as king, 37 BC. 1

Agrippa coin found in the monastery excavations at Khirbet el-Maqatir.

Agrippa I, grandson of Herod the Great, was the son of Aristobulus IV and Bernice and father of Agrippa II (Acts 25-26); he ruled as king over much of his grandfather's realm from AD 37 to 44. The Agrippa I coin dates to the sixth year of his reign, AD 41/42. Agrippa I was in many ways an enigma. He was a close friend of Emperor Caligula (AD 37-41) and also enjoyed the favor of Claudius, who came to the throne in AD 41. Claudius was emperor when the Maqatir coin was struck. Agrippa I minted coins bearing the images of these Caesars and various pagan likenesses. On the other hand, he went to great lengths to maintain peace with the local Jewish population. He persuaded Caligula to abandon his bizarre intentions to erect a statue of himself in the Jerusalem temple (Josephus, Ant. 18.8.2-9) Agrippa I also ingratiated himself with the Jewish leaders by ignominiously becoming the first ruler to persecute the nascent Christian Church (Acts 12:1-3). This was certainly in keeping with the policies of Emperor Claudius, who according to Acts 18:2 expelled all Jews (traditional and Messianic) from Rome. In The Twelve Caesars, Suetonius poignantly confirms that "There were continual uprisings on account of Chrestus" (Life of Claudius 25:4). Chrestus is a reference to Christ.2

Agrippa's title on the obverse (front) of the coin is BASILEUS, the Greek word for "king." This is in keeping with the Roman custom of lauding the ruler who issued a coin, and not surprisingly, was the exact title attributed to him in Acts 12:1. The reverse of Roman coins was normally for propaganda purposes, but a client king like Agrippa wisely placed three ears of barley on it, a traditional Jewish symbol.

The Mishnah records that during the Feast of Tabernacles in AD 41 he publically read Deuteronomy 17:15 which states,"You may not put a foreigner over you who is not your brother." When Agrippa, who like all of the Herodian rulers was only part Jewish, began to weep, the people responded, "Grieve not, Agrippa; you are our brother! You are our brother!" (Sotah 7:8). This sort of adulation led to Agrippa's gruesome death at Caesarea Maritima in AD 44 at the tender age of thirty-four. After a speech, p erhaps in the still standing amphitheatre, the crowd proclaimed that his words were those of a god (clearly idolatry), and "Because Herod did not give praise to God, an angel of the Lord struck him down, and he was eaten by worms and died" (Acts 12:23). Interestingly, the same event was recorded by the Jewish historian Josephus(Ant.19.8.2), a fascinating and important synchronism between biblical and secular texts. 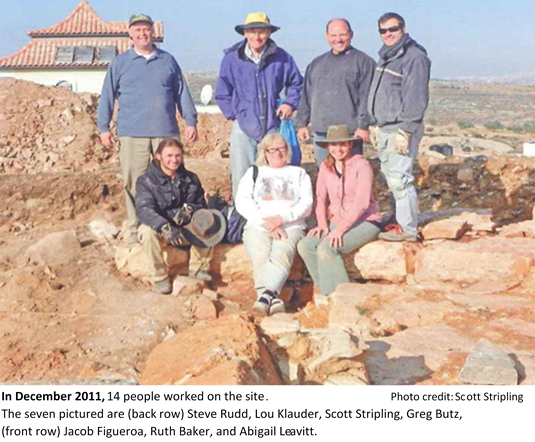 All of this is informative, but it begs the question, what is a first century coin doing in a fourth to sixth century conobium-type monastery?3 There are four possible explanations for this seemingly odd occurrence. First, one of the monks may have been a coin collector. This is pure speculation and highly unlikely. Second, maybe the monastery and church are much older than first thought. Although recent discoveries of early churches at places like Megiddo (ca. 230) have forced a rethinking of the transition from the domus ekklesiaor house church to basilicas or public buildings devoted to Christian worship, this second possibility also seems unlikely, especially with the appearance of a possible side apse indicating a later church (Tsafrir 1993:12). Third, the early coins may have been part of the fill used to level out the area upon the jagged bedrock to create a flat surface for the church and monastery. Most of the early coins came from below floor level (2914 ft [888.23 m]), but some were found above floor level. This could be explained by scavenging or earthquake damage. Third, in Roman and Byzantine times coins may have remained in circulation for hundreds of years. This appears to be the most plausible explanation. Classical numismatist David Yagi cites examples of this prolonged circulation:

It is well-documented both by literary and archaeological
evidence that ancient coins often circulated for centuries. An
excellent example is the countermarking of older, worn coins
in the east by the emperor Vespasian in the early A.D. 70s.
The majority of these denarii were at least a century old at
the time they were countermarked. The issuance of Imperial
cistophori by the emperor Hadrian (117-138) is similarly
convincing. Most (if not all) of the planchets used were older
cistophori issued some 100 to 150 years earlier. We have no
reason to doubt that these "host" coins (the coins that were
overstruck) had been in circulation up until the time they
were withdrawn for re-coining (1999: 19-20).

This article was originally published in Bible and Spade Vol. 25 No. 2