Significantly, the best known examples come from the Middle Kingdom, exactly the period of Joseph's career. While none of the known officials holding these two posts can be identified with Joseph, it is probable that he was the first to do so and set a precedent.

Two deaths are recorded near the end of the Book of Genesis, that of Jacob and of Joseph himself. Both men were embalmed, or mummified. Today, the popular view is that this was a mysterious process about which we know little or nothing. Such is not the case. With the large number of mummies preserved in museums, we would be poor scientists indeed if we could not reconstruct this procedure. What then were the basics of mummification? (see Adams 1984, and on the popular level, Davis 1986)

Two things were essential to the mummification process. First, the body was dried. A great deal was accomplished in this regard by the naturally dry climate of Egypt. I remember seeing a photograph of a Roman soldier who had died in Egypt and who had been buried in the sand without any kind of embalming treatment at all. His hair was well preserved, as were his teeth, and there was a good deal of skin remaining, too. The Egyptians aided this natural drying process, however. They packed the body with a powdery substance called natron (basically sodium carbonate and sodium bi-carbonates). This chemical is found naturally in several locations in Egypt (Lucas 1962:263ff.). 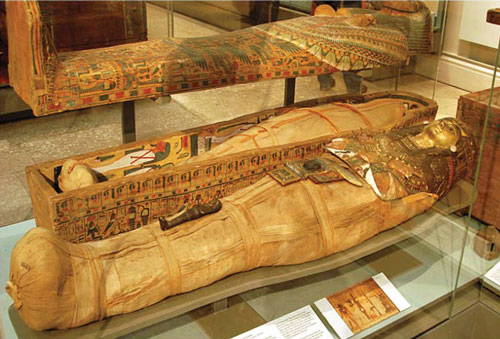 It is important to realize that a liquid solution was not used, but rather that the body was packed in this dry powder for a period of many days. The exact length of time in the natron varied according to which period of Egyptian history the mummy belonged and according to the amount being spent on the process. Presumably, a rich family would spend more on preserving their family members.

A second thing necessary for mummification was the removal of the vital organs of the body. If these are left inside the person, they will speed decay. Thus, the Egyptian embalmers removed all of the abdominal organs except the heart, and also removed the brain.

This last procedure created a problem, however. The Egyptians were concerned about the body retaining its identity, and they did not want to harm the head or face in any way. They resolved this problem by unraveling and removing the brain through the nose with a sharp hook of some kind. Gruesome as this may sound, it worked rather well. After their removal, some of the organs were wrapped and placed inside containers in the tomb with the mummy. It was expected that they would be needed for a happy life in the next world! 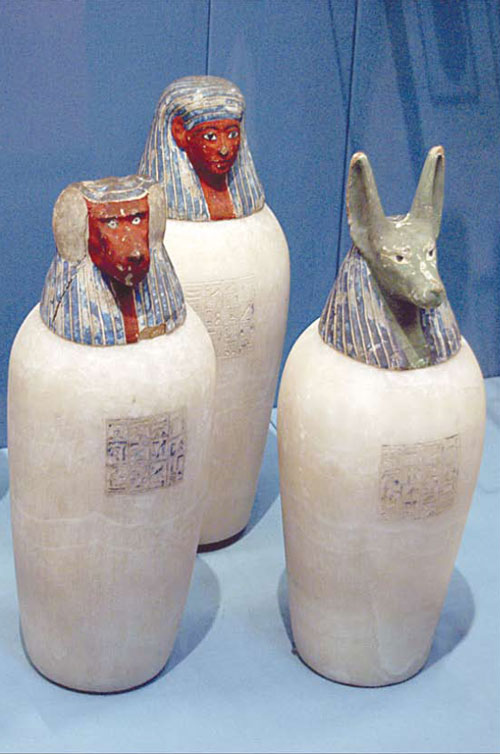 Canopic jars in which the wrapped organs of the dead were placed, British Museum, London. The jars were then deposited in the tomb along with the mummified body.
- Mike Luddeni.There were of course, certain religious ceremonies that went along with the mummification process. Joseph, I am sure, would not have wanted any of these done for him, and, if he had any say in the matter, they were not done. But, after all this was accomplished, the body would be skillfully wrapped in spiced linen and placed in a coffin.

Next, the mummy would be entombed. In Joseph's case, instructions had been left to remove him from Egypt when his family went out of that land. It is, therefore, useless to look for the grave of Joseph in Egypt, since his body left Egypt at the time of the Exodus.

A final observation on Joseph's life and career: According to Genesis 50:26, Joseph was 110 years old at the time of his death. This age is interesting, since in ancient Egypt 110 was considered the perfect age at which to die (Aling 1981:51, note 25).

What happened to the Jewish people after Joseph's death? At first nothing happened. In the early verses of Exodus chapter 1, however, we see that a king rose up who knew nothing of Joseph. This personage was, I believe, a Hyksos Pharaoh.

The Hyksos were a foreign people from Syria-Palestine who ruled the northern portions of Egypt in the so-called Second Intermediate period, ca. 1786-1570 BC.

That this king was a Hyksos is shown by a number of things. The Hebrew of Exodus 1:8 indicates a negative kind of rulership. Also, Exodus 1:9 states that the king had a fear that the Hebrews would outnumber his people. It is not realistic to believe that the Jews would ever become more numerous that the native population of Egypt; but they certainly could outnumber a ruling minority like the Hyksos.

Finally, in Exodus 1:11 we are told that the Hebrews, as slaves, labored at two cities: Pithom and Rameses. Pithom is not located yet with certainty, and is in any case not important for our discussion here.

But Rameses was the great delta capital under the Hyksos first and then later under King Rameses II of the 13th century BC. In Dynasty 18, ca. 1570-1325 BC, little or no major work went on there.* It seems certain, then that the Hebrews worked at Rameses during the Hyksos period.

The bondage of God's people lasted for many years. Joseph's accomplishments were forgotten for the time being, but were remembered and recorded in Jewish records, were to be written of by Moses, and were also to be rehearsed by uncounted generations to come.

As Joseph was not forgotten by the Jewish people, he is not forgotten by us. It is hoped that these brief articles have helped to make him a real person, set against the background of Egyptian history and civilization. 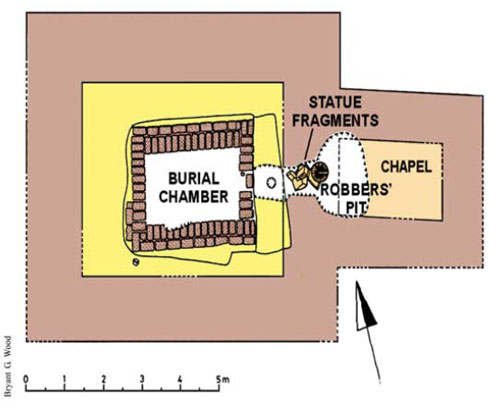 Plan of the tomb of an important Asiatic official at Tell el-Dab'a, ancient Rameses, Egypt. Inside the tomb were remnants of a larger-than-life statue of the owner of the tomb. The tomb had been entered in antiquity and the remains of the occupant removed. The tomb is in the right place and dates to the right time period to be the tomb of Joseph, whose remains were taken out of Egypt by Moses (Ex 13:19).