Home » Research » Book & Video Reviews » Book Review: Origins of the Hebrews: New Evidence of Israelites in Egypt from Joseph to the Exodus

In Quest of the Temple Mount

In a sense, this book is the culmination of Leen Ritmeyer's life and career. Of the April 1984 International Congress of Biblical Archaeology in Jerusalem, when his collaborative work with Benjamin Mazar was presented, Ritmeyer wrote, 'At this defining moment in my life, I realized the unraveling of the mysteries of the Mount had become my personal quest (p. 12)'. 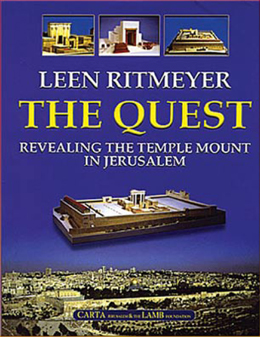 A review of: The Quest: Revealing the Temple Mount in Jerusalem, by Leen Ritmeyer (Jerusalem: Carta). Available in the ABR Bookstore.

It all began back in 1973, when he served as field architect for Benjamin Mazar's excavations south and southwest of the Temple Mount. On this dig, in 1975, Leen met an archaeologist named Kathleen. She would become his wife and what Leen continues to call 'his best find on the dig' (for Kathleen's take, see her sidebar article in Biblical Archaeology Review Jan/Feb 2007: 45). Together they have shared in the research behind this project, and along the way have written a significant number of articles and books, beginning with a 1989 series in Biblical Archaeology Review.

The present volume brings together the various aspects of all their previous work and publications on the Temple Mount, along with their latest research (some still in press), into one volume. Leen is probably the best-known archaeological architect working in Israel. As someone who has followed their work since that first series in Biblical Archaeology Review, and later had the opportunity to work with Leen in Israel, I appreciate the who, why and how behind the book that he offers in the Preface and Introduction. His contributions to the study of the Temple Mount are immense, reflecting his breadth of knowledge and his many insights into the text. In fact, to draw on the old adage, Philip Evan's photographs of the five models of the Tabernacle and Temples, along with Ritmeyer's precise plans and drawings of the Temples and Temple Mount through the ages, are each worth a thousand words.

Ritmeyer and Carta have collaborated to create a unique volume that reads like a high school or college textbook. It was truly directed at the average student of the historical development of Jerusalem's Temple Mount, with definitions and sidebars of text and diagrams in the margins-and it delivers. Yet the sheer breadth of information and the technical nature of so much of the data make this the most extensive study to date of Temple Mount architecture and the definitive work on the subject for scholars.

One aspect that I appreciate about this volume is Ritmeyer's appreciation for and liberal use of the Biblical text. He treats both the Old and New Testaments as credible historical sources. This includes his use of the 'internal biblical chronology' (p. 7). Not feeling the need to defend or explain it, Ritmeyer simply starts from that assumed point and proceeds.

Acknowledging that his hypotheses need to be verified by archaeological excavation (a doubtful possibility, given the political and religious realities in Jerusalem), Ritmeyer believes this volume is the first work on the subject based entirely on our presently-known archaeological evidence (p. 12). Describing his approach to the subject as centripetal in nature, he starts from the present outer frame of the Temple Mount and then works towards the center. 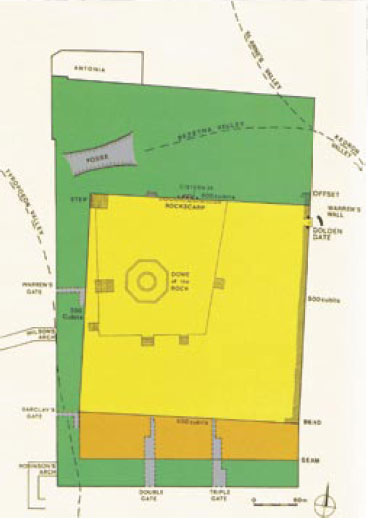 Students of the Temple Mount are familiar with the academic designations of a First Temple in Jerusalem (built by Solomon) that was destroyed and a Second Temple later rebuilt (the story is described in Ezra and Haggai) in the same area. The platform upon which it stood was the Temple Mount, of various dimensions during different periods.

The Temple Mount's full extent is discernable today. Trapezoidal in shape, it contains some 35 acres on top of its walls. Called har ha-bayit ('the Mountain of the House') in Hebrew and haram al-sharif ('the Noble Sanctuary') in Arabic, it is the holiest spot in Jerusalem for both Jews and Moslems.

Ritmeyer's starting point for the historical reconstruction of the Temple Mount is an examination of the external walls of the Herodian Temple Mount compound as known today (chapter 1). This is the architectural evidence that Ritmeyer himself has seen, photographed, measured and drawn, and not surprisingly this is the longest chapter of the book. This hard architectural evidence is the foundation for the rest of the book.

From there, he looks at evidence for a Hasmonean (Second Temple) extension of the Mount to the south (chapter 3). Then he examines the later northern, southern and western extensions of the Temple Mount by Herod (chapters 4 and 5).

Drawing of the Herodian Temple Mount (p. 19). The well-known and widely circulated Ritmeyer color drawing of Herod's Temple Mount, along with associated structures and features, as seen from the southwest. This reconstruction is based directly on his own work at the Temple Mount.

Ritmeyer then turns to the Temple building itself. He reconstructs the First Temple of Solomon (chapters 6 and 7) directly upon the large exposed section of bedrock called the Sakhra ('rock' in Arabic) beneath the Muslim Dome of the Rock shrine. In chapter 8, he examines evidence for the Second Temple building (see Ezra and Haggai) at the same location as the First Temple above the Sakhra (p. 320). Then he presents Nehemiah's restoration of the square Temple Mount ('the palace [birah] which appertained to the house') along with Jerusalem's city wall (p. 322).

While he discusses the exterior walls that created the Herodian Temple Mount in chapter 1, Ritmeyer addresses the literary and archaeological evidence for the top of the Herodian Temple Mount in chapter 9. Next he examines Herod's reconstructed Temple (chapter 10). This is the building Josephus called 'a structure more noteworthy that any under the sun' (Antiquities 15: 412), and Ritmeyer's research (and models) really make it shine.

As a specialist on the history of expeditions to and excavations on and around the Temple Mount, he illuminates all we know about the digs, features, artifacts and architecture of the Mount. Ritmeyer also offers a clear and reasonable reconciliation of this archaeological evidence with Josephus and the Mishnaic tractate Middot. He uses all this evidence to illuminate the Biblical text and vice-versa. Weaving all these data together, he provides a complete picture of the historical development of the Temple, from Solomon, through Ezra to Herod. Even later Byzantine, Moslem and Crusader activities on the Temple Mount are examined to complete the picture.

While some will note that they have seen many of Ritmeyer's illustrations and insights before, this volume brings them all together in one place. But the book is not just a collection of old, albeit interesting, research. The 'Square Temple' came to light in 1984; the significance of the 'bend' in the eastern wall, reconstruction of the streets and shops around the Herodian Temple Mount, the precise location of both the Temple itself and the Ark of the Covenant beneath the Dome of the Rock, and the reconciliation of archaeological evidence with ancient non-Biblical texts are also previous insights Ritmeyer has at least partially published elsewhere. But all of it is brought together here and thoroughly explained, illustrated and tied together.

Here also, for the first time, Ritmeyer offers his reconciliation of the differences between 1 Kings and 2 Chronicles. He suggests that 1 Kings presents the Temple as originally constructed by Solomon (pp. 280-93). Then, he notes the numerous changes made to that structure over the next 200 years (pp. 295-303). Finally, Ritmeyer shows that the Temple of 2 Chronicles was the Temple as it existed at the end of the kingdom of Judah (the Temple of Hezekiah and later, pp. 303-12).

The Quest is an outstanding volume that will be appreciated by both academics and students. Beautifully illustrated, it is interesting and simple enough to be a coffee table book. The photos of Ritmeyer's models, his detailed architectural drawings, and the yellow-box sidebar articles are outstanding presentations of his research.

Yet, I did find a few editorial mistakes (which I passed along for the publisher) and I would also offer a few suggestions about the presentation of the data. As one who has viewed Ritmeyer's five models of the Temple and Tabernacle (see p. 4) in person, I think a double page spread with photographs and captions (in the Preface, Introduction, or as an Appendix) would be helpful to readers and allow them to fully appreciate the numerous photos of Ritmeyer's models in the book. There were also photos of some other models that I suspect were not done by Ritmeyer. I would like to know which is which. 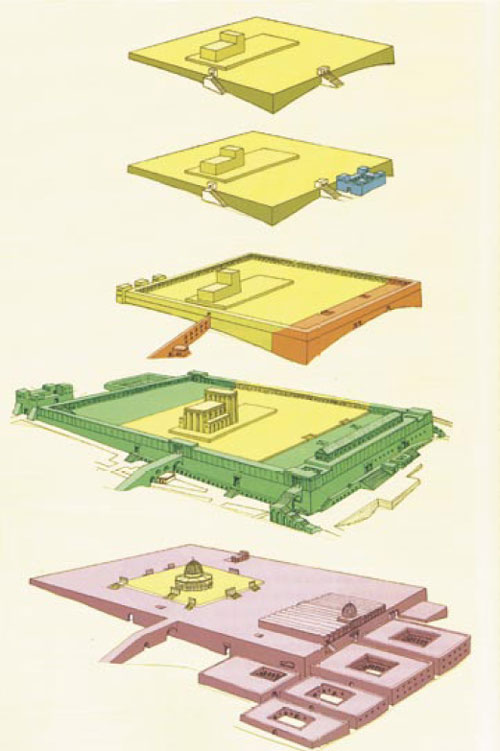 As a reader, I also was interested in knowing the source of many photos, especially to know which were Ritmeyer's. In addition, while familiar with many of his drawings, I found myself often looking at a drawing with which I was not familiar, and I wanted to know if it was his work or not.

This writer has become an enthusiast for what I call 'Biblical Archaeology Review-type' extended captions for photographs and drawings. A number of photos in The Quest had one-line captions that could have been expanded to offer much greater information. Numerous coins, busts of ancient rulers, and other museum pieces could have been described in greater detail to inform on the same level as the rest of the book. I would also appreciate an expanded caption with Ritmeyer's own insights on the Tabernacle as he has depicted it in one of his models (p. 4). A well-known mosaic from Pompeii, presumed to be Alexander the Great, is depicted on page 325. There are a number of interesting facts about this mosaic (that I can never remember) that would also be helpful to readers. In light of the book's wide margins, such additional information for many of the book's photographs and drawings would probably have been easy to incorporate.

Also, I admit I am not a fan of the color drawings of Biblical events that were derived from a 19th century source. Finally, I appreciated the numerous definitions that are probably quite valuable for the book's target audience, but a nice additional touch would have been to add the linguistic etymology of each word.

As the Administrative Director of the Khirbet el-Maqatir excavation during the 1990s, I have spent a considerable amount of time with Ritmeyer. I have introduced him numerous times to audiences. This is what I usually say: 'There is no one alive today, Christian, Moslem or Jew, who has seen, measured, drawn and photographed more of the Temple Mount than Leen Ritmeyer.' With this book, I feel fully supported and vindicated! 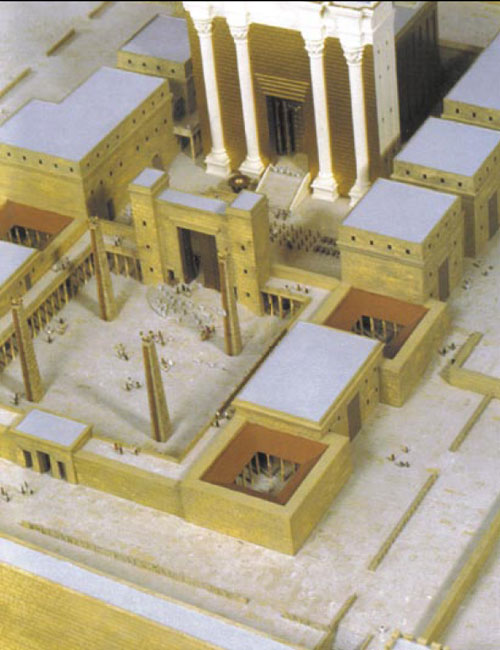