Why Should I Believe Christianity? A Book Review 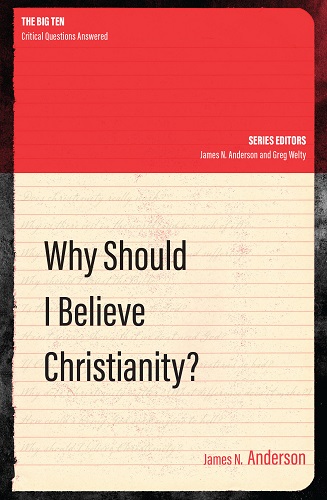 Why Should I Believe Christianity? by James N. Anderson is part of a series, The Big Ten: Critical Questions Answered, published by Christian Focus Publications...

This book is available for purchase in the ABR online bookstore.

Why Should I Believe Christianity? by James N. Anderson is part of a series, The Big Ten: Critical Questions Answered, published by Christian Focus Publications. This volume by Anderson puts forth positive reasons for accepting and believing in the Christian faith. This work is not intended to be exhaustive; rather, it is a small softcover book and is easily readable. This book consists of seven chapters, and could naturally be used in the context of the local church. It could also be given to a sincere skeptic, someone interested in understanding the broad tenets of the Christian worldview and open to hearing why Christians believe what they believe. It is not intended to be an apologetic defense against objections, but instead serves primarily as a positive presentation of the core elements of Christian belief.

Chapter One asks the question, 'Why Believe?' As the chapter unfolds, Anderson quickly surveys relativism/skepticism, knowledge, and truth. It is reasonable to believe something if it is true, and it is more reasonable to believe something if you know it to be true. The brief insights serve as a launching point, as Chapter Two lays out 'The Big Picture.' Anderson explains how each and every worldview is indeed more than the sum of its parts. Christianity needs to be presented and evaluated as a coherent and overarching worldview. Worldviews represent 'our most fundamental beliefs and assumptions about the universe we inhabit' (p. 33). Worldviews are necessary, greatly shape the way we think about the world, and deeply influence the way we evaluate truth-claims. Anderson puts forth four tests that can be used to evaluate worldviews: the Consistency Test, the Coherence Test, the Explanation Test, and the Evidence Test (p. 41-50).

Chapter Three then presents and explains the broad outline of 'Christianity as a Worldview.' His goal is to 'clarify the central claims of the Christian worldview' (p. 52). This is important, since non-Christians and even churchgoers often misunderstand and misrepresent what the Christian faith actually claims and teaches. Anderson explains the Christian definition of God and His Trinitarian nature. God is absolute, independent of creation, eternally existent, self-sustaining, sovereign, and so on. Man is a creature, made by this self-same God, and accountable to Him. In addition, mankind is fallen, and in rebellion against God and His authority.

Attendant to this is the Christian assertion that God speaks. He speaks in and through His creation. In the past, he chose prophets through whom He spoke His desired message - Abraham, Moses, Joshua, Elijah, and so forth. In the New Testament, God has come into the world in the person of His Son, and spoken quintessentially through Jesus. In speaking, God is not the cosmic 'clock winder' of deism. In speaking, God communicates His desire to save, that is, to deliver men and women from the power and dominion of sin. All of history, including the entrance of sin into the created order, is under God's sovereign authority and control. God has a purpose for sin's entry into history. Like a play, God's history as presented in the Bible has four acts: Creation, Fall, Redemption, Consummation. This is the broad, overarching Christian view of cosmic history.

Chapter Four turns its attention to the omnipresence of God, 'God is There.' If true, then His omnipresent goodness, power, holiness, wisdom and knowledge impact everything in creation. This is essential to the Christian worldview. Conversely, naturalism necessarily implies that all of creation is ultimately non-personal, non-rational and non-moral (p. 99). Its perspective is radically different, and obviously so is the perspective of a person trying to hold a worldview consistent with naturalism. By distinguishing these two worldviews, Anderson lays out six basic arguments concerning 'proof' for the existence of God: 1 - God and Existence, 2 - God and Values, 3 - God and Morality, 4 - God and Reason, 5 - God and Mind, and 6 - God and Science. Anderson is not presenting 'proof' for God per se, but rather lays out major categories within a worldview and the kind of pre-conditions that are required for these areas of life to be coherent. In the end, Anderson concludes God's existence does not need to be 'proven,' but must instead be presupposed for these areas of human activity to have any rational basis. 'The grand irony is this: if it weren't for God, there would be no rational thinkers at all and no universe to be rationally understood' (p. 138). Since God has revealed Himself plainly in creation and in the Bible, and He is the necessary pre-condition for all of creation, it follows that the person who denies God's existence has an internal problem, not an external one. That is, he has a sin problem.

In Chapter Five, Anderson builds on the Christian claim that God speaks. Or, put conversely, 'God is not Silent.' First, he addresses the issue of 'hearing God's voice.' Does God speak and can He be heard? Anderson does not try to prove God is heard, rather, his goal is to explain that this is what Christianity teaches, and why it makes sense. He argues that a 'God-Speaks worldview is more coherent than a God-Doesn't Speak worldview' (p. 144). God is personal, so of course He speaks. In that vein, Anderson rightly urges the reader to read the Bible for his or herself, that the skeptic might accept the fact that he is really hearing the voice of God.

Anderson addresses the question of how God has spoken. First, instead of only speaking privately to individuals, He has spoken in a manner that makes His words publicly accessible. Thus, He has spoken to humanity in general, not just to particular groups. He has done so by having His communication written down by chosen men in the form of the Bible. This method not only makes His words publicly accessible and objectively verifiable (as opposed to ongoing, private individual revelations), it also makes His words available to future generations long after the deaths of the men who have penned the words of Scripture (p. 150).

Anderson then turns his attention to the three major religions that teach a doctrine of an absolute God who has provided man with a written revelation: Christianity, Judaism and Islam. Judaism is insufficient because its Scriptures, the Old Testament, are clearly incomplete. Christians, of course, claim that the OT has been completed in the New Testament in the person of Jesus.

Islam's Quran has different problems. First, it draws on the Bible as a source of divine authority. In fact, it leans quite heavily on the Bible. But, the Quran also claims the Jews and Christians have changed it, so it cannot be trusted. This argument is refuted by manuscripts of the Old Testament that predate Muhammed (600 AD). The Quran affirms and contradicts those same scriptures which it claims are corrupted (p 158), creating a contradiction. Second, while rejecting the Christian doctrine of the Trinity, the Quran also mispresents the Christian doctrine, implying that Christians worship three gods: Allah, Jesus and Mary. Thus, the Quran is actually in error when it describes Christianity's Trinitarian description of God. A book that allegedly comes from God should not err when it describes what Christianity teaches. This brief interaction with the Quran is a helpful apologetic, but requires more examination.

In Chapter Six, Anderson explains how God is with us, as the chapter focuses on the person of Jesus, the God-man. Anderson explains the Christian doctrine of the Incarnation, why God became man, Jesus' self-identification as God in the flesh, and how the doctrine makes sense theologically, while also remaining a mystery to our finite minds. Mystery does not invalidate the doctrine, but rather is consistent with a worldview that involves an absolute God with infinite knowledge. Anderson points out that all worldviews must 'concede mystery at points. The question is whether the worldview as a whole justifies accepting those mysteries' (p. 188).

Chapter seven deals with the issue of death, and how Jesus overcame it by virtue of His resurrection. Christianity is unique in that it provides a solution to the problem of death. The resurrection of Jesus also directly confronts all worldviews that deny miracles. The Resurrection is the quintessential miracle, par excellence. Anderson outlines the reasonableness of accepting the Resurrection as an historical event, and also points out that there is no logical alternative but to accept the resurrection of Christ, an argument that has been made in great detail by many other scholars. In the end, if Jesus truly defeated death, then all His words are true. Everything he said is trustworthy, including His statements about the Old Testament, God, and Himself. The Resurrection vindicates everything in the Christian worldview.

I would recommend this book for both the church and for sincere seekers who want to know what Christianity really claims and teaches. High school students in the church would be well served by this book, as Anderson's work lays a proper foundation for them.