Review of Digging Deeper Into the Word

Dale Manor currently serves as Professor of Archaeology and Bible at Harding University in Searcy, Arkansas. His recent volume, Digging Deeper Into the Word, is slim but packed with helpful information for those wishing to know more about the intersection of archaeology, the Bible, and Christian apologetics... 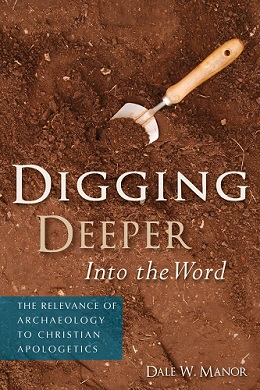 This book is available in the ABR online bookstore.

The book consists of four chapters. The first provides a survey of archaeology and the contributions it makes to our understanding of the past. This includes ancient customs, technology, trade, government, and religion. This helps readers understand that archaeology is a legitimate science-not a treasure-hunt or a predominantly apologetics-based exercise. This is a helpful corrective to the popular assumption that biblical archaeology is concerned chiefly with proving the Bible true.

The second chapter is a curious one, given the nature of the material. Focusing primarily upon the early second millennium BC, Manor takes the readers on an archaeological tour of the Near East at the time of Abraham. Of all the sections of Scripture, the patriarchal narratives are some of the most beleaguered. However, in light of the absence of absolute proof for the patriarchs' existence, Manor shows just how closely the biblical text aligns with the portrait of Canaan painted by the archaeological data. This is particularly valuable in a time when the Bible is assumed to be a mythological creation floating free of any real historical context.

One of the most well-known military engagements of Scripture is the siege of Jerusalem during the time of Hezekiah c. 701 BC (2 Kings 18; Isaiah 36-37). Manor spends the third chapter discussing this conflict and its historical background. He discusses the Assyrian war machine as well as the defensive measures taken by the Judeans prior to Sennacherib's invasion as reflected in the archaeological record.

The fourth chapter focuses upon ancient inscriptions, many of which corroborate the biblical text. Many of those highlighted will be well known to readers (e.g., the Merneptah Stele, the Tel Dan Inscription, the Cyrus Cylinder). Others are less well known but are the focus of heated debates over the nature of ancient Israelite religion (e.g., the Kuntillet 'Ajrud and Khirbet el-Qom inscriptions). Given the particular value of inscriptional evidence, these finds highlight the connections between the biblical text and the ancient world.

He dispels some of the most common myths about archaeology, including its sensational nature (thanks to films such as those in the Indiana Jones franchise), the fact that archaeology can 'prove' the Bible in the same manner as a logical proof or scientific experiment conducted in laboratory conditions, or that archaeology provides all the answers we desire. Although this is common knowledge among those with experience in the field, it challenges some of the assumptions held by some believers, especially those popularized in the media.

Manor makes judicious use of both the archaeological data and relevant biblical passages. His work is a breath of fresh air coming from one in a field populated by many who would distance the discipline of archaeology from the Bible. While some believers try to press the evidence too far in supporting the Bible, critics go too far in dismissing it. In a relatively short book (but well-illustrated), there is insufficient space to discuss matters too deeply. Still, readers will no doubt be very pleased to see the many connections between archaeology and the biblical text that demonstrate the reliability and veracity of Scripture.