Author: Bryant G. Wood PhD
Category: Conquest of Canaan under Joshua & the Inception of the Period of the Judges 1406-1371 BC
Created: 11 November 2011

Evangelical scholars are divided as to when the Exodus-Conquest events took place.

The Berlin Topographical Statue Base Relief

The chronological data in the Bible, however, clearly indicates that these events transpired in the 15th century BC, the Exodus occurring in 1446 BC and the Conquest 1406-1400 BC (Wood 2008: 100). Now, for the first time, we have evidence from an Egyptian source which supports the earlier Biblical dating.

That source is an inscription housed in the Egyptian Museum in Berlin. It appears on a gray granite block 18 in (46 cm) high, 16 in (39.5 cm) wide and of unknown thickness since it was cut from a larger piece. According to the Museum's records, the block, most likely part of a statue base, was acquired in 1913 by Ludwig Borchardt from an Egyptian merchant. Borchardt (1863-1938) was a German Egyptologist who is best known for his excavations at Tell el-Amarna where he discovered the famous bust of Nefertiti, queen of Akhenaten (ca. 1350-1334 BC).

The inscription is comprised of three name rings superimposed on Western Asiatic prisoners, the rightmost of which is only partly preserved due to substantial damage, probably incurred when the block was removed from its original context. Above the heads of the prisoners is a partial band of hieroglyphs which reads '…one who is falling on his feet…' The inscription was first published in 2001 by Manfred Görg, Professor Emeritus of Old Testament Theology and Egyptology at the University of Munich (Wood 2005a). The first two names are easily read-Ashkelon and Canaan. The name on the right, however, is less certain. Görg restored the right name as Israel and dated the inscription to the reign of Ramesses II (ca. 1279-1212 BC) in the Nineteenth Dynasty, based on a similarity of names to those on the Merenptah Stela (ca. 1210 BC).1 Görg also concluded, based on the spellings of the names, that they were copied from an earlier inscription from around the time of Amenhotep II (ca. 1453-1419). Israeli Egyptologist Raphael Giveon (1916-1985) previously dated the inscription to the reign of Amenhotep III (ca. 1386-1349 BC) (1981: 137). If these two scholars are right, this extra-Biblical Egyptian inscription would place Israel in Canaan at about the time of the Biblical date for the Conquest. 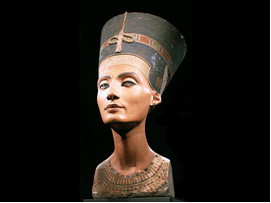 Bust of Nefertiti from Tell el-Amarna, now in the Egyptian Museum in Berlin. (Photo by Michael Luddeni.)

The Berlin inscription now has been analyzed in greater detail and republished by Görg and two other German scholars-Dr. Peter van der Veen, Instructor of Old Testament and Biblical Archaeology at the University of Mainz, and Christoffer Theis, M.A., Lecturer at the Institute of Egyptology, University of Heidelberg (2010). The new study confirms the earlier conclusions of Görg.

The authors point out that the names Ashkelon and Canaan largely were written consonantally and thus are closer to Eighteenth Dynasty examples from the reigns of Tuthmosis III (ca. 1504-1450 BC) and Amenhotep II, than to those from the times of Ramesses II and Merenptah (van der Veen, Theis and Görg 2010: 16). In addition, ethnic renderings ('Canaanites') in the inscriptions of Amenhotep II are similar to the name on the Berlin fragment, providing further evidence for an early date (van der Veen, Theis and Görg 2010: 16).

The third name presents difficulties because of the broken nature of the right side of the inscription. A detailed examination of the relief, however, allowed the authors to reconstruct the name as Y3-šr-il ('Ishrael'), a name very close to Biblical ysr'l ('Israel') (van der Veen, Theis and Görg 2010: 17-18). The theophoric element il, 'God,' at the end of the name is written in a shortened form which again argues for an early date since the shortened form was in use prior to the reign of Amenhotep III (ca. 1386-1349 BC) (van der Veen, Theis and Görg 2010: 16).

Topographical statue base relief fragment depicting three Canaanite place names superimposed on Western Asiatic captives. The relief was purchased in Egypt in 1913 and is now in the Egyptian Museum in Berlin. (Photo from van der Veen, Theis and Görg 2010: 16.)

The major difference between the name on the inscription and the Biblical name is that the inscription has 'sh' rather than 's.' This difference caused James Hoffmeier to reject the identification of the name on the inscription as that of the Israel of the Old Testament (2007: 241). But the authors point out that there is no known candidate for the name in the vicinity of Canaan and Ashkelon other than Biblical Israel (van der Veen, Theis and Görg 2010: 18-19, 20). It is entirely possible that the 'sh' spelling is an archaic form, or perhaps the cuneiform rendering (van der Veen, Theis and Görg 2010: 19). Moreover, Egyptian scribes were not consistent in their usage of the hieroglyphs for 'sh' and 's', and quite often interchanged them (van der Veen, Theis and Görg 2010: 19-20).

In summary, the authors of the new study believe that the name on the Berlin statue base fragment is that of Israel and that it was part of a name list originally written in the Eighteenth Dynasty. This is much earlier than the appearance of the name Israel on the Merenptah Stela. Furthermore, they conclude that their findings 'indeed suggest that Proto-Israelites had migrated to Canaan sometime during the middle of the second millennium BCE' (van der Veen, Theis and Görg 2010: 21).

2007 What is the Biblical Date for the Exodus? A Response to Bryant Wood. Journal of the Evangelical Theological Society 50: 225-47.

11_11_11 New Evidence Supporting the Early (Biblical) Date of the Exodus and Conquest.pdf