Jericho: Does the Evidence Disprove or Prove the Bible?

Author: Jerold Aust
Category: Conquest of Canaan under Joshua & the Inception of the Period of the Judges 1406-1371 BC
Created: 30 January 2009

This article was first published by ABR in the Spring 2003 issue of Bible and Spade.

The city had already been occupied for many centuries before the Israelites arrived. It had an inner wall and an outer fortified wall, several feet thick, enclosing about 9 acres of land. To the Israelites entering the Promised Land, Jericho presented a major obstacle.

According to the Bible, Joshua and the Israelites crossed the Jordan in the springtime and then celebrated the Passover on the plains outside Jericho, eating some of the fresh grain of the land since it was harvest time (Jos 3:15-17; 5:10-12). For seven days the Israelites marched around the city, accompanied by priests blowing trumpets. On the seventh day, after their seventh circuit around the city, the priests blew their trumpets, the people shouted, and the walls of the city, as the old song goes, 'came a-tumblin' down.'

Then the people went up into the city, every man straight before him, and they took the city. And they utterly destroyed all that was in the city...with the edge of the sword' (Joshua 6:20-21, NKJV). 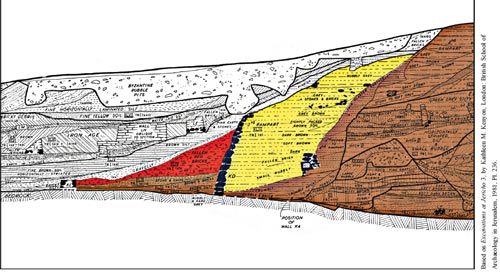 Section drawing of the north balk of Kathleen Kenyon's 1950s west trench through the fortification system at Jericho. The yellow area is what remains of the earthen embankment that surrounded the tell at the time of the Conquest. It was held in place by a stone retaining wall. Atop the retaining wall and also at the crest of the embankment there were once mud brick walls. When the walls collapsed (Jos 6:20), they were deposited at the base of the retaining wall, shown.

Only Rahab, who had hidden the Israelite spies, and her family were spared from the destruction (Jos 6:17, 22-26). The Israelites burned the city and all that was in it (vs 24). Over later centuries other peoples occupied, built on and abandoned the same site many times. Eventually it grew into a huge mound of earth and rubble several dozen feet high.

In the 19th and 20th centuries several organized excavations were carried out at the site. The most notable were those of the British archaeologists John Garstang (1930-1936) and Kathleen Kenyon (1952-1958). Garstang found fallen city walls, burned stores of grain and evidence of destruction of the city by fire, all of which he dated to about 1400 BC-right in line with the Biblical chronology of the city's destruction.

Kathleen Kenyon found much of the same evidence-collapsed walls, stores of grain and an ash layer from a massive conflagration. However, she reached a completely different conclusion. Rather than supporting the Biblical account, her finds at Jericho, she said, disproved the Biblical story. Why? She dated the city's destruction to around 1550 BC, meaning the site had been abandoned and therefore there was no city for the Israelites to capture at the time of the conquest. 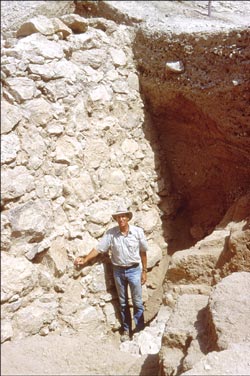 Jericho retaining wall from the time of the Conquest that held in place an earthen embankment, Italian-Palestinian excavation, 1997. The Israelites marched around this wall for seven days. When the mud brick city walls collapsed, they were deposited at the base of the retaining wall forming a ramp by which the Israelites could enter the city (see drawing).

Her statements had a major impact on the scholarly world. Many hailed her findings as proof that the Bible was historically unreliable, that it couldn't be trusted. The only logical conclusion, agreed the scholars, was that its supposed historical annals were but myth fabricated much later in Israel's history. This became the accepted reality, entrenched in archaeological and academic circles.

Kathleen Kenyon died in 1978. However, detailed reports on her findings at Jericho weren't published until 1981-1983. Several years later, when archaeologist Bryant Wood-then a visiting professor at the University of Toronto-examined her findings, he was surprised to find that 'Kenyon's analysis was based on what was not found at Jericho rather than what was found' (1990:50).

He realized she had based her dating on the fact that she did not find a particular kind of imported pottery found at other sites in the Near East-thus Jericho must have been unoccupied at the time. The problem, Dr. Wood learned, was that she had excavated in a poor section of town in which the inhabitants could not have afforded to buy and use such imported pottery.

More surprising still, he discovered that Kathleen Kenyon actually had found indigenous pottery that dates precisely to the time of the Biblical conquest of the city, but inexplicably ignored it. She also overlooked the fact that her predecessor, John Garstang, had found painted pottery from the time of the conquest. Egyptian amulets he found at a nearby cemetery also indicated the site was regularly inhabited from several centuries before until right around the Biblically derived date of the city's fall. Thus there was no occupation gap as she had supposed.

In spite of such major problems with her conclusions, Kenyon's view remains entrenched in the minds of many to this day. Yet in reality what Kenyon, Garstang and other excavators have found at Jericho correlates precisely with the account in the book of Joshua. They found collapsed walls, not walls that were broken down from the outside but that had fallen down (Jos 6:20). The walls had not fallen inward, but outward, creating a ramp of fallen bricks by which the Israelites 'went up into the city, every man straight before him' (Jos 6:20).

The unusually large stores of carbonized grain found in the ruins showed that the city had endured only a short siege, which the Bible numbers at seven days (Jos 6:12-20), and that the grain had been recently harvested (Jos 3:15). Also, because grain was a valuable commodity almost always plundered by conquering forces, the large amount of grain left in the ruins is puzzling-but consistent with God's command that nothing in the city be taken except valuable metals to be used for the treasury of the LORD (Jos 6:24).

The city had also been burned, exactly as the Bible records (Jos 6:24). As Kathleen Kenyon herself noted:

The destruction was complete. Walls and floors were blackened or reddened by fire, and every room was filled with fallen bricks, timbers, and household utensils; in most rooms the fallen debris was heavily burnt, but the collapse of the walls of the eastern rooms seems to have taken place before they were affected by the fire (Wood 1990:56).

As she observed, the walls had collapsed before the city was burned-again, exactly as the Bible states. 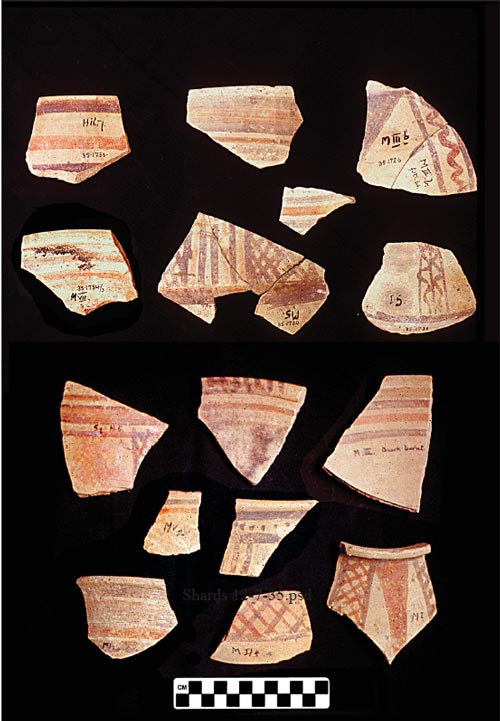 Pottery found by John Garstang in the 1930s in the destruction layer at Jericho (note evidence of burning). This distinctive pottery, decorated with red and black geometric patterns, was in use only in the later part of the 15th century BC, the time of the Israelite Conquest according to Biblical chronology.

Archaeology-subject as it is to archaeologists' decisions, interpretations and even biases-is admittedly not an exact science. Yet, when viewed objectively, the evidence uncovered at Jericho precisely fits with the Biblical account. Rather than disproving the Bible, when findings from Jericho are correctly interpreted, the exact opposite is the case. In all aspects of the Biblical account that can be verified by archaeology, the evidence from Jericho supports the accuracy of the Bible in every detail. (Reprint by permission from GoodNews 7.2 [2002]: 10-11).