Historical Synchronisms and the Date of the Exodus

For those that hold a high view of Scripture and believe the Hebrew Exodus from Egypt actually happened, there are two major positions today regarding when that event occurred: the so-called Early Date, which places the Exodus in the mid-15th century BC, most probably during the reign of Amenhotep II, and the so-called Late Date, which posits Rameses II (ca. 1279-1212 BC) as the Pharaoh confronted by Moses. Much has been written in defense of both these views. It is the purpose of this article to take a fresh look at Rameses II as Pharaoh of the Exodus in light of both Biblical and Assyrian chronologies. Is it likely, or even possible, that Rameses II could have been the Pharaoh of the Exodus?

First, let us observe Biblical events and personages between the Exodus and a known date in Near Eastern history, the date of the famous Battle of Qarqar, where a coalition of western kings defeated Shalmaneser III of Assyria. It is accepted, thanks to astronomical data and our solid knowledge of Assyrian chronology, that the battle took place in 853 BC. It is also known that Ahab, king of Israel, was a participant in the battle. Shalmaneser III tells us so in his records regarding Qarqar. Ahab almost certainly died later that same year.1

How long a period of time does the Bible demand between the Exodus and the death of King Ahab of Israel? If we take the Biblical year totals seriously, quite a lengthy period is required. The Exodus was followed by 40 years of wandering in the wilderness, and then by a long but not absolutely calculatable period for the Conquest and the period of the Judges. While it is likely that there is some overlap among the judges, it still seems necessary to allot between 300 and 400 years for the wanderings, conquest, and days of the judges. 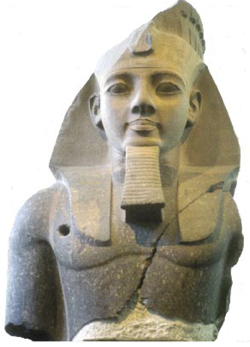 Rameses II, ruler of Egypt for 67 years, ca. 1279-1212 BC. Called 'the Great' because of his military exploits and construction projects, his statues and buildings can still be seen in Egypt today. Even his mummy is on display at the Egyptian Museum in Cairo. He also had a great family by his several wives-at least 45 sons and 40 daughters! The tomb of his sons has recently been found in the Valley of the Kings in Thebes. According to the popular, but anti-Biblical, theory of a 13th century Exodus, Rameses II is thought to be the Pharaoh of the Exodus. Statue from Thebes, now in the British Museum. Credit: Bryant Wood

After the judges, the period of the United Monarchy lasted ca. 120 years (according to the Bible, 40 years each for Saul, David, and Solomon). After the death of Solomon, the kingdom of Israel divided into northern and southern kingdoms, Israel and Judah. From this division to the death of Ahab, using the most probable calculations on divided monarchy chronology, was just short of 80 years.

Combining all of these numbers and assuming only 300 years for the time before the United Monarchy, we see that, if we take the Biblical numbers as realistic, the time between the Exodus and the battle of Qarqar was approximately 500 years. But if we expand the period of the wanderings, conquest, and judges to 400 years, we would need 600 years. The point is this: if Rameses II reigned from 1279 to 1212 BC, as most Egyptologist now believe, there are not enough years for all of the periods mentioned above.

If the Exodus occurred about 1250 BC, in the middle of the reign of Rameses II, there would be about 400 years between him and the Battle of Qarqar. This is at least a full century too little, and perhaps twofull centuries if we use 400 years for the ages between the Exodus and the United Monarchy. Either way, Rameses II is unacceptable.

When calculations of this kind are undertaken, it is a good thing to check our work from a different angle. Today there are those who would abandon orthodox Egyptian chronology and replace it with one of a number of radical reconstructions. While these reconstructions seem totally without merit, it is still worth our while to examine the possibility that Rameses II did not really live in the 13th century BC at all. 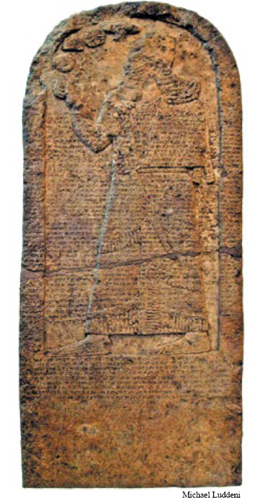 Kurkh Stela depicting Shalmaneser III king of Assyria. Found in Kurkh, Turkey, now on display in the British Museum this stone monument records campaigns against the Arameans in Syria. The campaign of year six, 853 BC mentions Ahab, king of Israel, as being a member of an anti-Assyrian coalition that confronted the Assyrians at Qarqar in western Syria. The section referring to Ahab reads, 'I approached the city of Qarqar. I razed, destroyed and burned the city of Qarqar, his [Irhuleni the Hamathite's] royal city. 1,200 chariots, 1,200 cavalry, (and) 20,000 troops of Hadad-ezer (Adadidri) of Damascus; 700 chariots, 700 cavalry, (and) 10,000 troops of Irhuleni, the Hamathite; 2,000 chariots, (and) 10,000 troops of Ahab, the Israelite...' (Younger 2000:263).

There is a way to verify the century of Rameses II using the well-know and well-accepted Assyrian chronology.2 This involves the use of synchronisms, or established contacts between rulers of different nations that prove they were contemporaries. Using the modern world as an example, we know that Kaiser Wilhelm II of Germany was a contemporary of Woodrow Wilson, the President of the United Sates. We know that because they fought each other in World War I. Similarly, Robert E. Lee was a contemporary of Abraham Lincoln, for the same reason. They fought each other in a war.

Rameses II was a great Egyptian king who ruled 67 years, built lavishly, fought wars with the Hittites and other nations, and concluded international treaties. His reign is well known. One of his major accomplishments was a major treaty with the great Hittite king Hattusilis III. We have both the Egyptian and the Hittite versions of this famous document.

Closeup of Shalmaneser III, on the famous Black Obelisk of Shalmaneser found at Nimrud, ancient Calah, Iraq, in 1846. This 2m (6 ½ ft) tall, four-sided polished black stone monument is now on display in the British Museum. Although not mentioning Ahab, the obelisk's cuneiform text does mention another king of Israel. On one side, the second register from the top depicts a man kneeling before Shalmaneser with the inscription, 'Tribute of Jehu son of Omri.' Jehu ruled ca. 841-814 BC and he probably paid tribute to Shalmaneser in the first year of his reign. 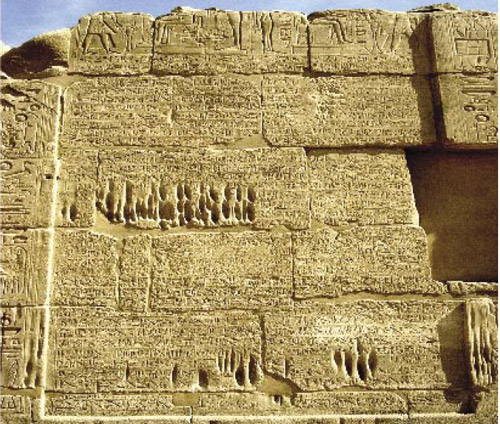 One of the Egyptian copies of the treaty between Rameses II and the Hittites carved into a wall of the Temple of Amun at Karnak. After 20 years of fighting, the treaty was concluded in Rameses II's 21st year, ca. 1258 BC, corresponding to the later part of the period of Judges in Biblical history. Thirteen years later the treaty was further cemented by the marriage of a Hittite princess to Rameses II. A Hittite copy of the treaty was discovered on two clay tablets written in Babylonian cuneiform found at the Hittite capital of Boghazköy in Turkey.

In conclusion, it seems nearly impossible to date the Exodus in the times of Rameses II. There is simply not enough time for all the periods of Biblical history between that seminal event and the last years of Ahab, King of Israel.

1. For evidence and details for all this, see any standard history of Israel, or a good history of Assyria, such as Saggs, 1990.

2. There are some possible revisions in middle Assyrian chronology, but none of the propose changes extend about a decade.