The Ineffable Name of God

From the Bible and Spade Archives

There are a number of words used for God in the Old Testament, but the one that is most puzzling to Bible scholars is the name Yahweh. Hebrew grammarians cannot be sure of the exact spelling of the NAME because, originally, Hebrew was written without vowel letters. It appeared as YHWH in the text, the so-called “Tetragrammaton”. The vowels in the name of Yahweh, therefore, are an educated guess.

The Tetragrammaton in the Ketef Hinnom silver scrolls with the Priestly Blessing from the Book of Numbers (c. 600 BC).

The NAME was too sacred to be pronounced by the ancient Hebrews, so when they came to it in the biblical text they would say the word for “Lord”. When Hebrew became a dead language and vowels were added to the consonantal text in the Christian era, the vowels for the word “Lord” were used with the Tetragrammaton. This led to the peculiar transliteration of the NAME as “Jehovah” in the King James Version of the Old Testament. Many times, however, the King James translators simply rendered the NAME as “Lord”.

Yahweh is a distinctive name for God used only by the Hebrews so far as we know, and despite somewhat wild speculative theories in our current day. What scholars have been trying to determine for centuries is where the NAME came from and what it’s root meaning is.

The NAME undoubtedly derives from the Hebrew verb “to be”. In Exodus 3:14 an explanation of the meaning of Yahweh is apparently given to Moses by God Himself. The difficulty here is in understanding the full meaning of the original Hebrew. It is translated as “I am that I am” in the King James Version. In 1909 Paul Haupt suggested that it meant “I call into being what will be.” William F. Albright, in 1924, correlated this explanation with the use of sentence names in the ancient Near East and came up with “He causes to be. He creates.” Other sentence names have been suggested based on the uses of the NAME in other passages of the Old Testament.

William H. Bownlee reviewed the meaning of 1Yahweh by examining the use of the NAME in the Dead Sea Scroll text of 1 Samuel 2:3b. In the King James Version it reads, “the Lord (Yahweh) is a God of knowledge, and by him actions are weighed.” The usage of this verse at Qumran, however, indicates that a more accurate translation would be “The God of knowledge makes things happen, or come into being.” Brownlee believed that the Qumran usage of the NAME shows that it means not simply “to come to be” but “to cause to happen.” Thus Yahweh was understood as referring not only to God’s work of creation, but also to His preservation and providential control.

This moves the term from a simple reference to God as Creator to a depiction of God’s role in salvation history. Brownlee observed that the understanding of Yahweh as “One who causes things to happen” better fits Moses’ announcement of Yahweh’s deliverance of the Hebrews from bondage in Egypt: “Slaves are not necessarily rebellious and ready to follow any leader who promises them liberty; they may be utterly demoralized and fully resigned to their bondage. Their situation seems hopeless, and they dare not to make the slightest protest, lest the oppressor bear down upon them harder than ever. Such was the case of the Hebrews in Egypt, so that what thy needed to overcome their despair was the assurance that they had a God who could make things happen, who could bring to pass the promises He had made  to them through Moses. 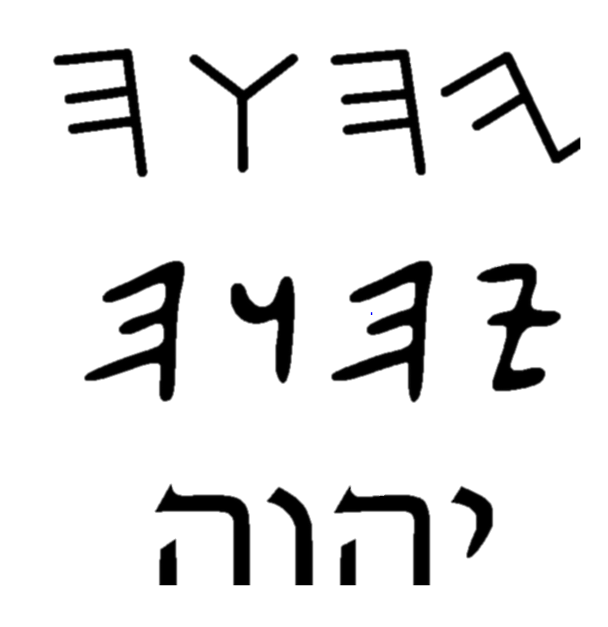 “This gives the revelation of the NAME to Moses the kind of relevance that Gerhard Von Rad was seeking in interpreting this in the light of Exodus 3:12, ‘I will be with you.’ Thus for him the meaning of Yahweh is ‘being present, being here.’ In the etymology given here, it is God’s redeeming presence of which the Bible speaks. Note particularly Exodus 6:6: ‘Therefore say to the children of Israel: “I am He who makes things happen, and I will bring you out from under the burdens of the Egyptians, and I will deliver you from their bondage, and I will redeem you…” ‘ This understanding of the Hebrew prophets, especially in the contexts of threats and promises, where ‘I am Yahweh,’ may appropriately mean ‘I am He who makes things happen.’ “

The theological importance of this interpretation is far-reaching. God is not just a God who created the world and left it to run its own, but He is continuously active in history and in the lives of individual believers.