Jesus and the Sea of Galilee

According to the gospels, Jesus' earthly ministry centered around the Sea of Galilee. While important events occurred in Jerusalem, the Lord spent most of the three years of His ministry along the shore of this freshwater lake. Here He gave more than half of His parables and here He performed most of his miracles...

This article was first published in the Fall 2003 issue of Bible and Spade.

According to the gospels, Jesus' earthly ministry centered around the Sea of Galilee. While important events occurred in Jerusalem, the Lord spent most of the three years of His ministry along the shore of this freshwater lake. Here He gave more than half of His parables and here He performed most of his miracles.

Capernaum, on the northwestern shore, became Jesus' 'hometown' throughout His ministry. Three of His disciples hailed from Bethsaida, a few miles distant from Capernaum. These two cities, together with Chorazin 3 km (2 mi) inland from Capernaum, were condemned by Jesus for receiving much but believing little. A famous follower of Christ was Mary of Magdala, a town on the lake's western shore. Early Christians hallowed the lakeside, building churches commemorating the feeding of the five thousand, the Sermon on the Mount, the primacy of Peter, and the house of Peter.

Known in the Hebrew Bible as Chinnereth, Josephus used the Hellenized form of this name, Gennesar or Gennesaritis, most frequently in his writings. Luke uses this term, but the more common New Testament designation is the familiar 'Sea of Galilee.' John twice refers to it as the 'Sea of Tiberias.' Pliny notes that some called it Tarichaeae after the name of another town along its shore.

Today Yam Kinneret, as Israelis know it, is the primary source of water for the nation and as such the government carefully regulates its outward flow to the Jordan River. The Degania dam was built in 1932 to control the water level and when the lake fills after good winter rainfalls, the Sea of Galilee is about 1 m (3.3 ft.) higher than it was in the time of Christ. This is apparent from the level of the harbors that have survived from the first century. 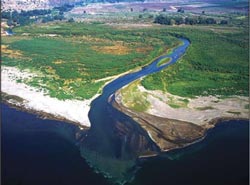 The Jordan River is the main source of water for the lake, supplying about 75 percent of the lake's annual intake. Direct rainfall provides another 8 percent and the remainder comes from springs and wadis in the area. Numerous springs are located around the Sea of Galilee, particularly along the northwestern shore, but because of the higher salinity of these waters, today many of these springs are diverted to flow directly into the Jordan River south of the lake. 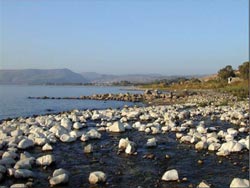 The Sea of Galilee is known for its violent storms, which can come up suddenly and be life-threatening for any on its waters. These tempests are caused by the situation of the lake in the Jordan Rift with steep hills on all sides. The cooler air masses from the surrounding mountains collide with the warm air in the lake's basin. Winds sometimes funnel through the east-west-oriented valleys in the Galilean hill country and rush down the western hillsides of the lake. The most violent storms, however, are caused by the fierce winds which blow off the Golan Heights from the east. One such storm in March 1992 sent waves 3 m (10 ft) high crashing into downtown Tiberias and caused significant damage to the city.

Aside from a few natural inlets on the northern side, the Sea of Galilee does not have any natural harbors. The fishing industry that grew up around the lake as early as the Early Bronze Age (3300-2300 BC) resulted in the construction of artificial breakwaters. The first ancient harbor was discovered at Kursi in 1970 and since then 15 additional harbors have been identified. Most assume that these were in use during the flourishing first century AD and it is certain that Jesus and his disciples were familiar with many of them. The harbors that the disciples most likely would have frequented were those at Capernaum, Tabgha, Gennesar and Magdala. The Capernaum harbor is particularly noteworthy as it extended for more than 800m (2500 ft) along the shore, a length greater than that of the city. 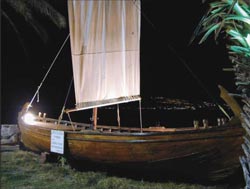 The presence of numerous and large harbors attests to the commercial importance of the lake during Jesus' life. (By contrast, today there are only five harbors on the lake and these are used primarily for boats for tourists.) Magdala apparently was the industrial center of the fishing trade, and fish to be exported were first salted here. Today 35 species of fish make their home in the waters of the Sea of Galilee and the Jordan River, but three types seem to be most common in the New Testament record. The sardines were a staple of the locals' diet and these were probably the 'two small 'fish' which Jesus used to feed the multitude. The musht fish has a long dorsal fin that resembles a comb and is today popularly known as 'St. Peter's fish.' This tasty fish could measure up to 0.5 m (18 in) and weigh 1.5 kg (3.3 lb). The third type is the catfish, which is not considered kosher because of its lack of scales. These probably would have been brought to mind when Jesus referred to the bad fish that would be thrown away (Mt 13:48).

The significance of the Sea of Galilee in Jesus' ministry is indicated by the fact that some of the first and some of the last events in His ministry occurred here. Shortly after the temptation, Jesus traveled to Capernaum with His family (Jn 2:12). Later Jesus would live in Capernaum and call four of His disciples from among the fishermen in the area (Mt 4). While He performed many miracles at points along the lakeshore, two of His most dramatic miracles were done on the water itself when He stilled the storm (Lk 8:22-25) and walked on the water (Mk 6:47-52). Following His resurrection, Jesus cooked breakfast on the shore for seven of the disciples (Jn 21).

The rabbis declared of the Sea of Galilee that, 'Although God has created seven seas, yet He has chosen this one as His special delight.' Certainly Jesus must have felt the same way. 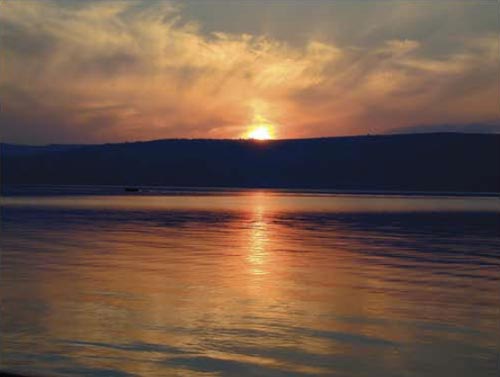 Sunset over the Sea of Galilee.