What if we reported that an ancient king from the Old Testament, an ally of King David, had been discovered? That we were in possession of a group of his inscriptions? Indeed, that his capital city had been located and intensive excavations were ongoing there to uncover his lost kingdom? Few things are certain in archaeology, and these facts are far from proven, but evidence for a long-lost kingdom is coalescing around a ruined city in southeast Turkey, not far from the biblical city of Antioch (Acts 11).

Who was this king and where was his kingdom? To answer that, we begin with several inscriptions discovered over many years that have recently taken on new meaning due to developments in the ancient language of Hieroglyphic Luwian.1 The first finds were in the area of Hamath in Syria, where inscriptions were noted as early as 1812 and recovered in 1872 (Hawkins 2000: 398). These bore the name of one King Taita, “Hero2 of the Land of Walastin” (MEHARDE, SHEIZAR inscriptions, Hawkins 2000: 415f). Much more about the city of Hamath was revealed during excavations conducted on the mound by a Danish team (1931-1938), most of which concerned a powerful Aramaean kingdom that arose contemporary with biblical Israel during the divided monarchy (Fugmann 1958). Traces of the earlier city of the presumed King Taita were found primarily in cemetery remains (Riis 1948).

Excavations undertaken by the University of Chicago (1934-1938) at the site of Tell Ta‘yinat in the Amuq Valley near Antakaya (ancient Antioch) uncovered impressive remains of a Neo-Hittite city that was contemporary to Hama. It featured monumental architecture, bit hilani palaces3, and tripartite temples arranged around a central plaza (Haines 1971). Numerous more fragmentary stone inscriptions were found in the Hieroglyphic Luwian language, one of which bore the ethnicon Wadasatinean, or “of the land of Wadasatini” (Hawkins 2000: 365). Other later inscriptions of the Neo-Assyrians mentioned a kingdom having the alternate names of Patina or Unqi (Aramaic "valley, plain"), the latter of which was in the language of the Aramaeans. The former name suggests a derivation or shortened version of the name Padasatini/Wadasatini. Unfortunately, little if anything was uncovered that related to the Early Iron Age kingdom. Only small portions of an apparently monumental palace complex that predated the later Neo-Hittite one were revealed (Bldgs. XIV and XIII. Haines 1971: 64, pls. 94, 95). The dimensions of Bldg. XIV were quite impressive, however, measuring 164 x 328 ft (50 x 100 m) with mudbrick walls 6.5-13 ft (2-4 m) thick.

For many years little research took place pertaining to the mysterious kingdom of Padasatini/Wadasatini until the chance discovery of a fantastic temple on the ancient mound of Aleppo, Syria in 1996 (Kohlmeyer 2000: 87-93; 2009: 190-202). Its walls were lined with amazingly well-preserved carved scenes featuring mythical creatures and people. The temple was dedicated to the Storm God, the chief deity of the Hittites, who during the Late Bronze Age was known as Teshub; later by the Luwians in the Iron Age as Tarhunta or Tarhunza. Centered on its east wall stood two life-sized figures, one belonging to the Storm God wearing the horned-headdress of a deity, a scabbard beneath his belt, and presumably a lightning bolt in his outstretched hand, now missing; the other of the shadowy King Taita, known previously only in the Hama inscriptions.

The lengthy Hieroglyphic Luwian inscription is carved into the relief literally emanating from the mouth of Taita, who is identified as “King and Hero of the Land of Padasatini,” as he stands facing the figure of the Storm God (Kohlmeyer 2009: 193, 198). The details of the temple carvings share many features with sculpture of the Hittite Empire period—based on the style of those features and on paleography4 of the inscription, the temple phase is dated to the 11th century BC. These are reported as agreeing with a radiocarbon date taken from wood beams at the site (Kohlmeyer 2009: 198), but there is room for skepticism on these points.

Naturally, these discoveries have generated much interest among scholars of the Early Iron Age in Syria and Anatolia. But discoveries have continued; most recently with two more Luwian inscriptions from the town of Arsuz, located on the Mediterranean coast south of the Turkish city of Iskenderun, previously Alexandretta. These appear to be associated, like those at Aleppo, with the dedication of a temple to the Storm God. The name of this king is Suppiluliuma, the king of Watasatini, who fashions himself, “the Hero” as did Taita in both Hama and Aleppo. Some may recognize this famous name from the Hittite Empire, the last ruler of which bore the name Suppiluliuma II. Unfortunately, the context and date of the Arsuz inscriptions is uncertain (they are yet unpublished). If the findspots of all the inscriptions (7) are mapped, what begins to emerge is a kingdom of considerable size and importance. 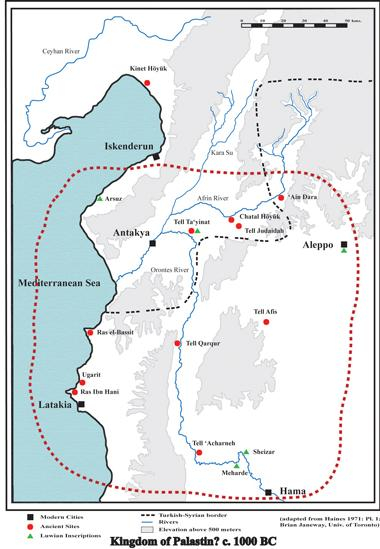 Recall the name of a kingdom known to have had its capital at Tell Ta‘yinat during the Iron II period—Patina or Unki. Excavations have shown that its monumental remains were befitting the capital of an important kingdom. In fact, it appears all but certain that the city’s name was Kunulua, known from Neo-Assyrian inscriptions—Tiglath-Pileser III conquered the city and deported its inhabitants in 738 BC, just a few years before he struck the Kingdom of Israel (2 Kings 15)—and cited by name in the Prophets Isaiah (10:9) and Amos (6:2), both of whom refer to the Assyrian destruction of the city (Calno and Calneh, respectively).

The monumental remains and epigraphic finds at Ta‘yinat led scholars to speculate that the well-established kingdom of Patina and the enigmatic kingdom of Padasatini/Wadasatini were Early and Later Iron Age versions of the same polity (Yamada 2000:96; Hawkins 2002:148 insert). The borders of the putative kingdom would encompass an area equivalent to the former Bronze Age kingdoms of Mukiš, Niya, and Nuhašše (Harrison 2009b:174). This area stretched from west of the Amanus Range (Arsuz) eastward to Aleppo in North Syria down the Orontes River Valley to Hama.

The similarity in the names Padasatini and Patina are obvious. The latter was explained simply as a shortened version of the first (Yamada 2000:96, n. 71). But now a new development was announced—that the Hieroglyphic Luwian signs traditionally read as during the Hittite Empire period changed to in the Iron Age—making Pa-da-satini into Pa-la-satini or Palastin (Reiken and Yakubovich 2010). David Hawkins was the first to publicly make this proposal and to equate the newly-coined kingdom with the biblical Philistines!

A New Kingdom of Philistines...?

Is there any evidence that a long-lost kingdom of Philistines existed in North Syria? As the readers of Bible and Spade know, excavations at Tell Ta‘yinat have produced a growing body of material—Mycenaean pottery, loomweights, possible Cypro-Minoan potmarks, and irregular dietary patterns as indicated by faunal remains5—that combine to demonstrate the arrival of a new group of settlers in the Amuq Valley (Janeway 2007; Lipovitch 2007; Harrison 2009a: 183), a finding reinforced by survey data showing the presence of locally-made Aegean-style pottery at sixteen new sites in additional to Tell Ta‘yinat (Verstraete and Wilkinson 2000: 188).

And what of King Taita, now emerged from obscurity as a powerful monarch of the Early Iron Age, possibly even descended from the great Hittite kings of the Empire? If such a king ruled over a large territory, is there mention of him elsewhere in ancient documents? So far the answer appears to be in the negative, at least not yet, unless you include the Old Testament, which brings us back to the city of Hama. Taita may have well been a contemporary—a friend and ally—to King David himself. The author of 2 Samuel knew him as Toi, King of Hamath (2 Sam 8:9-10; Tou in 1 Chron 18-9-10). David’s military victories over Hadadezer, King of Zobah and his Aramaean allies prompted Toi to send his son Joram as an envoy bearing gifts to the Israelite conqueror. For Hadadezer was warring against Toi, so forging an alliance with David made strategic sense. But how does Taita become Toi6 (Hebrew תּﬠיּ)?

The name Taita is presumed to be Hurrian, containing the root taḫḫe, meaning “man.” Numerous personal names bearing this root are documented at Nuzi and Emar (Steitler 2010: 94-5). The element –ta is identified in names from Nuzi, whose meaning is unclear. The final s is explained as the Luwian nominative ending. Secondly, given the frequent vowel shift from long vowel ā to ō in Canaanite (hence biblical ō in Toi) and the fact that both Josephus and the Septuagint contain first syllable a in the name, leads Steitler to assert that Toi’s name was originally pronounced with an initial vowel a.7

The final Hebrew letter yod (y) in the name is supported by both Josephus and Codex Vaticanus, such that the reconstructed Hebrew form Tāy is to be understood as an abbreviated form of the full Hurrian name Taḫḫe=ta, which when written in Luwian with the nominative ending equals Taitas.

So if Steitler’s reconstruction is accepted, and also that for new formulations of the hieroglyphic signs resulting in a shift from Padasatini into Palastin, then we have indeed found not only a “new” Old Testament king in Taita, but a new Philistine kingdom for him to rule! It remains to be seen whether these theories are proven true. There are doubtless new discoveries in store as excavations at Tell Ta‘yinat and elsewhere continue to reveal new secrets. For updates on the latest finds, visit the website at http://www.utoronto.ca/tap/ or subscribe to the ABR monthly newsletter and Bible and Spade magazine.

1. Hieroglyphic Luwian was an Indo-European language, one of the major languages spoken by the Hittites during the Empire period, which endured until approximately 1200 BC. Subsequently it survived in Neo-Hittite kingdoms of the Iron Age in the areas of southeast Anatolia and northwest Syria formerly controlled by the empire, until they in turn were conquered by the Neo-Assyrians in the 9th-8th centuries.

2. “Hero” was a common honorific title used by the Hittite kings of the Empire Period.

3. Bit Hilani palaces were an architectural innovation of the Neo-Hittites, subsequently borrowed by the Neo-Assyrians, which featured broad stairways, porticos, and a large throne room surrounded by secondary rooms and upper stories.

4. Paleography is the study of the development of scripts, particularly by the shapes of letters. The paleography of Hieroglyphic Luwian is still little understood.

5. Faunal remains are comprised of bone material collected and analyzed for the various species represented to give indications as to ancient diet and livestock practices.

7. The vowel o in the Chronicles variant (Tou) is explained as an error based on the easily confused Hebrew letters yod and vav.

Harrison, T.  2009b  Lifting the Veil on A ‘Dark Age’: Ta‘yinat and the North Orontes Valley during the Early Iron Age. Pp. 171-84 in D. Schloen, ed., Exploring the Long Durée: Essays in Honor of Lawrence Stager. Winona Lake, IN: Eisenbrauns.

Janeway, B. 2008   The Nature and Extent of Aegean Contact at Tell Ta‘yinat and Vicinity in the Early Iron Age: Evidence of Sea Peoples? Scripta Mediterranea 27-28:123-46.

Lipovitch, D. 2007   Modeling a Mycenaean Menu: Can Aegean Populations Be Defined in Near Eastern Contexts Based on Their Diet? Scripta Mediterranea 27-28:147-59.

Sass, B. 2005   The Alphabet at the Turn of the Millennium. Tel Aviv: Emery and Claire Yass Publications in Archaeology.

Yamada, S. 2000   The Construction of the Assyrian Empire: A Historical Study of the Inscriptions of Shalmanesar III (859-824 B.C.) Relating to His Campaigns to the West. Culture and History of the Ancient Near East 3. Leiden: Brill.