The Summer 2012 issue of Bible and Spade will soon be delivered to subscribers and members. 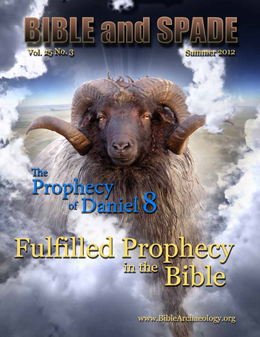 The fulfillment of prophecy in the Bible is one of the most powerful evidences of its divine origin, serving as a devastating apologetic against unbelieving arguments against the existence of God and the authority of the Bible. The prophet Isaiah's taunt in the face of demonic idols should engender confidence in our hearts that God is, indeed, in control of all things.

We ought to expect those presently outside the faith to have negative and wholly erroneous attitudes towards God and the Bible. Liberal scholars and skeptics distort and misconstrue prophetic texts to attempt to demonstrate that the Bible is in error. Thoughtful investigation into the text of Scripture and history illustrates that these attempts are in vain. Unfortunately, recent decades have seen the proliferation of so-called 'open theism' in some evangelical circles, the notion that God cannot see and does not control future events in history. These vain attempts by the finite, fallible and fallen human mind to fully reconcile sovereignty and free will, and/or the omnigood character of God and the presence of evil presently in creation end up relegating our Lord to the worthless pantheon of pagan idols. This is especially disconcerting when such an unbiblical conception of God is being promulgated by professing Christians. The Bible knows of no such notion of God, and Isaiah would certainly have been aghast at such a proposition. Instead of capitulating to human arrogance and trying to wrap our puny minds around the infinite mind of Yahweh, the Apostle Paul's doxological declaration ought to move us to bow in worship:

Oh, the depth of the riches and wisdom and knowledge of God! How unsearchable are his judgments and how inscrutable his ways! 'For who has known the mind of the Lord, or who has been his counselor?' 'Or who has given a gift to him that he might be repaid?' For from him and through him and to him are all things. To him be glory forever. Amen! (Romans 11:33-36 ESV)

In this issue of Bible and Spade, you will find a number of important articles bearing on the subject of prophecy. Dr. Paul Ferguson's excellent research on Tyre untangles secular attempts to throw Ezekiel 26:1-14 onto the scrapheap of prophetic failure. This thoughtful and important article illuminates the text of Ezekiel and the historicity of the city of Tyre. Kyle Butt discusses the historical context and fulfillment of prophecy found in Daniel chapter eight. Kyle's research shows the incredible historical accuracy of Daniel's prophecy, and exposes the fallacious reasoning of skeptics and other historians who try to place the writing of Daniel in the second century B.C. to avoid dealing with the prophetic implications contained therein.

ABR Staff Archaeologist Gordon Franz outlines the evidence for the colossal earthquake predicted two years in advance by the prophet Amos. Archaeological excavations throughout the region show evidence of this massive destruction. This momentous event seared impressions in the mind of the Israelite community for centuries, and significantly impacted the greater Ancient Near East. Lastly, ABR Board member Walter Pasedag shares his experiences at the Tall el-Hammam excavations in Jordan.

Fulfilled prophecy is, indeed, proof that the Bible is from God and that He is entirely in control of 'whatsoever comes to pass' (Westminster Confession of Faith 3:1). We pray that you will be strengthened in the knowledge that only the absolute, infinite, everlasting triune God of Scripture can know the future, for He indeed sovereignly controls and sees 'the end from the beginning' (Isaiah 46:10).

Watch the video: 'What is Bible and Spade Magazine?'