Inspiration: The Oracles of God

The Oracles 'To them were entrusted the oracles of God' (Rom 3:2, author's translation, as are all Scripture quotations henceforth).

Paul considered the OT Scriptures to be not impressions various writers had about God, nor simply an account quoting God. Rather, the Scriptures were the oracles1 of God-they were His speech. God committed to the Jews His oracles, and they thus carried in the Scriptures His original and continuing speech, so that the immediate presence of God accompanied Holy Writ. Thus, Stephen declared that Moses received the living oracles to give to us (Acts 7:38), and the New Testament writers wrote in the present tense, 'The Scripture speaks.'2 The presence of God in His Word is the essence of scriptural inspiration.

A scoffing attitude toward Scripture must not cloud our reason. Those who reject the idea of inspiration must either reject God, or reject the idea that God communicates with man. If we are not willing to reject God or His communication, the only issue left is whether the Bible is indeed His inspired Word, a question that should be resolved by testing the Word, rather than by testing the writers who must be-as we-subject to His miracles. The testing of the Word is not the province of this article, though it is of almost every other article in Bible and Spade. 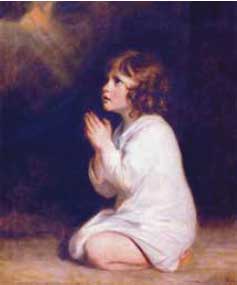 Credit: Reynolds 1776
The infant Samuel received the word of the LORD when he was near the oracle, the Holy of Holies.

The oracle is an OT idea also. There, designating the Holy of Holies chamber as the oracle (debir, Hebrew, a cognate of dabar, Hebrew, 'word' and of diber, Hebrew, 'to speak'), references both the written word of God on the Sinai stones (resident in the ark of the covenant in the Holy of Holies) and the continuing revelation that would come there to Moses (Ex 30:6). It likewise applies to the high priest, to Samuel the prophet (1 Sm 3:2-4), and to Zacharias the priest by the altar of incense just outside the Holy of Holies (Lk 1). The splitting of the Temple veil at the time of Christ's sacrifice (Mt 27:51) signified not only our free access to communion with God and to His salvific mercy, but also the breaking forth of God's oracular principle, so that shortly after the splitting of the veil, the writing of the NT began. God was ready to breathe new Scripture.

The Breath of God

Breath is the sign and substance of animal life (i.e., life that animates, vitality powered by the spirit).3 As God breathed into Adam and he became a living soul (Gn 2:7), as Jesus breathed on the disciples for them to receive the Holy Ghost (Jn 20:22), so the LORD breathed upon holy men, and they wrote the Holy Scripture (2 Pt 1:21). The breath of God, His Spirit, was in those writers and continues in His Holy Word today, so that inspiration imparted a quality to Scripture that has acquired no tarnish over the millennia separating Yahweh's original expression and our modern reading.

Thus, from the Eternal One the Scripture came forth as eternal principles expressed in words that are recorded for the ages. In that picture, Yahweh or Jehovah is the Eternal One; Logos (λ?γος, translated 'Word'), Christ's name in John 1, is the principle, the purpose, the meaning; Rhema (??μα4), associated with the Spirit (Jn 6:63, Acts 10:44, Eph 6:17), is the expressive or spoken word; Graphe (γραφ?), the Scripture, is the written word. Yahweh begot the Logos, Who sent the Rhema, Who inspired the Graphe. Thus the path of inspiration may be charted as:

The Men of God

It was holy men of God who were inspired to write the Scriptures. Such inspiration distinguishes Scripture from the prophecies, for example, of Saul, who was spiritually overcome, but was not a holy man (1 Sm 19:19-24). Before and after being overcome, Saul walked in strident wickedness. The writers of Scripture were wholly other. They were not respected or popular spokesmen for their Hebrew and early Christian cultures (or when they were, that was not the point). They were not philosophers whose worldly sophistication qualified them as general-audience writers. They were members of the eternal kingdom, God-empowered in their kingdom work, imbued with holiness from on high.

Inspiration, then, involves not only the speech of the Spirit, but His sanctifying presence, His hallowing redemption of sinful man, His cleansing of his heart, His purification of his tongue. The inspiriting is not a mere mechanical transfer, but an infusion of character. The Holy Ghost comes upon the humble writer, the power of the Highest overshadows him, and he brings forth the word.

Paul was difficult to understand (2 Pt 3:16). Isaiah was very bold (Rom 10:20). The writers had their individualities, yet all were kept by the one Spirit absolutely to the truth and to the express desire of God for each book, each sentence, each letter, each pen stroke. Christ, the Author, in the Sermon on the Mount (Mt 5:17f), would not have promised to fulfill Scripture, would not have declared the inviolability of Scripture to the point of each jot and tittle, had the Lawgiver and the prophets written of their own accord; if that were so, God would be subject to man. Rather, God elevated His chosen men to be the inscripturators of His truth. Christ fulfilled the Scripture carried from God to man: He recognized the Word as His own.

Exercisers of spiritual gifts? Yes, but much more. As the first-century Christians, when we exercise spiritual gifts, error is possible (1 Cor 14:9, 27-33). The writers of Scripture were borne along errorlessly, as if writing with the very finger of God.

The Finger of God, the Pen of Man

'And He gave unto Moses, at His completion of speaking with him on Mount Sinai, two tables of testimony-tables of stone-graven with the finger of God' (2 Pt 1:21).

God handed Moses a text that became a part of our Bible. Most Scriptures, however, were not delivered as a parcel, and each may fit under one of the following heads:

Dictation-John's letter to the Seven Churches, 'To the angel of the church in Ephesus write...' (Rv 2:1).

Impartation-Paul's account of the Last Supper, 'For I received from the Lord what also I entrusted to you' (1 Cor 11:23); Ezekiel's vision by Chebar, 'The heavens were opened and I saw the visions of God' (Ez 1:1). The LORD would impart truth to the writers also through other Scripture writers (Mk 15:28), through extrabiblical, secular and even pagan writers (Acts 17:28; Jude 14f, cf. Enoch 1973: chap. 2), and through other living people (Gal 1:18).

Impression-Paul's word concerning marriage, 'But to the remaining speak I, not the Lord' (1 Cor 7:12). Even when Scripture is manifestly from the pen of man, as those psalms addressed from man to the LORD, it is the Word of God (Ps 104:1-4; cf. Heb 1:7). Indeed, Paul wrote of his very distinctive expression,'But I would have you know, brothers, concerning the gospel that was preached by me, that it is not according to man' (Gal 1:11). The enigma of God's Word expressed in men's words is a small taste of the mystery of predestination and free will, but the firmness of that Word is as if all had been written on tables of stone. 'For if the word spoken through angels was firm...how shall we escape when we disregard so great a salvation, which, taking beginning to be spoken through the Lord, by His hearers was confirmed unto us?' (Heb 2:2f). The writer of Hebrews took the testimony of the hearers of the Lord to be firm, to the point of dividing the heirs of salvation from the heirs of damnation. Such was the solidity of the NT Scriptures.

Scripture must be recognizable if the Church is to receive it.

As the NT writers were about their work, Peter referred to the writing as Scripture (2 Pt 3:16), so a NT canon should be expected, directed still by that same infallibly inspiring Holy Spirit. As the book of Revelation was delivered from the Father to the Son to an angel to a man to a Church which was to receive a sure blessing from the reading and hearing of the book (Rv 1:1-4), so all the books of the NT, as with the OT before it, are to be embraced as the Word of God, confirmed by canonization.

The Canon has been achieved through the Church, the Body of Christ, with its many members coordinated by one inspiring Spirit.

If we reject inspiration, we reject that one inspiring Spirit, amputate ourselves from the one eternal Body of Christ, and abjure our adoption by the Father, Who sent the Son, Who sent the Spirit, Who imparted the Holy Word.

Credit: Alberegno 1360
The Revelation (some of whose scenes are here depicted) was delivered from Father to Son to angel to man to Church (Rv 1:1-4).

1 'Among christians, oracles, in the plural, denotes the communications, revelations or messages delivered by God to prophets…We say, the oracles of God, divine oracles, meaning the Scriptures' (Webster 1821). The Greek NT word sometimes translated as oracle is logion (λ?γιον), a diminutive of logos (λ?γος), word. Logion means a small word, a brief utterance, presumably because oracles among the Greeks were generally brief (Thayer 1887).

5 Christ seems to have designated all three sections of the Tanach, or Hebrew Bible, in Luke 24:44, where He mentions the law of Moses, the prophets and the psalms. Psalms, as its chief book, may have referred to all of the Holy Writings. Elsewhere, Christ uses the term book of Psalms (Lk 20:42). 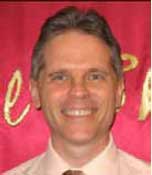 Erich D. Schwartz is a high school humanities teacher at Dayspring Christian Academy, Lancaster PA, where his courses include New Testament Greek, Biblical Hermeneutics and Worldviews. He has a BA in Ancient Languages and Music Composition from Wheaton College, IL. He serves as an elder at New Hope Bible Fellowship in Lancaster PA.