In Search of Joshua's Ai: 11th Season of Excavations at Khirbet el-Maqatir

We have just finished our first week of excavation at Khirbet el-Maqatir nine miles north of Jerusalem in Israel's West Bank. Dr. Bryant Wood and a team of 41 are staying at the Yad HaShmonah dig headquarters, while other friends have joined the group almost every day.

With seven squares open the first week, we are finding wonderful architecture and artifacts. Dr. Wood continues to look for additional understanding about the city gate of Joshua's Ai, but before he could make any such finds, his team uncovered a massive storage jar (we call it a pithos) buried in the ground with about 75% of it recoverable.

In addition, 12 coins have been found in his square. Since coinage did not begin until the sixth century BC, none of them related to Joshua's time. But we can't wait to clean them and find out under what ruler they were minted and when. Though never much interested in ancient coins—they are like modern history to him!—Dr. Wood is enjoying the fact that his square has more than everyone else combined (12 of 22 this week).

Next to him, Jim Luther, Steve Rudd and team uncovered—on the very first day—another lower socket stone from our city gate complex. Like the other two, it was also not in its original context but in secondary use. In addition, they have the extension of a wall previously identified in an adjacent square that seems to be part of the 15th-century fortress of Ai which Joshua captured. 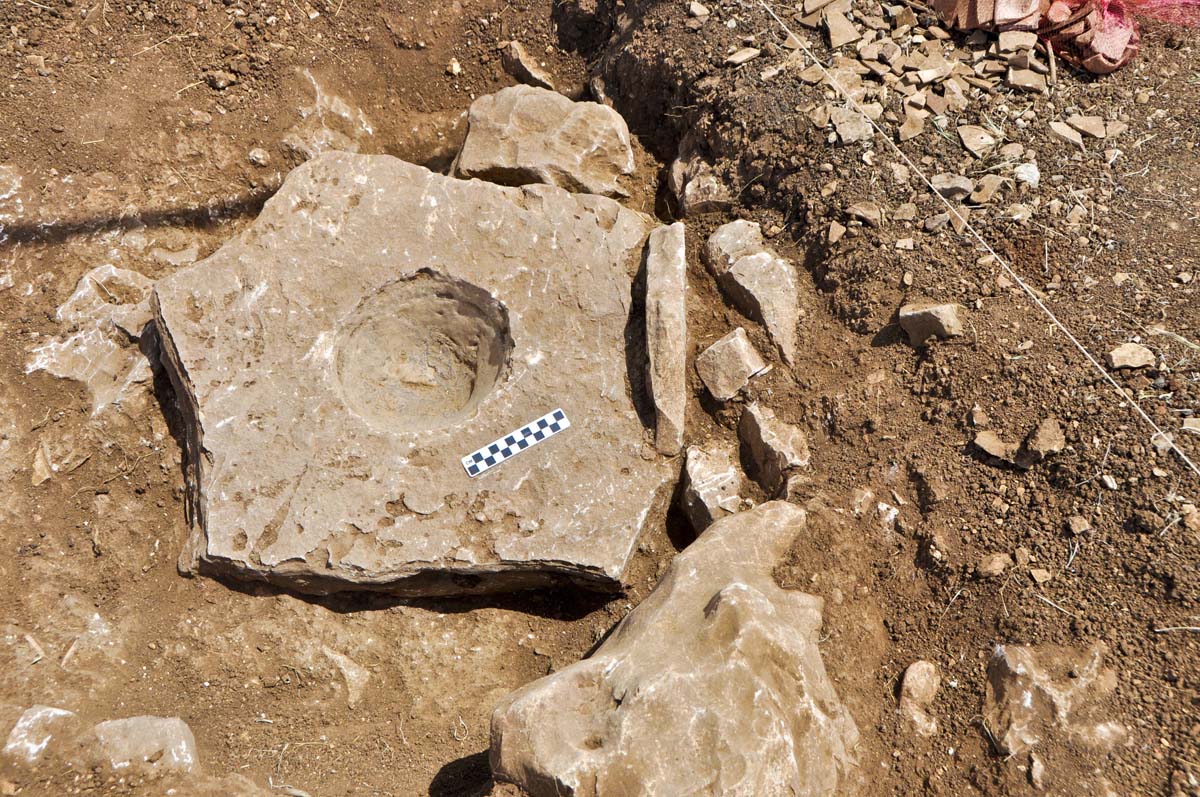 City of Ai gate socket stone in secondary use. 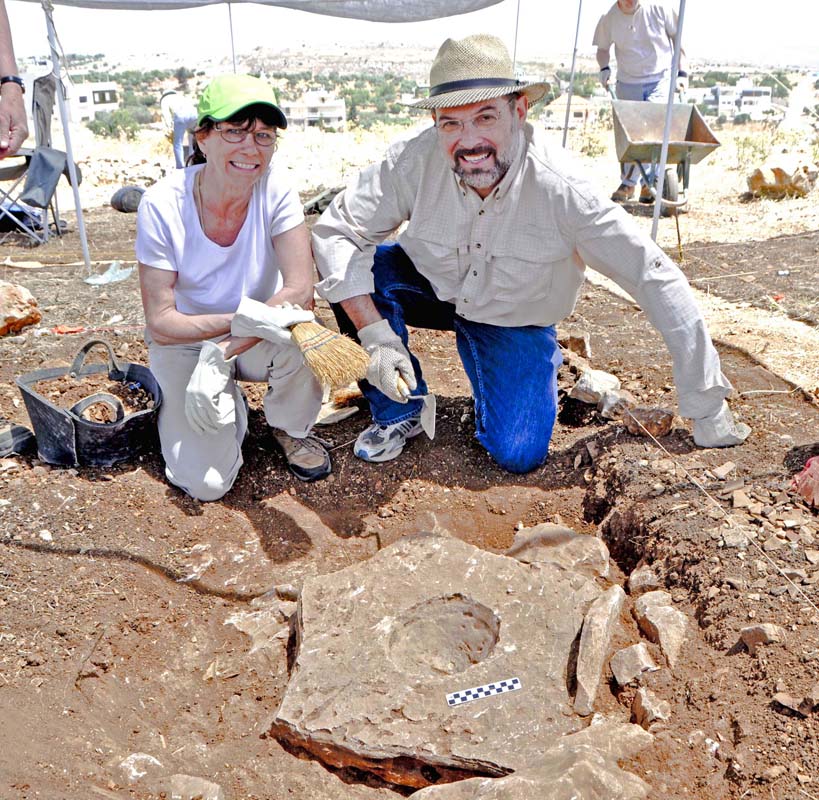 Nearby, Dr. Gene Merrill and Henry Smith's team discovered a large installation cut into bedrock and sealed closed with a square stone-carved lid! Dr. Merrill called this the most exciting day of excavation in his life. While the construction date of this structure is still unclear, opening the lid to see what is down inside is going to be very special! 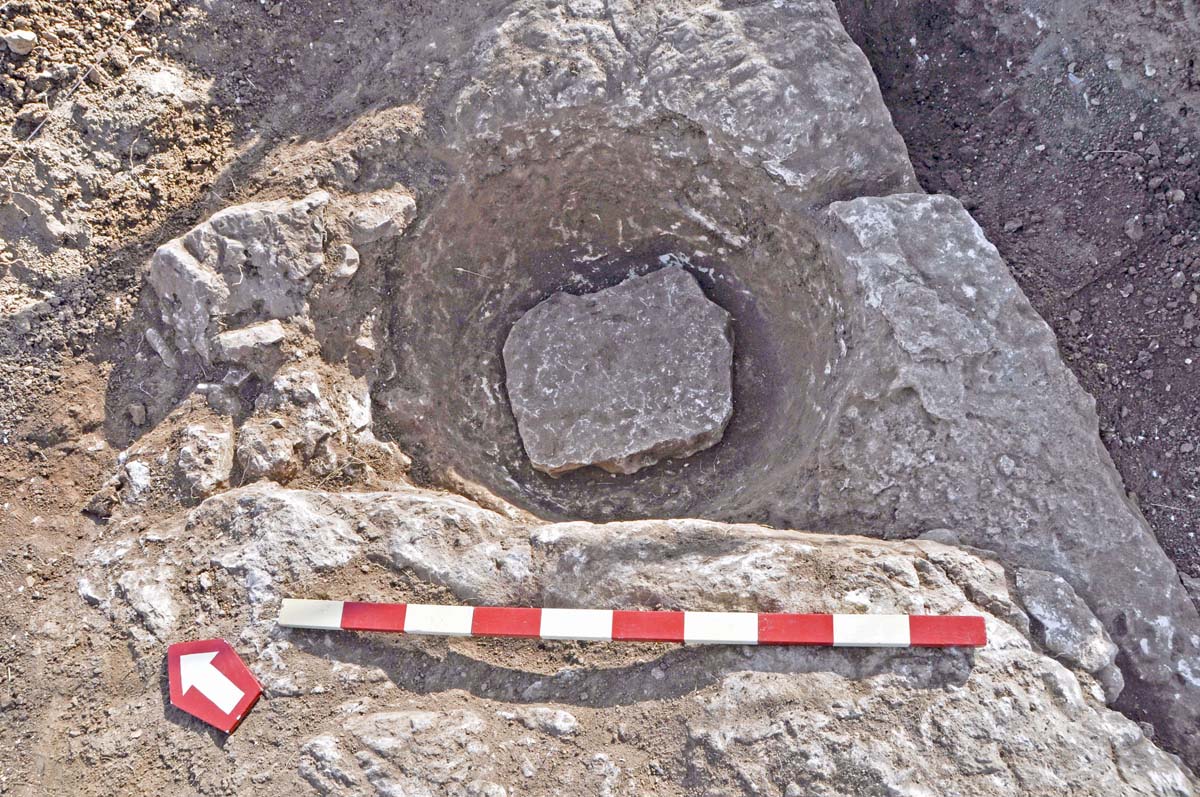 Speaking of opening the lid to a subterranean structure, Dr. Scott Stripling's crew cleaned out another new subterranean structure with a massive round covering stone that took all day to get out of the hole. Down inside was mostly dirt with some Roman pottery. Dr. Stripling's crew also continued to excavate the south wall of the "First-Century House" we have been digging for three seasons. 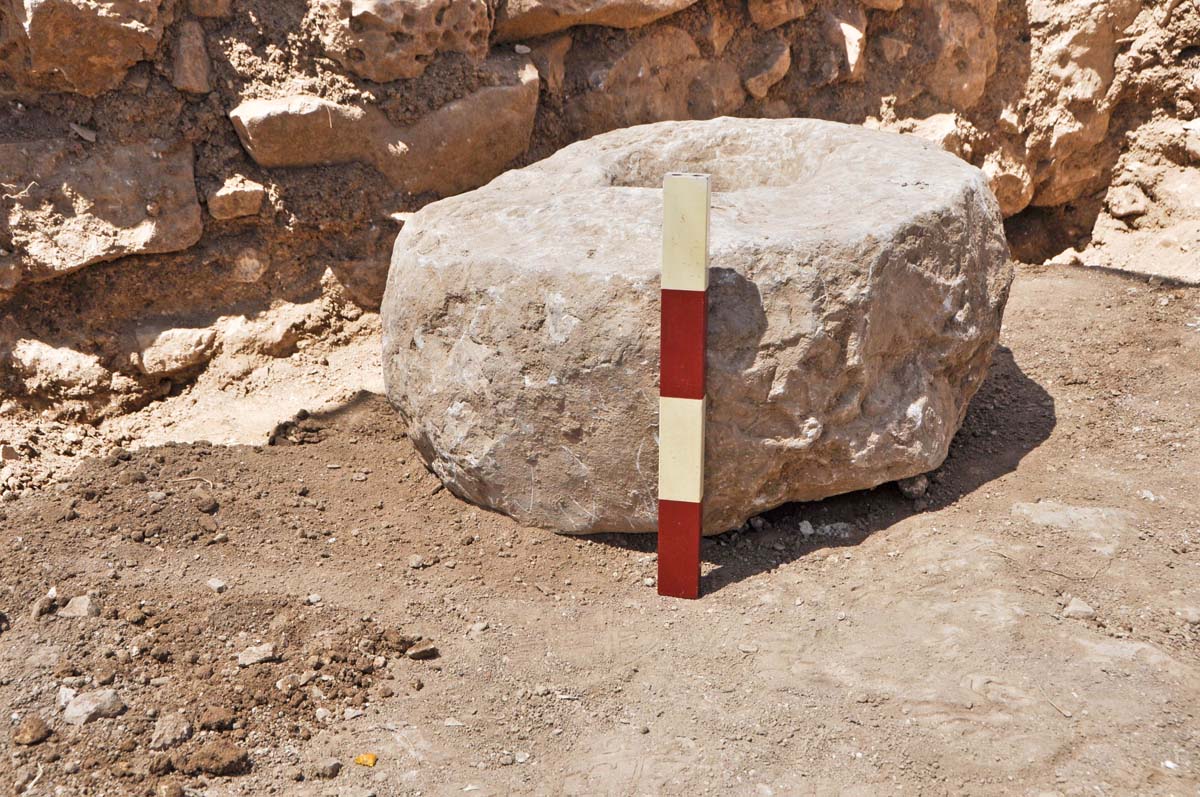 Massive covering stone above subterranean silo in the "First-Century House." 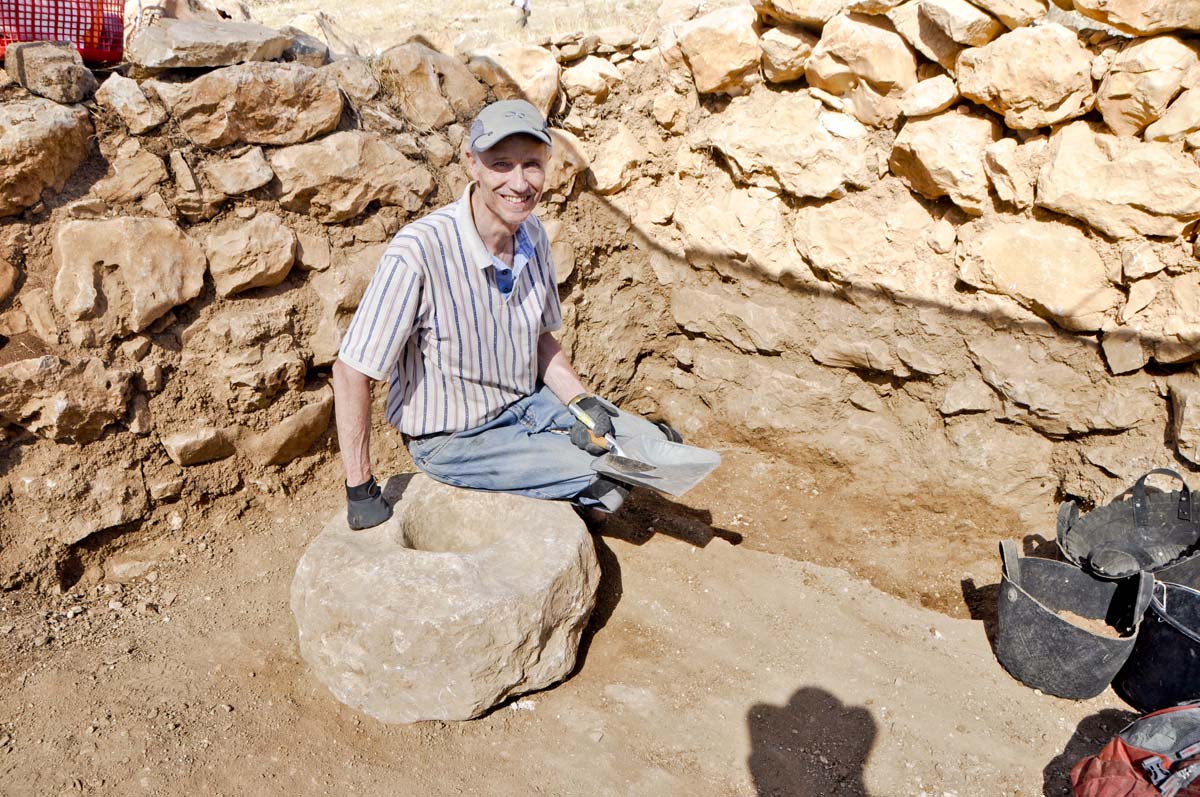 Massive covering stone and Bob, who dragged it out of the hole all by himself (not exactly!).

Dr. Brian Peterson and company are excavating two squares within the "First-Century House" and have continued to reveal lots of new features and artifacts there. He found a large, shallow storage silo cut into the bedrock, reaching floor level in three rooms of the house. Here they have found iron Roman nails, Roman glass, ritual stone vessels, and very rare iron tongs. Brian's team is also second in coin collection with five. 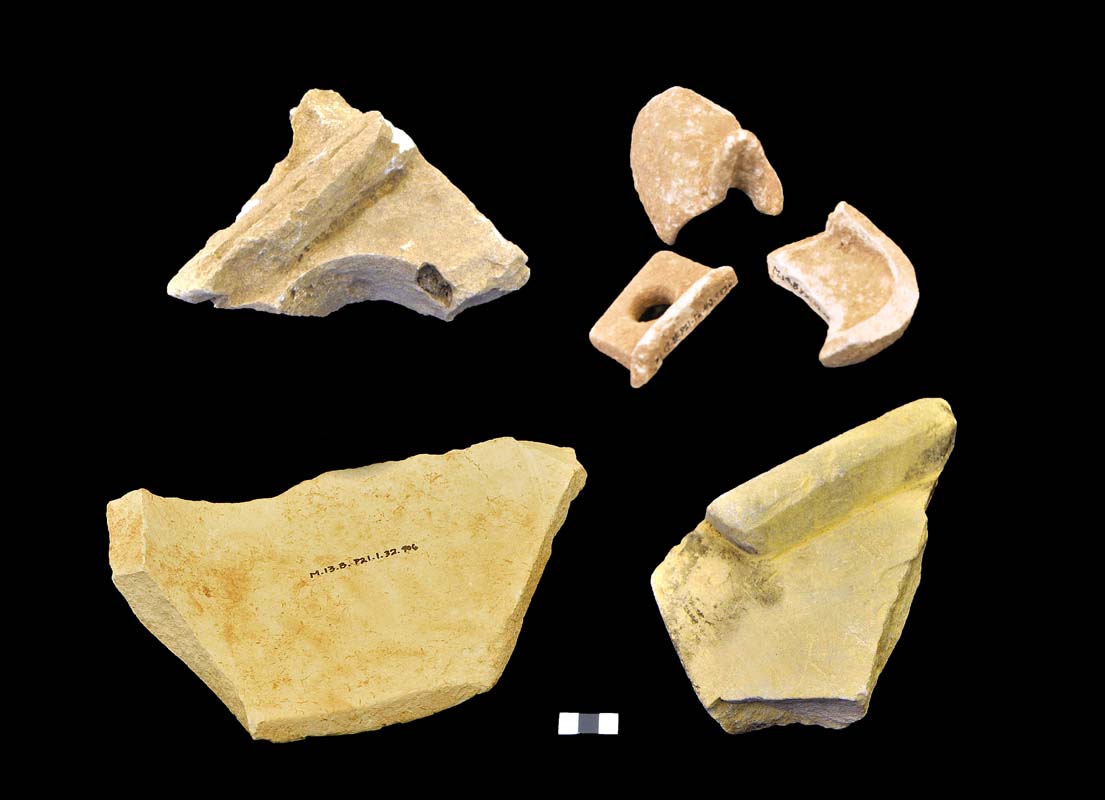 New Testament-period fragments of stoneware vessels from the "First-Century House."

Our youngest and newest square supervisor, Abigail Leavitt, a veteran Khirbet el-Maqatir excavator, is directing her first square. Her team members are excavating the continuation of a stone wall line inside the city Joshua captured. They are finding lots of pottery from the time of Joshua. They also have some flint scrapers and blades, as well as Roman nails and sandal tacks.

Don McNeeley and I lead the final square. We are excavating along the north wall of the Canaanite city Joshua defeated and destroyed. While the Bible doesn't speak directly to the fact, excavations suggest that, during the period of the Judges, the tribe of Benjamin settled on the site for a time (Jgs 3:15, 20:16; 1 Chr 12:22). Our team is excavating one of the houses the Benjaminites built after they themselves excavated in the destroyed wall of the Canaanite city. So far we have a very large grinding stone, and have the top spot in slingstones with seven—but who's counting?! 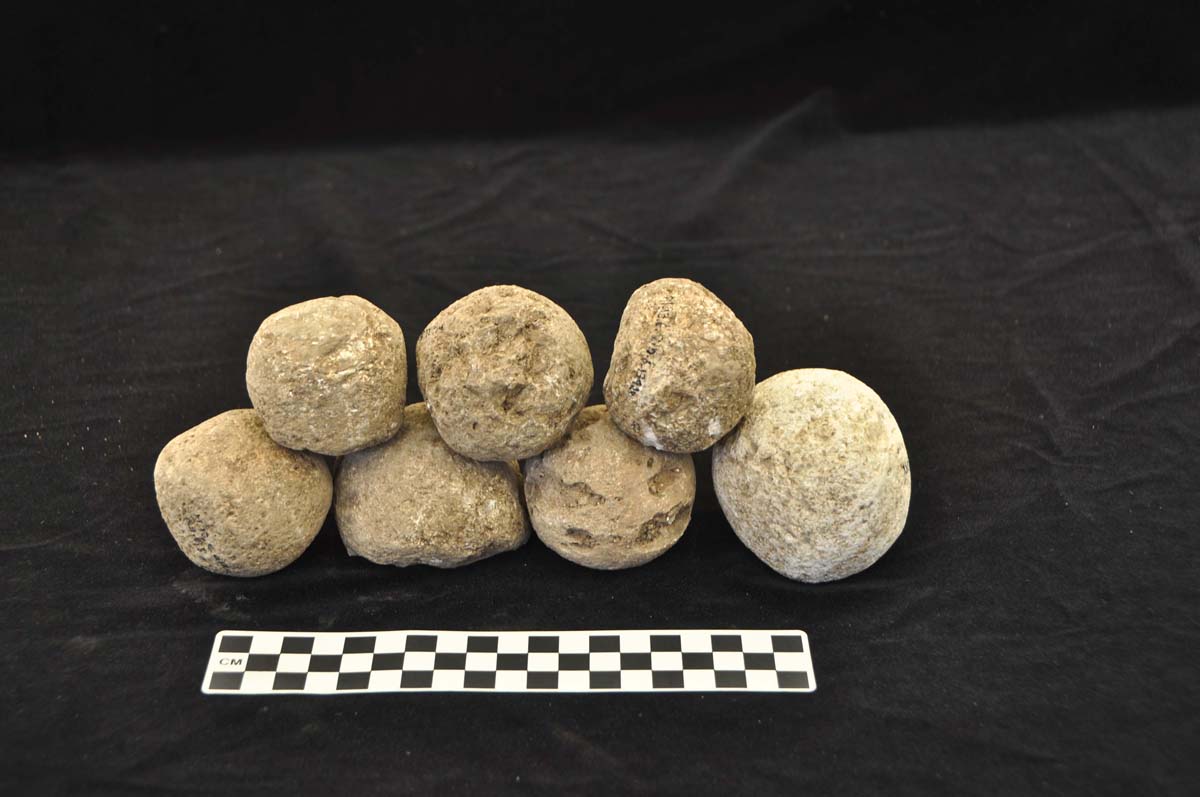 Seven slingstones from a Benjaminite house during the time of the Judges.

One week down and one more to go! This has possibly been our greatest first week of finds ever at Khirbet el-Maqatir. But there have been some sicknesses and injuries among our dig team, so please keep us all in your ongoing prayers. Thanks for standing with us. 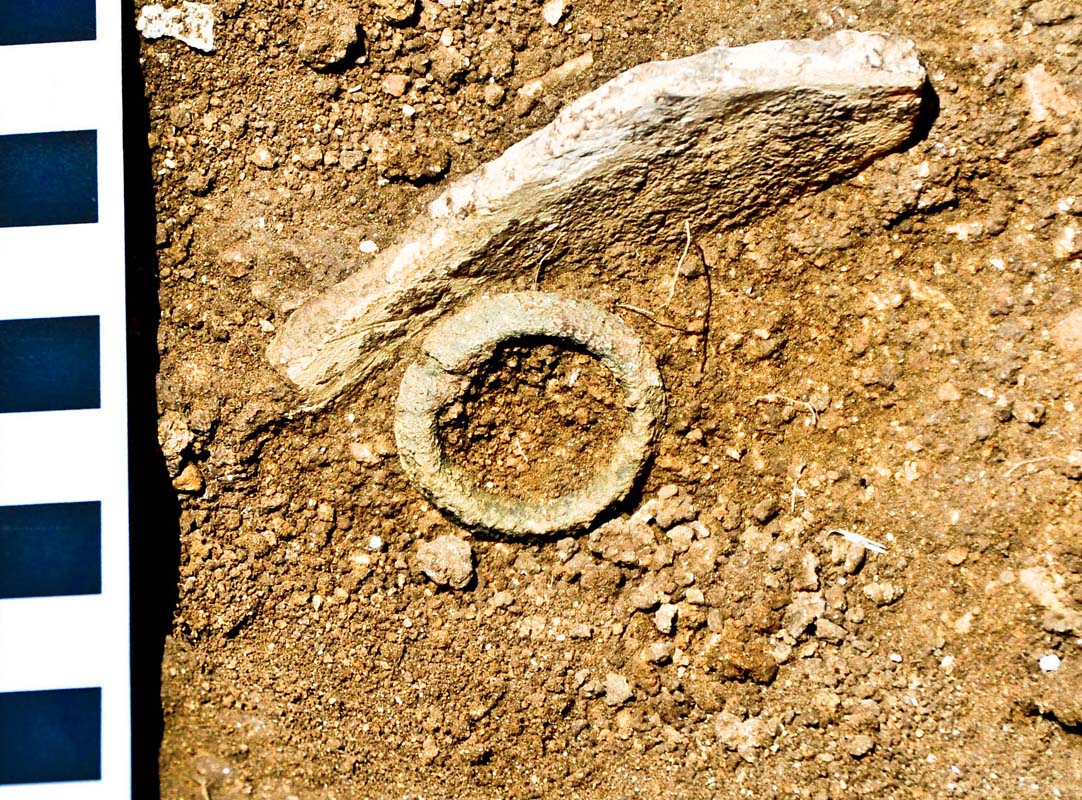 Lady-sized iron finger ring as it was found in Jim Luther's square, R-19.

See a slideshow of pictures from the 2013 Dig season at Khirbet el-Maqatir on the ABR Facebook page (you don't need a FB account to see the pictures).