The ABR Excavation at Khirbet el-Maqatir: Review of Past Work and Report on the 2009 Season

After a hiatus of nine years, ABR has resumed work at Kh. el-Maqatir, a promising candidate for Joshua's Ai (Joshua 7–8). The site is located approximately 9 mi. north of Jerusalem and 0.6 mi. west of et-Tell, the site most scholars identify as Joshua's Ai. There is a major problem with identifying et-Tell as Joshua's Ai, however, as the site was unoccupied at the time of the Israelite conquest of Canaan. ABR was founded 40 years ago to examine this problem, and fieldwork has been conducted both at Kh. Nisya (1979–2000; Livingston 2003) and Kh. el-Maqatir (1995–2000 [Wood 1999b, 1999c, 2000, 2008] and 2009) as part of the investigation. At Kh. el-Maqatir, evidence has been found for five major periods of occupation:

Due to the long time span between the first six seasons and the 2009 season, I shall briefly review the finds from the earlier seasons that relate to the ABR search for Joshua's Ai, and then give a short summary of the results of the 2009 season. After seven seasons of work, we can conclude that Kh. el-Maqatir corresponds very well to the Biblical requirements for Ai described in Joshua 7–8. Join ABR as we return to Israel in 2010 for our eighth excavation season!

These requirements can be divided into two categories: geographical and archaeological. 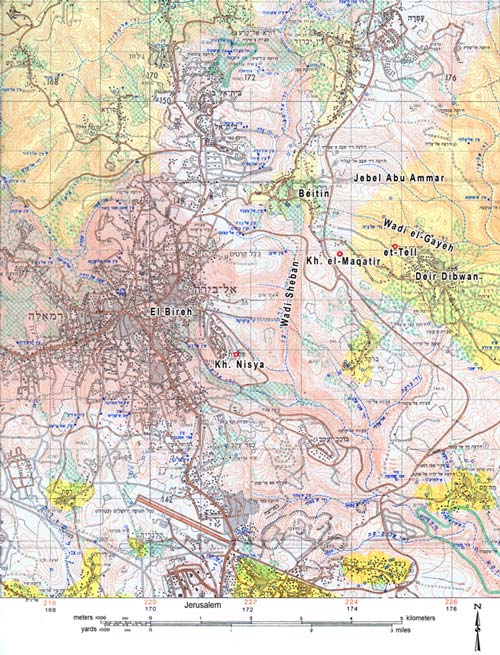 Region of Kh. el-Maqatir showing the locations of et-Tell, the site most scholars identify as Joshua's Ai; el-Bireh, the most likely candidate for Bethel; and Beitin, the only viable possibility for Beth Aven.

Ai Must Be a Strategically Significant Site (Jos 7:2)

Kh. el-Maqatir is located on the southern bank of the Wadi el-Gayeh, which was the border between the central area of the highlands, under the control of the city-state of Shechem (Wood 1997), and the territory of Jerusalem to the south. From Kh. el-Maqatir there is clear line-of-sight communication with Jerusalem. Based on its strategic location and archaeological findings there, Kh. el-Maqatir appears to have been a northern border fortress for the Jerusalem city-state at the time of the conquest. After the Israelites defeated Jericho (Jos 2–6), thereby gaining a foothold in the Promised Land (Cis-Jordan), Joshua sent spies to Ai in the highlands to the west (Jos 7:2). Ai clearly was important in Joshua's overall military strategy for conquering Cis-Jordan. After eliminating the "early-warning system" of Ai (Jos 7–8), the Israelites conducted a campaign against a coalition of southern city-states led by Jerusalem (Jos 10). Thus Kh. el-Maqatir is consistent with the biblical description of Ai as a militarily important site that needed to be eliminated prior to conducting a southern campaign.

Credit: Michael Luddeni
View from Kh. el-Maqatir to Jerusalem 9 mi. to the south. On the left is the Mount of Olives and on the right are hotels in Jerusalem's City Center. The geography of the region suggests that the fortress at Kh. el-Maqatir was the northern border fortress for the city-state of Jerusalem, which was the head of a coalition of southern city-states defeated by the Israelites (Jos 10).

When Joshua described the location of Ai to the spies, he said it was "near Beth Aven" (Jos 7:2). The Hebrew word used here, 'im, means "close to, beside." The most likely location for Beth Aven is Beitin (Wood 1999a), and Kh. el-Maqatir is just 1 mi. southeast of Beitin.

Joshua further told the spies that Ai was "to the east of Bethel." The best candidate for Bethel is el-Bireh (Livingston 1998), and Kh. el-Maqatir is east of el-Bireh.

In the list of defeated kings in Joshua 12, Ai is described as being "missad Bethel," meaning "in the vicinity of" Bethel. Kh. el-Maqatir is 2 mi. east of el-Bireh. Bethel was aligned with Ai, as the men of Bethel joined forces with the men of Ai in fighting the Israelites (Jos 8:17).

Joshua placed an ambush force (or forces) "between Bethel and Ai, to the west of Ai" (Jos 8:9, 8:12). This requirement is met by the Wadi Sheban between el-Bireh and Kh. el-Maqatir. It is a very deep valley, hidden from view from both Kh. el-Maqatir and el-Bireh.

When the Israelite army arrived at Ai, Joshua and his generals "set up camp north of Ai, with the valley between them and the city.…The soldiers took up their positions—with the main camp to the north of the city and the ambush to the west of it" (Jos 8:11, 8:13). Jebel Abu Ammar, 1 mi. north of Kh. el-Maqatir, is the highest hill in the region and would have been an excellent command post from which Joshua's generals could have viewed the entire battlefield.

Joshua did not remain with the main army, but rather took a small diversionary force and spent the night in the valley between the camp and Ai (Jos 8:13). This mimicked the small force that initially attacked Ai and was defeated (Jos 7:4–5). "When the king of Ai saw this, he and all the men of the city hurried out early in the morning to meet Israel in battle" (Jos 8:14). The valley north of Ai must have been a shallow valley in order for the king of Ai to observe Joshua and his men. The Wadi el-Gayeh between Kh. el-Maqatir and Jebel Abu Ammar is just such a valley. 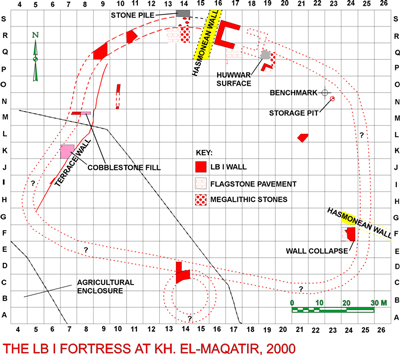 Since a gate figures prominently in the account of the capture of Ai (Jos 7:5, 8:29), it can be assumed that the site was fortified. Already in the first exploratory season in 1995, a large lower gate socket stone was discovered. Subsequent seasons revealed the west chamber of a two-chambered gate, as well as an additional lower gate socket stone and an upper gate socket stone (Wood 1999c: 28). Pottery found in conjunction with the gate dates to the LB I period (ca. 1500–1400 BC; Wood 2008: 231–36), the time of the Conquest. The east chamber of the gate has not survived, as the stones were robbed out by later occupants, probably during the Hasmonean period (167–37 BC) when another fortress was built over the east half of the LB I citadel. Excavations from 1996 to 2000 uncovered sections of the LB I fortress wall 12–13 ft. wide on the north, west, and south sides of the enclosure.

When Joshua arrived at Ai with "the whole army" (Jos 8:1, 8:3), he was "in front of" Ai on its north side (Jos 8:11). The "front" of the fortress would have been the side where the gate was placed. Therefore, an important archaeological requirement for any contender for Ai is that it has a gate on its north side. The gate at Kh. el-Maqatir is on the north side of the fortress.

When the spies came back from Ai, they reported to Joshua that "only a few people live there" (Jos 7:3), indicating that Ai was a small place. This is further quantified in Joshua 10:2 where it is recorded that "Gibeon…was larger than Ai." In the Middle Bronze Age period (ca. 1800–1500 BC), Gibeon was ca. 7 acres in size (Broshi and Gophna 1986: 74, 82). We can assume that it was about the same size in Joshua's day. The LB I fortress at Kh. el-Maqatir is much smaller than Gibeon as it occupies an area less than 3 acres.

After defeating the armies of Ai and Bethel "at a certain place overlooking the Arabah [wilderness]" (Jos 8:14), "the Israelites returned to [the fortress of] Ai and killed those who were in it" (Jos 8:24). They then plundered the fortress (Jos 8:27) and set it ablaze (Jos 8:28). Abundant evidence that the LB I fortress was destroyed by fire—such as ash, reheated pottery, burned stones, and calcined bedrock—has been found at various places on the site.

"So Joshua burned Ai and made it a permanent heap of ruins, a desolate place to this day" (Jos 8:28). Following the destruction of the LB I fortress, it was abandoned and left exposed to the elements, and later to scavengers and the farmer's plow. Much of the eastern half of the LB I fortress was robbed out by the later Hasmonean builders. The western half was similarly robbed out when the Byzantine church and monastery were constructed on the summit of the hill 220 yd. to the northwest. Subsequent to the Byzantine period, there has been additional looting of the site. The foundation of the west half of the gate and remnants of the fortress, however, have survived. These sparse remains are visible on the surface or can be found just below the surface. Despite the plundering over the centuries, there remains a "permanent heap of ruins" at Kh. el-Maqatir yet today.

Highlights of the 2009 Season

Excavations in the 2009 season focused on the fortification system and a building complex inside the gate.

Excavations in the gate passageway revealed apparent evidence of severe burning, evidence in the form of reddened and fragmented bedrock and burned and calcined building stones. On the west side, a 5-m length of the fortress wall was exposed and a 4-ft.-wide trench cut through it to provide a cross section of its construction. At this spot the wall is 12 ft. wide at its base and is preserved to a height of 4 ft. The excavation of several exploratory squares on the south and east sides of the fortress in an effort to locate the fortification wall in these areas proved unsuccessful.

Credit: Oral Collins
Cross section of the west fortress wall. The best-preserved portion of the wall yet found, it is 12 ft. wide at the base and is preserved to a height of 4 ft.

Building Complex inside the Gate

An infant jar burial was discovered between two walls in the northeast corner of the excavation square. Bones found in the vicinity proved to be those of an infant not more than six months old. The grave goods consisted of a storage jar with its mouth facing south, a small cooking pot, a chalice, and a dipper juglet. The pottery will be important for dating the fortress. In addition, the find supports another minor detail in the biblical account of the defeat of Ai. The summary of the victory states, "Twelve elephs [of] men and women fell that day—all the people of Ai" (Jos 8:25). The fact that an infant was buried at the fortress implies that women were living there. This discovery provides yet another point of agreement between the finds at Kh. el-Maqatir and the many details given in the biblical narrative concerning Ai. 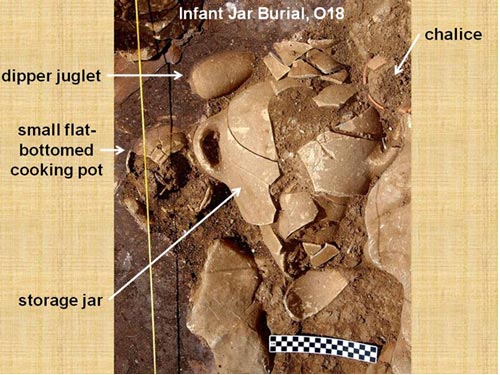