Whew!!! We finished the three weeks of excavations and even added an additional day. As was previously noted in our weekly reports, the dig season revealed many great features and artifacts that assist in understanding the society of the various occupational levels at Khirbet el-Maqatir. Everything from the walls revealed, the pottery reconstructed, and the objects photographed to even the color of the soil excavated provides clues to help reconstruct the biblical past. But, now it is time to branch out from Maqatir and get that bigger picture of the Bible that only comes from visiting the places we read about in Scripture. But where to start?

Dr. Scott Stripling laid out an aggressive six-day schedule of driving and visiting archaeological sites and more. What follows is a travelogue and some pictures of the tour.

Elah Valley (David and Goliath). One of the interesting aspects of touring with Scott is that you can always expect the unexpected. On the way to Elah Valley, we made a short detour and visited Tel el Ful (Saul's palace, also known as Gibeah of Saul). This is where Abigail Leavitt found a headless fertility figurine last year, so we hoped to find its head. Alas, we failed, but the visit did allow us to see the spectacular view Saul had of the surrounding Benjaminite territory from his palace (1 Sm 10:24-26). Leaving Tel el-Ful, we visited Beth Shemesh, which means "the house (or temple) of Shamash," a Canaanite sun god. This location also has an Egyptian Temple along with Middle Bronze and Iron Age walls. Of significance to the Bible student is that Beth Shemesh is where the two cows pulling a cart took the ark of the covenant when the Philistines decided to send the captured ark back to Israel because plagues were breaking out in their cities (1 Sm 6:1-20). We also were presented several pieces of mud brick used in the construction of various buildings manufactured in the same way as what the Israelites did in Egypt. 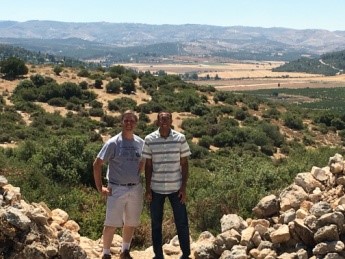 Arriving in the Elah Valley, we stopped and picked up some stones from the brook that David may have used in selecting his sling stones for his battle with Goliath, and then we went to Khirbet Qeiyafa, which is thought to be either a fortress from which Saul observed the battle between the Philistines (with Goliath) and the Israelites or a fortress David built to commemorate his victory over Goliath. Either way, Qeiyafa is set upon a hill that overlooks the Elah Valley, and this again brings the Scriptures to life. 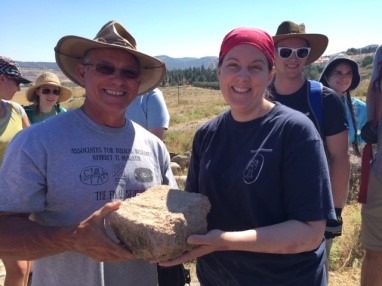 Flying over Shiloh, Shechem, Sebaste, and the Israel Museum. On Thursday, the tour group had the opportunity to spend some time at Shiloh. Joel Kramer, ABR Associate and a friend of the dig, was filming the Shiloh site for us using a drone. These photos and videos will be a great help in planning for the coming year as the ABR excavation team moves to Shiloh. Leaving Shiloh, the group went to Shechem and viewed Canaanite ruins and Joseph's tomb. Shechem has many links to the Scriptures, including Genesis, Deuteronomy, Joshua, and Judges. Each hallows Shechem. Its first mention is when Abram "built there an altar to the Lord, who had appeared to him" and had given that land to his descendants (Gn 12:7). After touring Shechem, the group toured the city of Sebaste, which is the Greek name for Augustus. This magnificent ancient city contains the palaces of Omri and Ahab. After leaving Sebaste, we headed to the Israel Museum for a special tour by Yoav Farhi, the numismatist for Khirbet el-Maqatir. He gave us a special tour of the current "Pharaoh in Canaan" and "Hadrian" exhibits. His informative and detailed discussions with the group filled in some aspects of the land of Israel. After this whirlwind tour day, the group returned to the hotel for a time of relaxation and prep for the next day's events.