To understand the winter 2013 excavation at Khirbet el-Maqatir, we have to go back to the last day of the summer 2013 dig.

By now, you may have heard that the 15th-century BC scarab that was found on our last day in May is listed on Christianity Today's website as the number one find in Biblical Archaeology in 2013 (off-site link).

However, that was not the only big find on the last day. The bottom of what we thought was a mikveh (ritual bath) opened up into an underground cavern that was joined on the south by a large cistern and on the north by a tunnel, carved in limestone, that appeared to be a hiding system from the First Jewish Revolt (AD 66–70); the tunnel opened up into another smaller cave. We were able to get drawings and to execute a probe trench that yielded four coins and abundant pottery that was indicative of the first century. We also observed two megalithic worked stones that could have been orthostats from the Late Bronze Age gate or part of an olive oil production facility. 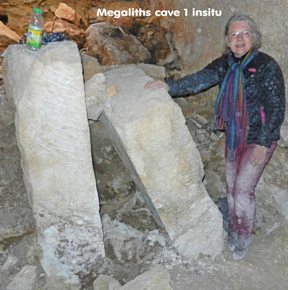 I knew right away that this would be our project for this winter. Now, fast forward to December 14–15.…The largest snowstorm in 120 years dumped almost a meter of snow on Israel. When we arrived on the site on December 18th, we were sinking up to our hips in white powder. What a contrast to the sweltering heat that we encounter in our summer digs! We literally spent the first two hours removing the snow from the entrance to our cavern. The Israeli archaeologists with whom we work closely and the Israeli Antiquities Authority told me that they had never seen anyone excavate in the snow. It was actually kind of fun. Fortunately, the sun was shining, and it continued to shine through our final dig day on December 31st. Inside the cavern, we discovered some pretty extensive damage by vandals; they had demolished a wall that we had recorded in the summer and dug in some areas. 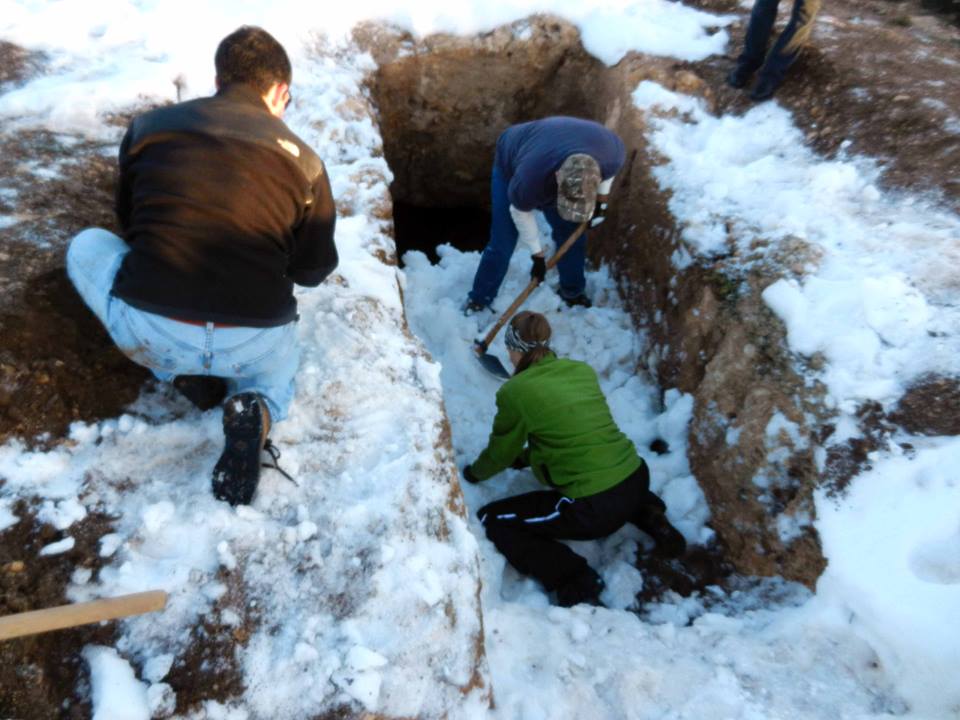 The task seemed daunting. CAV 1 (the main cavern) was full of small, medium, and large tumble that would be difficult to clear; CAV 2 (the cistern) had accumulated two meters of debris over the last two thousand years, and it would have to be removed by pulling a rope attached to a pail—one pail at a time; and CAV 3 (the hiding system and small cave) would be difficult to access due to the narrow tunnel. Abigail Leavitt, Steve Rudd, and Jacob Figueroa supervised the three areas while I oversaw the entire project.

Four days into the dig, we were able to determine that the megaliths in CAV 1 were in fact part of an olive oil production facility similar to the one at nearby Bet El and the one that ABR excavated twenty years ago at Khirbet Nisya. We revealed several of the drainage vats, but the complete excavation of this industrial complex will have to wait until next winter. In her book Stone and Dung, Oil and Spit, Jodi Magness documents the common practice of having olive presses adjacent to mikvaot. Not surprisingly, there is a mikveh (now excavated) on each side of CAV 1. This area also yielded twenty pieces of ritual stoneware; thirteen of them are mendable and may be from an ossuary or basin.

On the final dig day, we cleared the bottom of the cistern. In the lowest stratum, there were dozens of smashed storage jars of the type typical of the mid-first century—the decades between the ministry of Jesus and the destruction of Jerusalem in AD 70. Several interesting objects, such as a cosmetic applicator and grinding stones, were also recovered from CAV 2. The cistern had two well-preserved layers of plaster. Using a metal detector, we were able to locate two coins in this plaster. These coins will be very helpful in dating the cistern. A square opening that was 0.5 m x 0.5 m connected the cistern with the main cavern. This may have been created to allow additional hiding space during the Great Revolt. It would have also facilitated airflow after the village inhabitants blocked the entrance to the main cavern to avoid detection by the Roman army. A third possibility is that it was utilitarian, allowing water to be drawn from the top for the village needs and from the side for the needs of the olive oil production complex. 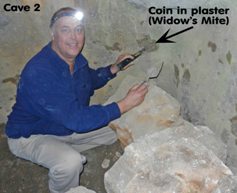 CAV 3 was completed in the first week. The 3.2-meter-long tunnel leading to a small cave is typical of those used in hiding systems from the Great Revolt. It may have also been used for secondary burial. Typical first century pottery was found, and the soil was chalky white above bedrock.

A total of 40 coins were recovered from CAV 1 and CAV 2 and the surface area above. These were turned over to our conservationist Orna Cohen for cleaning and restoration. From Orna, they will go to our numismatist Yoav Farhi for him to create our numismatic report. The pottery selected for publication is now with our late-period Ceramic Typologist, Peretz Reuven, who will write a detailed ceramic analysis before delivering selected pieces to the lab at Hebrew University to be digitally drawn. This is a new technology that is much less labor-intensive than what digs have normally done. 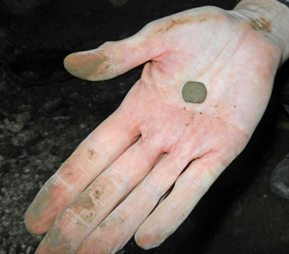 In summary, the 2013 winter excavation at Khirbet el-Maqatir was a great success, and we are all eager to get back in the field.

View the picture slideshow of the Winter 2013 Dig season on the ABR Facebook page (you don't need a FB account to see the pictures).