Home » Research » Search by Topics » People, Places, and Things in the New Testament » Archaeology and the Birth of Jesus

Archaeology and the Birth of Jesus

The Word became flesh and made His dwelling among us. We have seen His glory, the glory of the One and Only, who came from the Father, full of grace and truth.
(John 1:14)

Dear Friend in the Faith,

What love the Father has shown to us in sending His only Son to this earth to be our Savior and Redeemer! By accepting that precious gift we can be assured of eternal life. What joy to know that Jesus paid the price for our sins and our place in God’s family in heaven is forever secure. I trust that you and your family are rejoicing this Christmas season as we celebrate the birth of Jesus, the greatest and most significant event in human history.

The site of the traditional location of the birth of Jesus is marked by the Church of the Nativity in Bethlehem. Helena, the mother of Emperor Constantine, visited Jerusalem and Bethlehem in 325-326. Shortly thereafter, Constantine commissioned a basilica church to be erected at the location of Jesus’ birth. Beneath the church, built in 330-333, is a cave where it is believed Mary and Joseph stayed that first Christmas eve and where Jesus was born. The location has a high degree of likelihood since, as with the site of the crucifixion, early Christians surely would have known the location and would have passed that information down during the 300 years prior to Helena’s visit. Another reason in favor of authenticity is the fact that the traditional birthplace is a cave. The Bible tells us that there was no room for Mary and Joseph in the cataluma, or guest room, of the family home where they were staying. No doubt it was occupied by other guests who had arrived before them. Many times in antiquity, and yet even today, homes were built adjacent to, or over, caves where animals were kept.

The church is the oldest continuously-used place of worship in Christianity and is the oldest major church in the Holy Land. In 2012 it was named a UNESCO world heritage site and immediately placed on their endangered list due to its poor condition. Since then, church and Palestinian officials have been overseeing restoration of the roof, exterior facades, mosaics and doors. Work was completed in December 2018 and the church was removed from UNESCO’s list of endangered world heritage sites on July 2nd of this year. Many of the beautiful frescos and mosaics of Constantine’s original church have been restored and can be seen by visitors. 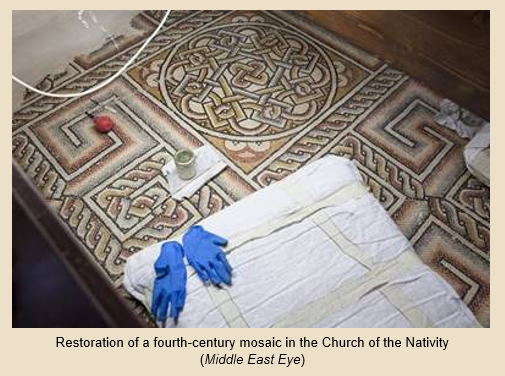 Forty-one days after Jesus’ birth, Mary and Joseph took Him to the Temple in Jerusalem six miles north of Bethlehem where He was consecrated to the Lord, and Mary offered a sacrifice for her purification (Luke 2:22–24; Leviticus 12:1–4). After these ritual obligations were met, the holy family returned to their home in Nazareth, some 90 miles to the north. Recent excavations have uncovered what is quite possibly the boyhood home of Jesus. Since 2006, the Nazareth Archaeological Project has been conducting excavations at the Sisters of Nazareth Convent where they have uncovered a house from the first century. It is a “courtyard house,” typical of the Early Roman period in Galilee. Artifacts found in the house indicate that it was occupied by a Jewish family. On either side of the house were tombs from the Early Roman period. The house was considered a holy place since a church was built over it in the Byzantine period, thus preserving and protecting it. It had a triple apse, polychrome mosaic floors and white marble fittings, rebuilt in the Crusader period. 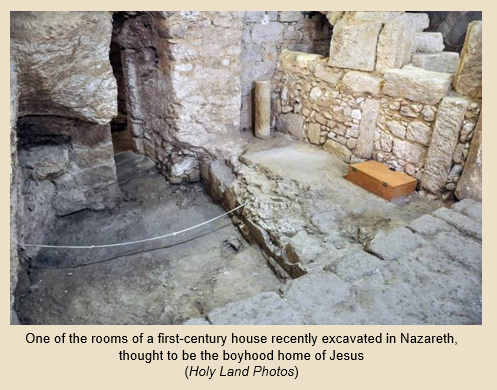 The excavator, Ken Dark, director of the Research Centre for Late Antiquity and Byzantine Studies at the University of Reading, England, believes there is strong evidence to identify this as the home of the holy family. In addition to the fact that it was venerated in antiquity, it exactly matches the description of a pilgrim who, in the late seventh century, visited a house identified as the house where Jesus was raised. Abbot Adomnán of the Iona Abbey in Scotland, described two large churches in the center of Nazareth. One is identifiable as the Church of the Annunciation, traditionally marking the place where the angel Gabriel appeared to Mary. The other stood nearby and was built over a spring and the remains of two tombs. Between the two tombs was a house said to be where Jesus was raised. The church was called the Church of the Nutrition, that is, “the church of the upbringing (of Christ),” the location of which was lost. The Church of the Annunciation is located just a stones’ throw southeast of the newly-excavated house and it appears that the Church of the Nutrition was built over the house. Dark ends his article on the excavation by cautiously stating, “Was this the house where Jesus grew up? It is impossible to say on archaeological grounds. On the other hand, there is no good archaeological reason why such an identification should be discounted. What we can say is that this building was probably where the Byzantine church builders believed Jesus had spent his childhood in Nazareth.” (Biblical Archaeology Review, March-April 2015, page 63)

Thank you so much for your faithful support during 2019. We look forward to your partnership in the coming year as we continue to defend, demonstrate and declare the truth of God’s word that “Christ Jesus came into the world to save sinners” (1 Timothy 1:15) and “whoever believes in Him shall not perish but have eternal life” (John 3:16).

Have a blessed and joyous Christmas,

Friends of ABR: If you would like to support Dr. Bryant Wood’s ministry with ABR please go to the ABR donation page and include a note with your gift: “For the ministry of Dr. Bryant Wood”.
www.biblearchaeology.org/supportabr