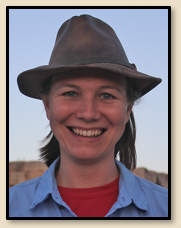 Mrs. Suzanne Lattimer serves as Administrative Director at Shiloh during the excavation season. Searching for the X on the ground has been a life-long passion and a driving goal. In search for her buried treasures, she attended Bryan College in Dayton, TN and received her B.A. in Bible and Piano Performance, with a minor in Koine Greek. She then went on to Trinity Evangelical Divinity School (TEDS) in Deerfield, Illinois and received her M.A. in Near Eastern Archaeology and Semitic Languages. Suzanne was a lowly peon in ABR's excavations at Khirbet el-Maqatir during the 1999 and 2000 seasons, fulfilling her parent’s request to try archaeology before paying for a degree. With degree in hand, she served as a square supervisor (affectionally known as a slave driver) from 2010 through 2013, and as a Field Archaeologist from 2014 through the inaugural season at Shiloh. She has also dug at Tel Dor, Israel in 2004, and in the Great Smoky Mountains with the National Park Service in 2001. She is on the Board of Directors for the Near East Archaeological Society and has served as its treasurer since 2011. In the off season, Suzanne holds down the home front for her husband serving in the Navy, homeschools their daughter, sings in the church choir, and tackles home projects that seem to never end. She has written articles for children in Bible and Spade, and has spoken to many children and adult Sunday School classes about the importance of archaeology.