Week One of the 2018 Excavations at Biblical Shiloh, operated and sponsored by the Associates for Biblical Research, is now in the books.

This year’s expedition to Shiloh consists of our largest group ever assembled. In all, over 140 volunteers and staff registered for our excavation. When we add day volunteers and students from IBEX (The Master’s University Bible Extension, including students from Dallas Seminary), the total number of people on site during the 2018 season will exceed two hundred! Participants include pastors, students, professors, business professionals, day volunteers, retirees... and anyone in between! A number of institutions are represented by groups and/or individuals, including:

The planning for each dig season at Shiloh begins more than a year before it actually commences. Twelve months a year our team, led by Dr. Scott Stripling, continuously works on all of the variegated dimensions of the dig: reports, fundraising, budgeting, logistics, public relations, advertising, hotel arrangements, tour itineraries, technological improvements, peer-review, article publication, and so on. It is a year-round process in which we continuously improve all aspects of our operation.

The reader may recall that last year we implemented wet-sifting protocols at Shiloh, utilizing the existing wet-sifting station previously built on the site. Shiloh is the first excavation outside of the Temple Mount Sifting Project in Jerusalem to utilize wet sifting. This process uses water to sift through excavated materials that have already been carefully removed from excavation squares and dry sifted. By using this process, we are able to discover critical objects that would otherwise have been lost forever in dump piles. While the existing station was useful, it was not conveniently located and was set up inefficiently.

One of our Shiloh Dig staff members, Steve Rudd, brilliantly designed a state-of-the-art wet-sifting facility, which we affectionately call the WASSI. Steve arrived three weeks in advance of the dig in order to supervise and construct the WASSI. Steve worked many, many hours to bring the project to fruition, staying in an apartment in Shiloh and making many sacrifices to be away from his family and church. He was able to complete the construction by the time we arrived at Shiloh to start digging on Monday, May 21st. If we had hired a company to design and build this station it would have cost tens of thousands of dollars, an expense we simply could not afford. Steve’s tireless work ethic and voluntary commitment to the Shiloh Dig and the ABR ministry is both admirable and humbling. We are most grateful for his unwavering commitment to the ABR ministry and excavations in the Holy Land. 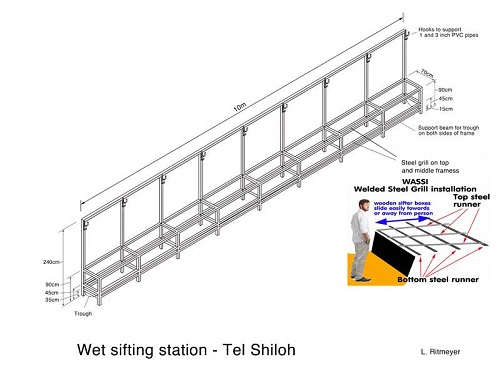 The WASSI, designed by Steve Rudd and drawn up by Leen Ritmeyer.

Beyond the WASSI, we are now entering our second season using iPads to enter our field data. After a learning curve last season, the supervisors have become much more comfortable with using the iPads, and we now cannot even imagine going back to using paper.

This year Jacob Moody, PhD candidate at Andrews University, is taking three-dimensional photographic images of our excavation squares. This new technology provides state-of-the-art, high-resolution 3D images of each square. These pictures will eliminate the need for top plans (hand drawings on graph paper), as they reveal details not seen by the naked eye. Frankly, the photos and software are incredible! 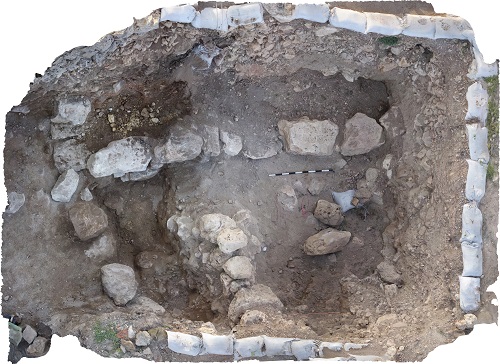 An example of the 3D imaging of square AF 27 (Credit: Jacob Moody).

Teams and Brief Notes on Finds

During Week 1, our teams opened or continued working in eleven squares:

Team One (AC28-29) – Supervisor: Dr. Mark Hassler. This area is located immediately outside the Bronze Age fortification wall in the northwest sector of the tell. The discoveries include coins, glass sherds, two serrated flint blades, bichrome ware, and a green sealing impression which possibly contains the image of a human face. More analysis will reveal whether this is the case.

Team Two (AF29) – Supervisors: Senior Archaeologist Gary Byers and IT Director Don McNeeley. The team cleaned up tumble and debris from the off-season. Two Iron Age loom weights made of clay were discovered. Part of the MB wall was falling apart, so the team conserved it to maintain its integrity. The bottom of a silo was exposed, and a set of possible pithoi were also found, along with large chunks of MB pottery. Further work in Week 2 will explore this further.

Team Three (AG 27-28) – Supervisor: Field Archaeologist Dr. Brian Peterson. Lee University's dig team of 16 students led by Dr. Brian Peterson was tasked with working on two squares, AG27 and 28. Their work on AG28 was completed by Thursday and they continue to work on AG27. After excavating about 0.5 meters from AG27, their team found what appears to be a destruction level and perhaps a floor line. More excavation this coming week will help determine this. A number of small finds were made including sling stones, a partial ballista, a bead, three pieces of a Roman-era glass bracelet, glass fragments, and a few coins. We hope to reveal the Middle Bronze Age glacis/rampart by mid-week.

Team Five (AE 29-30) – Supervisor: Assistant Dig Director Suzanne Lattimer. AE-29 is a new square. The MB fortification wall of the Amorite city runs through the entire square. There are two MB storage rooms that partially enter this square from AE-30. The team cleaned the top of the MB wall, the top course and the face. A couple of sling stones were also found. 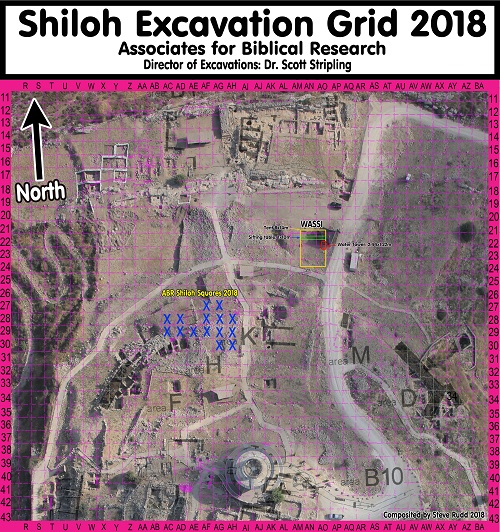 Team Six (AF 26-27) – Supervisor: Administrative Director Henry Smith. In 2017, we found a Middle Bronze wall outside the main Amorite city fortifications on the north. This wall has been exposed to three courses and extends into square AF 26. Remnants of a large storage vessel, copious amounts of animal bones, and early period pottery have also been discovered.

Team Seven (AH 29-30) – Supervisor: Tim Lopez. Tim’s team worked mainly in the north part of the square, clearing the MB storage wall which is probably connected to the large MB fortification wall surrounding the city. The team was able to find a possible Iron Age floor in this area, and they are now coming down to Middle Bronze strata, indicated by the pottery found there. A jar stopper and Roman glass base were also discovered.

Team Eight (Wet-Sifting Operation) – Supervisor: Greg Gulbrandsen. Each day, usually five of the sifting stations are manned and operational. At times seven or eight are manned and functioning, depending upon personnel available. The first week uncovered some valuable finds, including a carnelian biconical bead, a green bullae, some metal objects, and a variety of ancient ceramic and glass sherds. After the shofar blast at 1PM, we finalize any in-process wet-sifting and prepare for pottery washing operations. The pottery to be washed is brought down to the station and washed for reading the next day. The new station facilitates this very well. We have ample water for washing operations as well as drying rack space. In the morning, the pottery to be read is moved over to the reading tables, and wet-sifting operations start anew.

Objects – Object Registrar Abigail Leavitt reports the following discoveries: 22 coins, 5 sling stones, 2 beads and 1 seal, a total of 81 objects in all for Week 1. 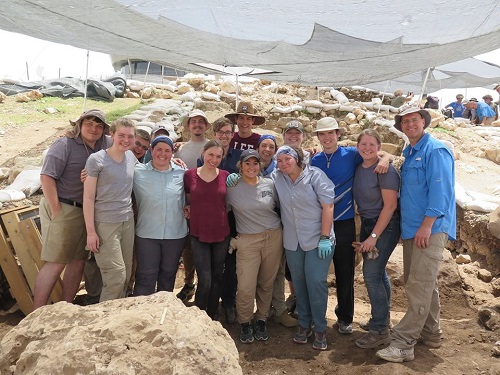