The Winter 2014 Dig at Khirbet el-Maqatir

For the fifth year, Dig Director Dr. Scott Stripling led a team of diggers to Israel to continue excavations at Khirbet el-Maqatir.

The story of the winter 2014 excavation at Khirbet el-Maqatir actually begins on the final day of the summer 2013 dig season. Around noon we found a very important scarab, which would later be named the top find in Israel in 2013 by Christianity Today. A short time later, while excavating what we thought was a mikveh, we discovered a large cavern that connected to a large cistern and a hiding tunnel and cave. We named these areas CAV 1, CAV 2, and CAV 3. We stayed three extra hours to execute a probe trench and take measurements. Eventually, we determined that all three areas were from the first century and that the entire interconnected area was used as a hiding system in the First Jewish Revolt against Rome (AD 66–70) and possibly in the Second Jewish Revolt against Rome (AD 132–136).

Last winter we completely excavated the cistern. Using pottery, coins found in the plaster, and other finds, we determined that it was built in the first century BC and was used until the end of the First Revolt. CAV 3 (the hiding tunnel and cave) was also completely excavated. It was likely created just before the First Revolt. The large cavern (CAV 1) was partially excavated, and we were able to determine that it was an olive oil production center. Carbon dating matched the ceramic and numismatic analyses, firmly dating the cavern's final usage to the mid-first century AD. 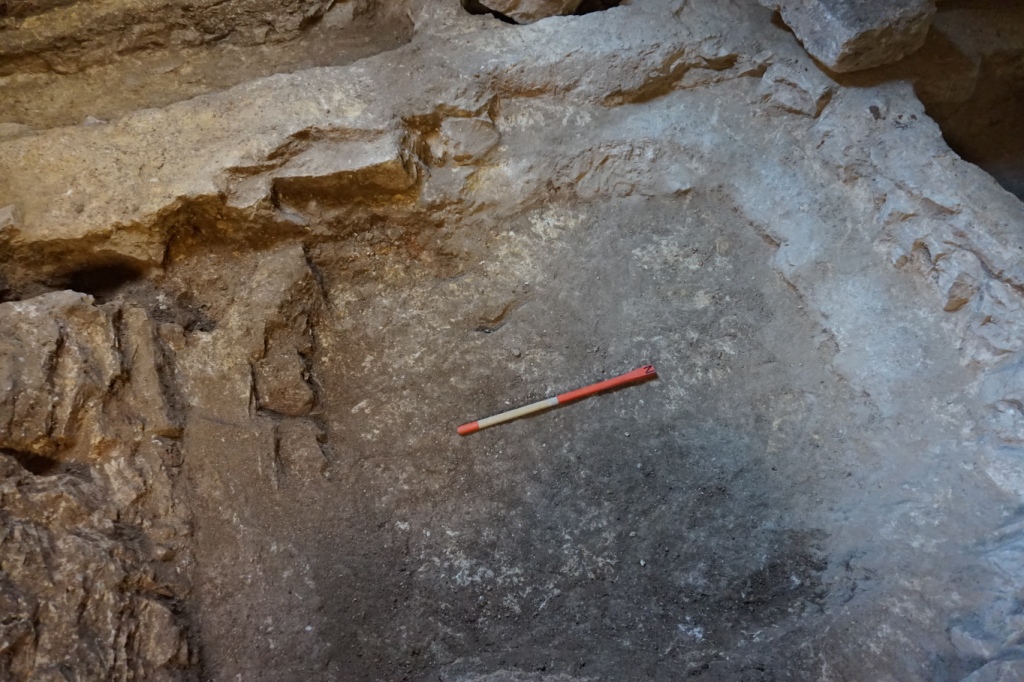 Vat for collecting olive oil. The blackened area is a result of heavy burning, perhaps from the combustion of the olive press beam.

We returned this winter with the goal of completing the excavation of CAV 1. The biggest challenge was that it was full of large tumble that had to be carried out using the ancient staircase, which consists of 15 steps. Since there was a large hole connecting CAV 1 with the cistern (CAV 2), we decided to dump our stones and dirt in it. After the first week, we had completely filled it, so we had to use a sledge hammer to bust up the large tumble. The rest we carried out one stone and one goofa (rubber bucket) at a time. Thanks to the amazing work ethic of the team, we finished the excavation on the final day. Fifty-two large architectural stones were saved, along with dozens of pieces of ritual stoneware, 10 coins (50 were found last winter), dozens of small objects, and a hoard of pottery. Two of the stones were megaliths from a screw olive press, and six were massive weights for the press. The grinding basin and grinding stone were apparently robbed out in antiquity. Based on the early ceramic analysis, there are over 200 different large storage jar fragments; this makes perfect sense for an olive oil center. At the lower strata, there is almost no utilitarian ware, only industrial. In the upper strata, there is a mixture of storage jars and household wares, indicating that the cave was turned into a hiding system during the First Revolt. There were three coins from the Second Revolt period, but no pottery.

On a rest day we visited the nearby site of Hizme, where a stoneware production facility was excavated about a decade ago. We found many pieces of broken stoneware still lying around the massive limestone cave. We will analyze the stoneware from our site to determine if it came from this facility. 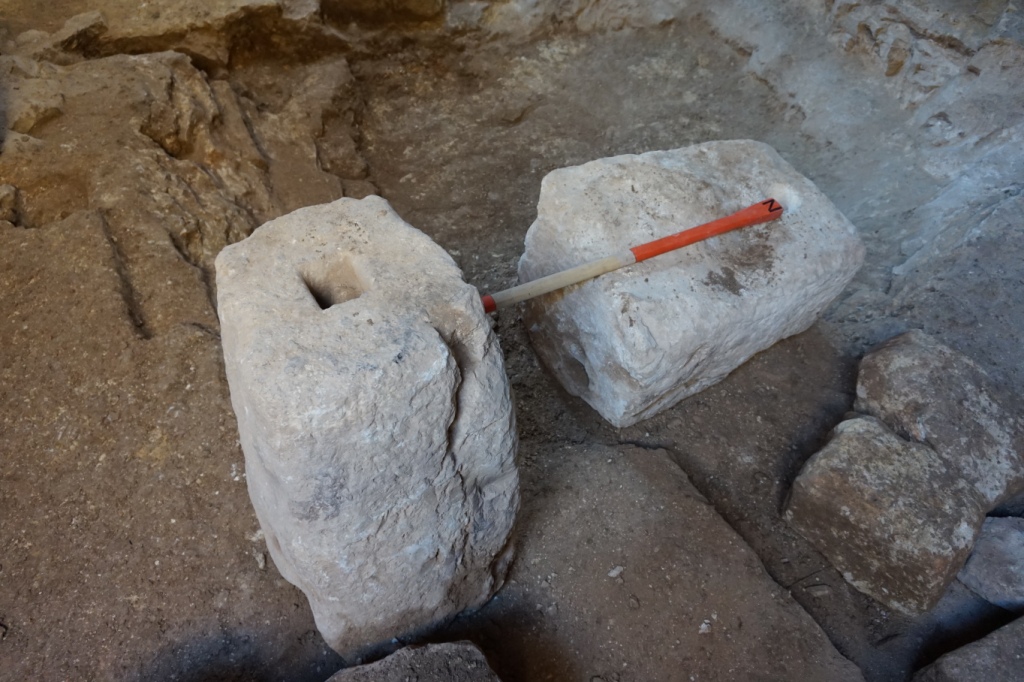 Two of the four massive olive press weights found in the cave. They are in an excellent state of preservation.

In summary, it appears that in the mid-first century BC (Late Hellenistic period), a small but strongly fortified city was built by the Hasmoneans on top of the ruins of the Late Bronze Age fortress of Ai and the Iron Age I (Judges period) village of Ephron. I have tentatively identified this small city as the Ephraim of John 11:53–54. See my recent Bible and Spade article HERE (PDF; opens in new window). As with other Second Temple-era settlements, the inhabitants were obsessed with maintaining ritual purity; this is clear from the material culture that we have excavated. Among other things, they made their living by producing olive oil in the cavern that we just excavated. Interestingly, we found a mikveh on the north and a mikveh on the south of CAV 1, which perhaps indicates that the inhabitants wanted to maintain ritual purity while working on the oil production. Rather than surrendering to the Romans in AD 69, they chose to fight. Like the defenders of the Alamo, they were annihilated by a much larger and better-equipped army. To better understand the archaeology of the Great Revolt, see my DVD on this topic at the ABR bookstore.

Slowly, Khirbet el-Maqatir is giving up her secrets. This summer we plan to excavate in the Late Bronze Age fortress, the Iron I village, and the Second Temple city. Would you like to come help us dig the Bible? The excavation is completely funded by volunteers like you. If you are unable to join us, your prayers and your tax-deductible donation are much needed and greatly appreciated.