Bethlehem' Seal Uncovered in the City of David 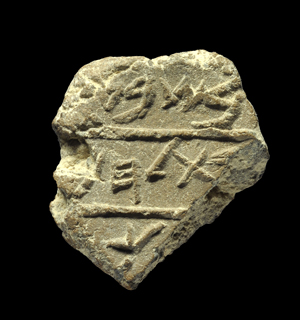 While sifting soil from archaeological excavations the Israel Antiquities Authority is conducting in the City of David, in the 'Walls around Jerusalem National Park', a bulla was discovered bearing the name of the city of Bethlehem, written in ancient Hebrew script.

Three lines of ancient Hebrew script appear on the bulla:

According to Eli Shukron, director of the excavation on behalf of the Israel Antiquities Authority, 'it seems that in the seventh year of the reign of a king (it is unclear if the king referred to here is Hezekiah, Manasseh or Josiah), a shipment was dispatched from Bethlehem to the king in Jerusalem. The bulla we found belongs to the group of 'fiscal' bullae - administrative bullae used to seal tax shipments remitted to the taxation system of the Kingdom of Judah in the late eighth and seventh centuries BCE. The tax could have been paid in the form of silver or agricultural produce such as wine or wheat'. Shukron emphasizes,' this is the first time the name Bethlehem appears outside the Bible, in an inscription from the First Temple period, which proves that Bethlehem was indeed a city in the Kingdom of Judah, and possibly also in earlier periods'.