Home » Founder's Corner » Jesus Christ on The Inerrancy of Scripture

Jesus Christ on The Inerrancy of Scripture

Negative Aspects (an argument from silence-but a loud silence!)

Christ's Use of Scripture

As L. Gaussen has asserted,

We are not afraid to say it: when we hear the Son of God quote the Scriptures, everything is said, in our view, on their divine inspiration-we need no further testimony. All the declarations of the Bible are, no doubt, equally divine; but this example of the Savior of the world has settled the question for us at once. This proof requires neither long nor learned researches; it is grasped by the hand of a child as powerfully as by that of a doctor. Should any doubt, then, assail your soul let it behold Him in the presence of the Scriptures! (1894: 93).

1. He knew the Scriptures thoroughly, even to words and verb tenses. He obviously had either memorized vast portions or knew it instinctively: John 7:15.1

2. He believed every word of Scripture. All the prophecies concerning Himself were fulfilled,2 and He believed beforehand they would be.3

3. He believed the OT was historical fact. This is very clear, even though from the Creation (cf. Gn 2:24 and Mt 19:4-5) onward, much of what He believed has long been under fire by critics, as being mere fiction. Here are some examples of historical facts: 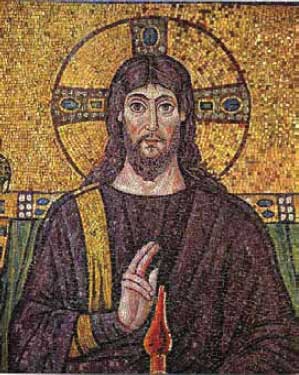 A Sixth Century mosaic of Jesus at the Church San Apollinare Nuovo in Ravenna, Italy. Jesus knew the Old Testament Scriptures down to individual words and even verb tenses. He memorized it. He believed in the historical truth of the passages from the Old Testament that modern day critics openly deny…including the early chapters of Genesis and the books of Jonah and Daniel. Jesus also believed that the books of the Old Testament were written by the men whose names they bear: Isaiah, Jonah, Daniel…and that Moses was the author of the Pentateuch. Those who claim that Moses did not write the Pentateuch are openly contradicting what Jesus believed. Critics and their skepticism stand against Jesus Christ and what He believed and taught about the Scriptures.

4. He believed the books were written by the men whose names they bear:

7. He actually quoted it in overthrowing Satan! The OT Scriptures were the arbiter in every dispute: Matthew 4; Luke 16:29, 31.

12. He not only was not jealous of the attention men paid to the Bible (denounced as 'bibliolatry' by some), He reviled them for their ignorance of it: Matthew 22:29; Mark 12:24.

13. Nor did Jesus worship Scripture. He honored it-even though written by men.

The above leaves no room but to conclude that our Lord Jesus Christ considered the canon of Scripture as God's Word, written by the hand of men.

Although some religious leaders profess to accept Scripture as 'God's Word,' their low view of 'inspiration' belies the fact. They believe and teach that Scripture is, to a very significant degree, man's word. Many of their statements are in essential disagreement with those of Jesus Christ. From the evidence of their books, we conclude that some Christian leaders are opposite to Christ in His regard for the authority, the inspiration, and the inerrancy of Scripture.

And now, the most important point. 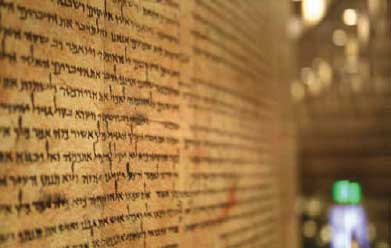 Scroll of Isaiah from Qumran on display at the Israel Museum in Jerusalem. Jesus stood up in the synagogue at Nazareth and read from the scroll of Isaiah, saying: 'The Spirit of the Lord is on me, because he has anointed me to preach good news to the poor. He has sent me to proclaim freedom for the prisoners and recovery of sight for the blind, to release the oppressed, to proclaim the year of the Lord's favor,' and then declared, 'Today this Scripture is fulfilled in your hearing' (Lk 4:18-19; 21b). Clearly, Jesus believed even the scroll copy He was reading from was the inspired and authoritative Word of God.

Jesus Christ Was Subject to Scripture

Jesus obeyed the Word of God, not man. He was subject to it. If some leaders' views of inspiration were true, Jesus was subject to an errant, rather casually thrown-together 'Word of Man.' Jesus would have been subject, then, to the will of man, not the will of God.

He Himself IS the Word of God. All the words from His lips were the Word of God (Jn 3:34). If He had desired, He could have written a new set of rules and they would have been the Word of God. But, He did not. He followed without question the Bible already penned by men. This is the sensible thing for every believer to do. May all who read this adopt Jesus' attitude and become subject BOTH to Him as Living Word (living Torah) AND to the Bible as the infallible, written Word of God.

(This paper is an excerpt from Dr. Livingston's MA thesis, A Critique of Dewey Beegle's 'Inspiration of Scripture.')

1. Jesus did not need to verify every passage in the Canon, or else we would find the whole OT requoted in the NT, which is unnecessary. He verified enough of it to assure us of complete approval of it all, including passages from all but a few books. Yet those also were in His canon. He did not refute any of them.

4. The Pentateuch is but one book in five parts. Meredith Kline's Treaty of the Great King has demonstrated convincingly that it was written by one person as a unity. Therefore, Christ's reference to any part of it as written by Moses infers He believed it was all written by Moses.

Dr. David Livingston is founder and former director of the Associates for Biblical Research. Involved in various Christian ministries for over 50 years, he currently serves as a member of ABR's Board of Directors and writes articles defending the historical reliability and inerrancy of Scripture. He and his wife Esther reside in Lititz, PA.