Home » New Testament Era » The Christmas Story: How Well Do You Know It? Part One

John the Baptist: the First Believer in Christ to be Martyred

John, a relative of Jesus (Lk 1:36), prepared the way for the ministry of Jesus (Mt 3:1-3) and proclaimed Him the Christ, the Anointed One, the Messiah and Savior who would take away the sin of the world (Jn 1:29-31). The tetrarch, or governor, of Galilee and Perea in Transjordan at the time was Herod Antipas, son of Herod the Great.1 For political reasons Herod Antipas married Phasaelis, daughter of the Nabatean king Aretas IV.2 While He was visiting his half-brother Herod Philip I.3 Herodias, Herod-Philip's wife, became interested in Herod Antipas and subsequently divorced Herod Philip. Herod Antipas then divorced Phasaelis in order to marry Herodias. John condemned this union, as it was considered unlawful (Mt 14:4; Mk 6:18; Lv 20:21). At Herodias' urging, Herod Antipas had John bound and placed in prison. Although the place of imprisonment is not given in the New Testament, Josephus states that it was in the Herodian palace Machaerus in Perea (Antiquities 18.5.2).

Herodias nursed a grudge against John and wanted to kill him. But she was not able to, because Herod feared John and protected him, knowing him to be a righteous and holy man. When Herod heard John, he was greatly puzzled; yet he liked to listen to him. Finally the opportune time came. On his birthday Herod gave a banquet for his high officials and military commanders and the leading men of Galilee. When the daughter of Herodias came in and danced, she pleased Herod and his dinner guests. The king said to the girl, 'Ask me for anything you want, and I'll give it to you.' And he promised her with an oath, 'Whatever you ask, I will give you, up to half my kingdom.'

She went out and said to her mother, 'What shall I ask for?' 'The head of John the Baptist,' she answered. At once the girl hurried in to the king with the request: 'I want you to give me right now the head of John the Baptist on a platter.' The king was greatly distressed, but because of his oaths and his dinner guests, he did not want to refuse her. So he immediately sent an executioner with orders to bring John's head. The man went, beheaded John in the prison, and brought back his head on a platter. He presented it to the girl and she gave it to her mother.

Josephus tells us that the unnamed daughter of Herodias was Salome, Herodias' daughter by her first husband Herod Phillip I (Antiquities 18.5.4), granddaughter of Herod the Great and half-niece of Herod Antipas. History and archaeology tell us much about the setting and people involved in the martyrdom of John the Baptist.

Herod Antipas ruled for about 40 years, from 1 BC4 until AD 39. From 1 BC until AD 6 he ruled his territories from the fortress-palace built by Herod the Great at Machaerus. After AD 6, he moved to Galilee where he refounded and fortified the city of Sepphoris, where extensive excavations have been conducted since 1985. Between AD 17 and 20 he built a new city on the western shore of the Sea of Galilee and named it Tiberias (Jn 6:23) in honor of the emperor. He constructed a lavishly decorated palace there and the city became the major seat of power in Galilee. Although Herod Antipas' palace has not been found, many other structures from the Roman and Byzantine periods have been excavated, including a city gate from the time of the founding of the city. Just as Herod Antipas was curious about John and his message, he was equally curious about Jesus (Lk 9:7-8). He exclaimed, 'I beheaded John. Who, then, is this I hear about?' And he tried to see Him (Lk 9:9). In spite of his curiosity, Herod Antipas had evil intentions toward Jesus. Even the Pharisees warned Jesus that Herod Antipas wanted to kill Him (Lk 13:31). Jesus' reply was,

Go tell that fox, 'I will drive out demons and heal people today and tomorrow, and on the third day I will reach my goal. In any case, I must keep going today and tomorrow and the next day-for surely no prophet can die outside Jerusalem!' (Lk 13:32-33).

When Jesus was on trial in AD 33, Herod Antipas finally had the opportunity to meet Him.

When he [Pilate] learned that Jesus was under Herod's jurisdiction, he sent him to Herod, who was also in Jerusalem at that time. When Herod saw Jesus, he was greatly pleased, because for a long time he had been wanting to see him. From what he had heard about him, he hoped to see him perform some miracle. He plied him with many questions, but Jesus gave him no answer. The chief priests and the teachers of the law were standing there, vehemently accusing him. Then Herod and his soldiers ridiculed and mocked him. Dressing him in an elegant robe, they sent him back to Pilate. That day Herod and Pilate became friends-before this they had been enemies.

Six years later Herod Antipas was accused of sedition and banished to the west.

Sometime after her encounter with John the Baptist, Salome married her father's half-brother, and therefore her half-uncle, Philip II,5 tetrarch of Iturea and Trachonitis, territories east and north of the Sea of Galilee. He enlarged the city of Paneas at the foot of Mt. Hermon and renamed it Caesarea in honor of the Roman emperor Tiberius. Since there was already a city named Caesarea on the Mediterranean, the new city was called Caesarea Philippi, 'Philip's Caesarea' (Mt 16:13 = Mk 8:27). Philip II died childless in AD 33-34. Since John was martyred ca. AD 31, Salome was married to Phillip II for only a few years.

Following the death of Philip II, Salome married Aristobulus,6 a great-grandson of Herod the Great and Salome's half-first cousin once removed. In AD 54 Nero made him king of Armenia Minor, part of the Armenian highlands west of Greater Armenia and south of the Black Sea. Armenia was a disputed kingdom between Rome and Parthia during the Roman-Persian Wars from 66 BC to the 2nd century AD. Aristobulus' rule, which lasted until AD 92, was a particularly contentious period. In AD 58 the Parthians attacked Armenia and fighting continued until Rome regained control in AD 63. In AD 72 Armenia Minor became a Roman province. According to Josephus, Salome bore Aristobulus three sons: Herod, Agrippa and Aristobulus (Antiquities 18.5.4). King Aristobulus minted coins with his likeness on the front and Salome on the back in the 3rd and 13th years of his reign. It appears, then, that Salome lived a minimum of 36 years after John's martyrdom.

The fortress-palace of Machaerus is located on top of a steep cone-shaped mountain located just east of the Dead Sea, at about its mid-point. Initial work was done at the site in 1968, 1978-1981 and 1992-1993. Since 2009, systematic excavations have been undertaken by the Hungarian Academy of Arts, in collaboration with the Jordanian Department of Antiquities (Vörös 2012). These excavations have revealed a strongly fortified, and at the same time luxurious, royal citadel. It was protected by a fortification wall with massive bastions on the north, west and south sides. In the northern bastion, excavators found intact walls as high as 30 feet. 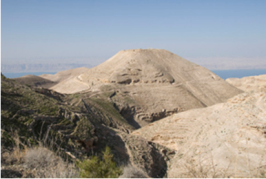 Machaerus, site of the martyrdom of John the Baptist, view northwest. Herod the Great built seven such fortress-palaces to guard his kingdom and himself. Machaerus is the only one located east of the Dead Sea/Jordan Valley rift. According to Pliny the Elder, Machaerus was the strongest citadel in Judea after Jerusalem. From here, there is a spectacular view of the Dead Sea, Jerusalem and the other six fortresses (left, Michael Luddeni; right, Vörös 2012: 41).

On the northeastern slope of the mountain was a lower city which housed several thousand (Josephus, War 7.7.4-5) non-royals who provided support for the palace-guards, kitchen and house-keeping personnel, water carriers to keep the enormous cisterns (one of which is 50 feet deep!) full, etc. John the Baptist would have been imprisoned in the lower city. It was from here that John sent his disciples to Galilee to ask Jesus, 'Are you the one who was to come, or should we expect someone else?' Jesus responded,

Go back and report to John what you hear and see: The blind receive sight, the lame walk, those who have leprosy are cured, the deaf hear, the dead are raised, and the good news is preached to the poor. Blessed is the man who does not fall away on account of me' (Mt 11:2-6).

John no doubt realized that his days were numbered. He wanted assurance that Jesus was indeed the long-awaited Messiah. Jesus gave him that assurance by relating His ministry to the miracles predicted of the Messiah in the Old Testament. John could now die in peace knowing that his mission had been accomplished. Jesus' words 'blessed is the man who does not fall away on account of me' was a commendation to John for fearlessly preaching God's word, calling people to repentance and pointing them to the Messiah, even those in high places. After John's disciples left, Jesus turned to the crowd and delivered what amounted to a eulogy to John the Baptist. In that message, he said, 'I tell you the truth: Among those born of women there has not risen anyone greater than John the Baptist' (Mt 11:11). John's work was finished; he would now take his place with the saints in heaven. John's disciples took his body and 'laid it in a tomb,' but where we do not know (Mk 6:29).

Plan and reconstruction of the palace-fortress of Machaerus where Salome danced before Herod Antipas (left, Vörös 2012: 36; right, Gyozo Vörös and the Hungarian Academy of the Arts).

Within the palace were a courtyard with a small royal garden, a Roman-style bath, a triclinium for formal dining and an elegant courtyard enclosed by porticoes on four sides. The courtyard was the grandest area of the palace and undoubtedly the place where Salome performed her dance.

Reconstruction of the elegant courtyard in Machaerus, quite possibly the scene of Herod Antipas' birthday party where Salome entertained. Note the semi-circular apse at the end of the courtyard. Excavators speculate that this is where Herod Antipas sat as he oversaw the festivities (Gyozo Vörös and the Hungarian Academy of the Arts).

At the north end of the courtyard, at the axial center of the room, is a semi-circular apse. The excavators believe this is where the king's throne was located and where Herod Antipas sat as he watched Salome dance.

John the Baptist's short life and ministry is an exemplary and challenging model for Christians today. He boldly proclaimed the truth of God's word, spoke out against the evils of his day and pointed people to the Savior. May God help us to follow John's example!

3. Referred to as 'Philip' in Mt 14:3 and Mk 6:17. Although a son of Herod the Great, he did not rule over a territory as did his other three half-brothers.

4. According to recent research Herod died in 1 BC, not 4 BC as previously thought.

2012 Machaerus: Where Salome Danced and John the Baptist Was Beheaded.