Peggy Miracle Consolver, an ABR supporter and dig volunteer, has published a book and study guide partially inspired by ABR’s research and her participation in the ABR excavations at Khirbet el-Maqatir, Israel. Read about her experiences, her book, and why she is returning to Israel to dig with ABR at Shiloh.

Peggy’s two books are available for purchase on Amazon. 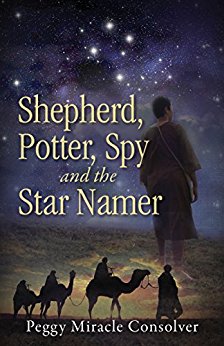 Eighteen days spent with the Associates for Biblical Research in Israel in 2010 was the adventure of my life. For years I had consulted maps at the back of my Bible, trying to visualize the setting of the stories. To actually visit many of those places changed my internal picture of biblical events from misty imaginings to solid reality.

I had begun writing historical fiction about the Gibeonites of Joshua 9 and 10 from the point of view of a young shepherd boy and his family of potters. Struggling with describing the historical and geographical setting one day, I quipped to my husband, “If I really write this story, maybe I should go there.”

About that same time, two friends took a tour of Israel with a noted radio preacher. They were two individuals on one of fifteen buses carrying six hundred people from one biblical landmark to another. Unimaginable.

Then, somehow... hubby found the Associates for Biblical Research.

From the first weekend tour of Caesarea, Megiddo, the Jezreel Valley and the Galilee region to squeezing in one more day trip to the tell of Jericho on the last day, the whole experience felt up close and personal. Moving and inspiring.

Early morning bus rides to the dig site at Khirbet el-Maqatir and watching the gray light of pre-dawn become a golden glow was one of the most poignant sights that translated directly to my biblical characters’ lives and experiences. Hearing the clink and scrape of a trowel on discarded and long-forgotten pottery rang true of everyday events of family, food, and survival ages ago.

Perhaps working in the pottery tent, where yesterday’s most promising finds at the dig site were catalogued and analyzed for scientific study, brought the ancient people into sharpest focus for me. In the last step, we sawed the pottery shards in half and examined the cut edges. What was baked into the clay revealed the components and the source of the clay. More than that, I could see the diligence, the resourcefulness and the integrity of one ancient player in history.

From there, the young shepherd and his father, the master potter, drew me deeper into the story. They and their neighbors lived the tension of imminent invasion when the Hebrews came out of the desert of Sinai about sixty miles to the south. They experienced relief when the Hebrews turned away—only to travel around the east side of the Salt Sea and appear again, months later, at the Jordan River ready to invade. This time the enemy was only 17 miles away!

The potter’s sons spy on the Hebrews from the rocky cliff above Jericho, see them cross the Jordan on dry ground, and witness the fall of Jericho and the burning of Ai (Khirbet el-Maqatir!).

Shepherd, Potter, Spy—and the Star Namer is the story of the Gibeonite delegation who approached Joshua not knowing if they would live or die. When asked why they came, they recounted all the reports of what the Hebrew God had done to bring about victory for the invaders.

It seemed apparent to me, the Gibeonites believed the reports they’d heard, and feared not knowing this real God who did such marvelous and powerful things for His people more than they feared the enemy horde.

Digging and touring with ABR was so inspirational to me and my husband, we are bringing our whole family, eleven of us, to the dig at Shiloh in 2017. It will be our 50th wedding anniversary gift to ourselves. What greater investment could we make in the lives of our children and grandchildren?

Check out this positive review at The Old Schoolouse (Off-site link).