Extra-Biblical Evidence for the Conquest 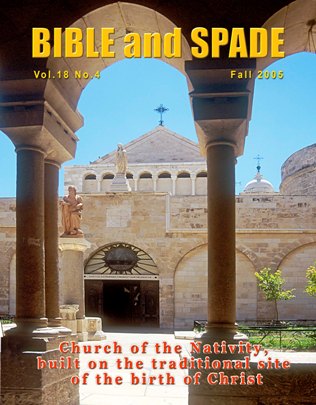 One of the challenges facing those who hold to a historical Conquest as presented in the book of Joshua is that there is alleged to be no other documentation for this event outside the Bible...

This article was first published in the Fall 2005 issue of Bible and Spade.

One of the challenges facing those who hold to a historical Conquest as presented in the book of Joshua is that there is alleged to be no other documentation for this event outside the Bible. Critics are quick to point out that the Bible is a religious book, so the Conquest account could have been exaggerated, or even fabricated, to support the author's religious message. To counter this, one can appeal to the archaeological evidence for destructions at Jericho, Kh. el-Maqatir (identified as Ai by this author) and Hazor as supportive of a Conquest around 1400 BC, the approximate date of the event according to Biblical chronology (Wood 1993: 262-69). But archaeological evidence is subject to interpretation, so those who disagree with the Biblical model readily can find reasons to dismiss this evidence as being irrelevant to the arrival of Israel in Canaan.

Secular scholars are generally of the opinion that any aspect of the early history of Israel prior to the kingdom period cannot be taken at face value unless the veracity of the events described can be validated by means of independent witnesses. This approach is strongly biased and nonscientific. Other ancient documents are assumed to be accurate unless there is credible evidence to suggest otherwise. These documents are just as religious as the Bible, as the writers of ancient texts regularly mention their pagan gods and what the gods did on their behalf.

Where do skeptics expect the required extra-Biblical documentation to come from? British scholar Kenneth Kitchen has pointed out the general dearth of historical texts from Canaan prior to the kingdom period (1998: 55-56). Apart from a few limited references to campaigns in Canaan in Egyptian records, the only historical texts we have are the Amarna Letters from a period of 20 or so years in the mid-14th century BC (Moran 1992). According to Biblical chronology, this would be the early Judges period, after the Conquest had already taken place. From the Conquest period itself, ca. 1406-1400 BC, we have no written records whatsoever that could provide an independent witness to events occurring in Canaan.

In spite of this negative appraisal, we do have several documents that provide indirect evidence as to the factuality of the Conquest. The Merenptah Stela has been known for over 100 years. One innocuous, but highly significant, section of the stela records a campaign into Canaan by Merenptah in about 1210 BC. One of the results of the campaign, according to the stela, was that, 'Israel is laid waste, having no seed. Khurru has become widowed, because of Nile-land' (Kitchen 2003: 15). As was so often the case in ancient records, the author was less than truthful in extolling Merenptah's accomplishments. Merenptah definitely did not annihilate Israel as the stela implies. On the other hand, the mention of Israel in the list of city-states and nations supposedly defeated by the Pharaoh attests that Israel was an important entity in Merenptah's day.

The king of the greatest nation on earth certainly would not have boasted of defeating an unknown or unimportant people. Since Israel is the only people group from central Canaan mentioned in the text, it suggests Israel was the most powerful populace in central Canaan at that time. In addition, Merenptah boasted that all of Khurru, a general term for Syria-Canaan, became a widow because of the alleged eradication of Israel. This indicates that Israel's loss would have been devastating to the entire region, again attesting to Israel's importance. In order to achieve this status, Israel must have been in Canaan for a significant length of time prior to 1210 BC. Thus, the Merenptah Stela provides indirect evidence that Israel came into the land ca. 1400 BC as the Bible indicates.

Two recent articles provide additional support for the Biblical model for Israel's entry into Canaan. The first deals with another apparent reference to Israel in an Egyptian text (Görg 2001). A column base fragment, now in the Egyptian Museum in Berlin, is inscribed with a portion of a name list. The surviving names are Ashkelon, Canaan and a third name that is only partially preserved. Görg interprets the third name as Israel. He dates the inscription to the reign of Ramesses II, earlier than the Merenptah Stela.

Even more important is the fact that Görg maintains, based on the spellings, that the names were copied from an even earlier name list from around the time of Amenhotep II, who ruled ca. 1453-1419 or 1427-1401 BC, depending upon which Egyptian chronology one uses. This is earth-shattering with regard to the date and nature of the Israelite entry into Canaan! If Görg is right, it would place Israel in Canaan at about the time of the Biblical date for the Conquest. But, like nearly all important archaeological discoveries, there is an element of uncertainty about Görg's conclusions. Since the name of Israel is only partially preserved, and the spelling is slightly different than on the Merenptah Stela, there is room for doubt. To date, however, no one has challenged Görg's interpretations.

The second article has to do with a strong tradition that the Phoenicians who settled in North Africa were driven out of Canaan by Joshua (Frendo 2002). A Greek historian named Procopius of Caesarea wrote in the sixth century AD,

They [the Canaanites] also built a fortress in Numidia, where now is the city called Tigisis [probably in Algeria]. In that place are two columns made of white stone near by the great spring, having Phoenician letters cut in them which say in the Phoenician tongue:'We are they who fled from before the face of Joshua, the robber, the son of Nun' (Frendo 2002: 37).

Moses of Khoren, an earlier Armenian historian (AD 370-86), also referred to the two inscribed Phoenician columns (Frendo 2002: 38). Later Greek historians referred to this tradition. For example, it is stated in the Chronicon Paschale, an anonymous work from about AD 630,

The inhabitants of these [islands, i.e., the Balearic Islands north of Algeria and east of Spain] were Canaanites fleeing from the face of Joshua the son of Nun (Frendo 2002: 40).

The original Greek text of this quotation is much earlier, going back to 234 BC (Frendo 2002: 40). It is highly unlikely that the Phoenicians of North Africa would have invented such a demeaning tradition to explain how they came to be in North Africa.

Although one can explain away individual portions of the evidence for a Conquest, the cumulative total of the Biblical, archaeological and extra-Biblical evidence presents a strong case for the historicity of the Biblical account of the Conquest of Canaan as recorded in the book of Joshua and alluded to elsewhere throughout the Old Testament.