Author: Bryant G. Wood PhD
Category: Conquest of Canaan under Joshua & the Inception of the Period of the Judges 1406-1371 BC
Created: 09 February 2010

Infant jar burials beneath the floors of domestic houses are a relatively common find at archaeological sites in Israel. They are mostly from the Middle Bronze period, less common in Late Bronze I and unknown in Late Bronze II. The infant jar burial excavated by the ABR team during the 2009 season at Kh. el-Maqatir, although similar to other known examples, is unique in that Kh. el-Maqatir is a fortress and not an urban center...

Infant jar burials beneath the floors of domestic houses are a relatively common find at archaeological sites in Israel. They are mostly from the Middle Bronze period (ca. 1750-1500 BC), less common in Late Bronze I (ca. 1500-1400 BC) and unknown in Late Bronze II (ca. 1400-1200 BC). The infant jar burial excavated by the ABR team during the 2009 season at Kh. el-Maqatir, although similar to other known examples, is unique in that Kh. el-Maqatir is a fortress and not an urban center.

Entrance gateway and building remains of the Late Bronze I fortress at Kh. el-Maqatir. (Plan by Bryant G. Wood).

As can be seen in the above plan, the burial was found beneath a building located just inside the entrance gateway of the Late Bronze I fortress. In the Bronze and Iron Ages, important administrative structures were located near the city gate. The burial indicates that the building inside the gate at Kh. el-Maqatir was not only an administrative center, but also a place where people lived. This suggests that the building was the 'Commandant's House,' which served both as the living quarters for the fortress commander and the administrative center for the fortress. Since the evidence we have gathered at Kh. el-Maqatir strongly suggests that this is the site of Joshua's Ai (Jos 7-8; Wood 2009), it is logical to conclude that the building was the residence of the king of Ai, who features prominently in the narrative of Joshua 8.

Nature of the Burial 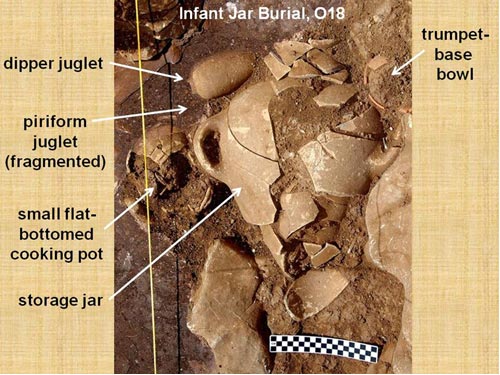 The jar burial was placed on bedrock, just 15 inches below the present day surface. An opening had been cut into the bottom of a small storage jar and the remains of the deceased infant placed inside. Several memorial vessels, perhaps originally containing offerings, were carefully placed around the outside of the storage jar. All of the vessels, including the storage jar, were found to be empty. How, then, do we know that it was an infant burial? 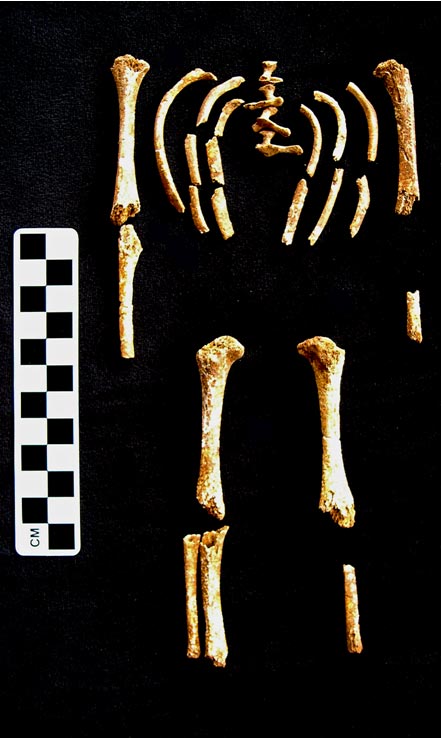 Bones of a 'perinatal' infant found in the vicinity of the burial jar. (Photo by Bryant G. Wood).

Scattered about the storage jar were the bones of a perinatal infant, as identified by physical anthropologists at Hebrew University in Jerusalem. Perinatal means 'around the time of birth' and is defined as a fetus beyond the 20th day of gestation or a newborn less than 28 days old. It appears that a rodent pulled the remains from the jar and scattered them about the area. Undoubtedly, the mother of the deceased infant lived in the building where the burial was made. The biblical reference to women living at Ai (Jos 8:25), which one would think highly unlikely, was, in fact, the case.

The infant jar burial found at Kh. el-Maqatir puts us in close contact with the Amorites who manned this border outpost. They were ordinary human beings who evidently had their families with them while on duty. When giving birth, the women did not go to a hospital in Jerusalem, but had the child wherever they happened to be at the time. Infant mortality was high in antiquity and many times the newborn did not survive. Was our burial a child of the king of Ai of the Bible, or perhaps one of his predecessors? We shall never know, but the find allows us a view beyond the biblical narrative into the everyday lives of the people who lived at Ai some 3500 years ago. 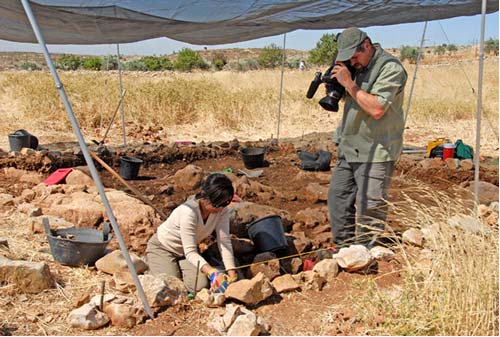 Joel Kramer of Sourceflix Productions filming volunteer Jacqueline Maestrado of Langley, Canada, as she excavates the infant jar burial during the 2009 season at Kh. el-Maqatir. (Photo by Michael Luddeni).

2009 The ABR Excavation at Khirbet el-Maqatir: Review of Past Work and Report on the 2009 Season. ABR Newsletter July 2009.