It was not until I was doing research for my Ph.D. thesis in the early 1980s that my attention was drawn to the findings at Jericho. In reviewing all of the published pottery from the Late Bronze Age in Palestine, I came across John Garstang's pottery from the cemetery and destruction level at Jericho. Although earlier than the focus of my thesis, I was struck by the amount of pottery he had published that dated to the Late Bronze I period (ca. 1500

This article was first published in the Summer 2009 issue of Bible and Spade.

I am often asked, 'How did you get started doing research on Jericho? As a boy did you dream of becoming an archaeologist so you could find evidence that would prove the biblical account really happened?' Hardly! When I was growing up in Endicott NY, my goal was to get a well-paying job! I knew little about the Bible, and the only archaeology I had heard about was excavating American Indian sites. I began my adult career as a mechanical engineer, but soon thereafter gained an interest in the Bible and in the archaeological findings that illuminated its pages. That interest resulted in my leaving engineering in 1973 to pursue biblical and archaeological studies. So much for a well-paying job!

But Jericho was still not in the picture. It was not until I was doing research for my Ph.D. thesis in the early 1980s that my attention was drawn to the findings at Jericho. In reviewing all of the published pottery from the Late Bronze Age in Palestine, I came across John Garstang's pottery from the cemetery and destruction level at Jericho (1933; 1934). Although earlier than the focus of my thesis, I was struck by the amount of pottery he had published that dated to the Late Bronze I period (ca. 1500-1400 BC), the time of the Conquest and the very time period Kathleen Kenyon said was missing from the tell. 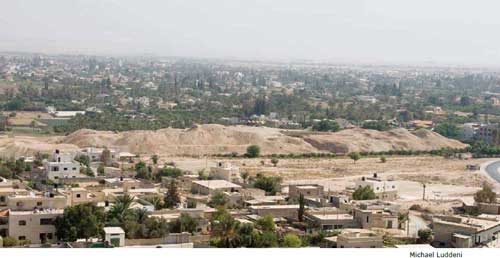 The ruins of ancient Jericho, looking east toward the Jordan River. The low-lying area at the north end of the mound is the dump from Garstang's 1930s excavation. The total area of the city, including the fortification rampart, was about 9 acres, with a circumference of about ½ mile. Thus, the Israelites easily could have walked around the city seven times in one day (Jos 6:15).

Upon completing my Ph.D. in 1985, the year before I joined the staff of ABR, I further pursued the matter of Kenyon's dating of Jericho and soon discovered that she had erred, and that Garstang's date is the preferred one (Wood 1990: 51-53). I presented the results of my research at three archaeological conferences in 1987. Hershel Shanks, editor of Biblical Archaeology Review, the largest circulation magazine on biblical archaeology, happened to hear one of the presentations and invited me to write an article on the subject for his magazine. This appeared in 1990 and resulted in my Jericho research being spread around the world (Cornell 1990; Lemonick 1990; Wilford 1990; Horn 1991: 69).

The battle for Jericho is still not over. It remains for me to publish a critique of Kenyon's theories and an in-depth study of the pottery from the various expeditions, to demonstrate that Kenyon's conclusions were incorrect and that Garstang's analysis is the correct interpretation for the dating of the destruction of Jericho.

Dr. Wood is interviewed extensively by SourceFlix for the DVD Jericho Unearthed. 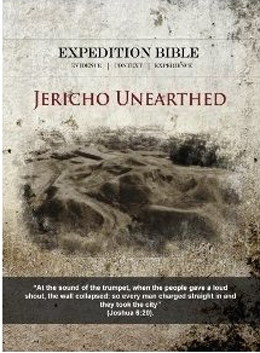 Here is a review from a long time ABR supporter:

'Last night my wife and I watched our newly arrived DVD 'Jericho Unearthed'. We were both very impressed with the presentation. I was well aware of the issues having read/studied Dr. Wood's stuff in both BAR from sometime in the 1990's plus material in Bible and Spade and having heard in person several lectures. My wife was not acquainted with the matter. We both thought that the presentation was extremely understandable for folks without any background. We plan to have our 7 year old grandchildren watch it for we believe the presentation will communicate well with them.'

This DVD extensively features Dr. Bryant Wood on the ground in Israel at the site of Jericho. The evidence from Jericho is presented, the basics of archaeology are explained, and the history of excavations at Jericho are also outlined. Jericho Unearthed has a cutting edge feel and presentation that is useful for Bible study, Sunday school and teaching teenagers. Jericho Unearthed can be used by Christians scholars and laymen alike as an effective witnessing tool in support of the Bible's inerrancy and historical reliability.

Kenyon, Kathleen M.
1951 Some Notes on the History of Jericho in the Second Millennium B.C. Palestine Exploration Quarterly 83: 101-38.

1967b Jericho. Archaeology 20: 268-75. Reprinted pp. 19-28 in Archaeological Discoveries in the Holy Land, compiled by The Archaeological Institute of America. New York: Bonanza, 1967.

Wilford, John N.
1990 Believers Score in Battle Over the Battle of Jericho. The New York Times, February 22: A8.

1987a A Comparison of the Archaeological and Biblical History of Jericho in the Late Bronze Age. Near East Archaeological Society, Gordon- Conwell Theological Seminary, South Hamilton MA.

1987b Jericho Revisited: The Archaeology and History of Jericho in the Late Bronze Age. American Schools of Oriental Research, Boston.

1987c Jericho Revisited: The Archaeology and History of Jericho in the Late Bronze Age. Who Was the Pharaoh of the Exodus Symposium.