In Search of Mt. Sinai

This article was first published in the June 2007 ABR E-Newsletter.


The site favored by most scholars is Gebel Musa (Mountain of Moses), or one of several nearby mountains, in the high-mountain region of southern Sinai.

This problem is of utmost importance, since finding the correct location of Mt. Sinai is at the heart of the question of the historicity of the Exodus account. Scholars today largely discount the Biblical account of the sojourn in Egypt, Exodus and wilderness wanderings as fictional. They reach this conclusion because they say there is no concrete evidence that Israel ever was in Egypt or the Sinai.

The only Jewish tradition we have concerning Mt. Sinai is that it is a low mountain (Babylonian Talmud and BaMidbar Rabbah). Gebel Musa, on the other hand, is very high (7,497 ft.). There are a number of other difficulties with a southern Sinai location for Mt. Sinai. To begin with, it is in the opposite direction from the Promised Land! Moreover, it is much too far from Midian (east of the Gulf of Aqaba) for Moses to have been shepherding Jethro's flocks there (Exod. 3:1). A third difficulty is that Mt. Sinai (also called Mt. Horeb) was located in the territory of Edom (Deut. 33:2, Judges 5:4; Hab. 3:3), which did not extend south of the north shore of the Gulf of Aqaba (Crew 2002). The most serious objection to the traditional location, however, is that it is too far from Kadesh Barnea for the Israelites with their livestock (Exod. 13:38) to have made the journey in 11 days (Deut. 1:2; Wood 2000: 99).

The Bible gives detailed information as to the stopping places of the Israelites on their way to, and after they left, Mt. Sinai, including travel times. But very few of the stopping places can be identified with confidence. It is possible, however, to determine the general area of Mt. Sinai from the Biblical data.

When Moses journeyed from Midian to Egypt in obedience to God (Exod.4:19-20), he would have traveled by way of the Trans-Sinai Highway, which goes from the northern shore of the Gulf of Aqaba across the Sinai Peninsula to the northern end of the Gulf of Suez. Back in Egypt, God appeared to Aaron and commanded him, 'Go into the desert to meet Moses' (Exod. 4:27a). Aaron likewise would have traversed this same road since it was the most direct route from Egypt to Midian. And where did Aaron meet Moses? 'So he met Moses at the Mountain of God and kissed him' (Exod. 4:27b). Therefore, we would expect the Mountain of God (= Mt. Sinai/Horeb) to be located somewhere along the Trans-Sinai Highway.

Based on the travel times given in the Old Testament (60 days from Rameses to the Desert of Sinai [Exod. 19:1; Num. 33:3] and 11 days from Mt. Sinai to Kadesh Barnea [Deut. 1:2]), and the rate of travel of the Israelites (5-7 mi per day [Wood 2000: 99]), Mt. Sinai should be toward the eastern end of the Trans-Sinai Highway. Interestingly, none of the previously proposed candidates are in this area-they are north, south, east or west!

In the TV documentary, The Exodus Decoded, first aired in the US in August 2006, the producers suggested that Gebel Khashm et-Tarif, located at the eastern end of the Trans-Sinai Highway (N 29º 40' 15', E 34º 37' 30'), is the location of Mt. Sinai. In March 2007 a small team of ABR researchers spent two weeks in the Sinai to check the feasibility of this theory. Although further research is needed, our preliminary assessment is that the mountain fits the Biblical requirements very well:

In addition to meeting these Biblical requirements, Gebel Khashm et-Tarif is a low mountain (2,870 ft.), in accordance with Jewish tradition. Israeli investigator Uzi Avner located 33 rectangular 'open air sanctuaries'east and south of the mountain (1984: 120-21). Each one is ca. 25 x 50 ft.in size and comprised of a single row of stones. Religious shrines do not normally appear in such large numbers in a single location. They are typically individual structures with cultic material inside. No cultic material was found in association with the buildings at Gebel Khashm et-Tarif. A far more reasonable hypothesis is that the structures are domestic in nature, perhaps stones placed around the periphery of tents. 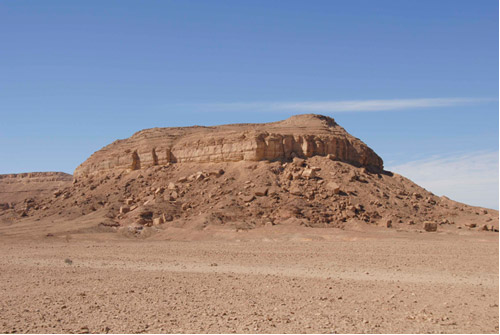 During the brief visit of the ABR team in March 2007 we discovered five similar buildings south of the mountain, suggesting there are many more such structures in the vicinity. Are the buildings the remains of an ancient campsite? In order to postulate a connection between the buildings and the Israelites, it is necessary to demonstrate that they date to the time of the Exodus. Dating the buildings at Gebel Khashm et-Tarif will be a major objective of future ABR research.