For Young Archaeologists: Herod the Great

Herod the Great was the first Herod to rule over all of Israel. Among his list of accomplishments are numerous fortresses, buildings and cities he erected, including rebuilding the great Temple in Jerusalem, and expanding the Temple Mount where it stood.

Archaeology is a wonderful tool used for discovering the past. The things that are dug out of the ground shed light, understanding, and truth to a history that would otherwise remain unclear. For example, have you ever read about the birth of the baby Jesus in Sunday school? Well, the Bible says that Herod the Great was the man who ruled in Israel at that time, and I will show you how archaeology confirms this man was a real person and ruler just like the Bible says. But first here is a little history on this Biblical character. 'Herod' is a family name like Smith or Johnson. The Herods governed Israel from about 37 BC to AD 66. This family came from Edom, where the descendents of the line of Esau lived (the Israelites were descendents of Jacob, Esau's brother). They were harsh rulers, and as we read the Bible we see that many of them played a significant role in the lives of Jesus and his followers. Herod the Great was the first Herod to rule over all of Israel. He was called 'the Great' not because he was a wonderful person of character and mercy, but rather because he did many things that the world would consider 'great.' Among his list of accomplishments are numerous fortresses, buildings and cities he erected, including rebuilding the great Temple in Jerusalem, and expanding the Temple Mount where it stood. 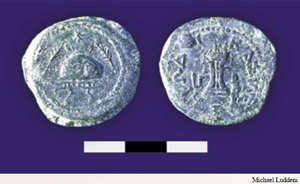 Bronze coin of Herod the Great excavated at Khirbet el-Maqatir by the Associates for Biblical Research. On the obverse (front) side (right) is a tripod and ceremonial bowl with the inscription 'Herod king' and the year the coin was struck, 'year 3' (of Herod's reign), or 37 BC. On the reverse side (left) is a military helmet, wreath, star and two palm branches.

Herod the Great loved his power so much he decided he would keep it at all costs. He put many people to death including several of his sons, as well as his wife Miriam and her brother Aristobulus. When Jesus was a baby, Herod was told that his kingship was in danger because a new King had been born and this new King would someday take over and become the'King of the Jews.' Herod was not about to give up his reign. He wanted someone to tell him who this new king would be but no one knew exactly. All they knew was that this future king had recently been born in Bethlehem and was now about two years old. So Herod decided to have all the male children in the Bethlehem area killed who were two years old and younger. He thought that by doing this he would get rid of the threat to his power. What Herod did not understand was that the foretold 'King' would not be someone who was interested in becoming his rival for power, but someone whose Kingdom was far greater than just Herod's small area of authority. That someone was Jesus, King of all Kings. No matter how hard Herod tried he could not stop God's plan for the One and Only true 'King of the Jews' from coming into this world and bringing with Him the salvation of everyone who will trust in Him.

Archaeology clearly confirms the fact that Herod was a real person. During an expedition in 1996, at a fortress named Masada, archaeologists uncovered a piece of a two-handled, clay, wine jug that had Herod's name on it. This piece of pottery was dated to around 19 BC. Archaeologist Ehud Netzer of Hebrew University said; 'The Latin inscription [on the piece of clay] says either 'HEROD, KING OF JUDEA' or 'HEROD, KING OF THE JEWS.' This is a perfect example of how archaeology supports what the Bible says.