The Arch of Titus and the Olive Tree of Romans 11

The Arch of Titus commemorated the triumphal procession by the Roman army after the destruction of the Jerusalem Temple and also memorialized the apotheosis (deification) of Titus; but what of the olive trees? 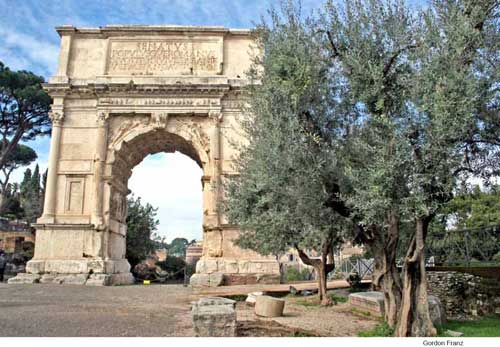 Olive trees (right) line part of the Via Sacra leading up to the Arch of Titus. The olive tree demonstrates that God still loves ethnic Israel, and one day 'all Israel will be saved.'

During the last two decades of the first century AD, Rome was in the grip of the self-deified Emperor Domitian. Imagine a small group of believers in the Lord Jesus walking past the Coliseum in Rome and turning westward toward the Roman Forum and the Capitoline Hill. They observe, at the highest point of the Via Sacra (Sacred Way), the newly erected Arch of Titus. Perhaps a few in this group might be struck by the olive groves on both sides of the road and caught the irony of this view. The Arch of Titus commemorated the triumphal procession by the Roman army after the destruction of the Jerusalem Temple and also memorialized the apotheosis (deification) of Titus; but what of the olive trees? 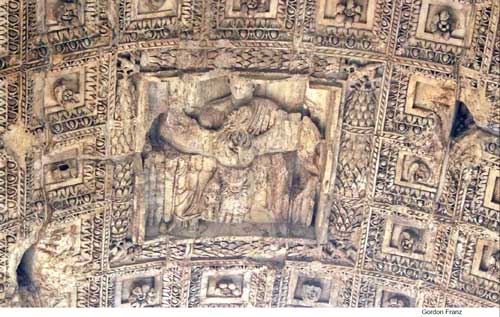 The Apotheosis of Emperor Titus. An eagle carries the dead Emperor Titus to heaven after he was deified by the Roman Senate.

Imagine again that one of the individuals in this group had survived the destruction of the Holy City of Jerusalem by the Roman army, was brought to Rome as a prisoner, and had been paraded as a captive in the triumphal procession of Emperor Vespasian and his son Titus. He was later sold as a slave in the Eternal City, Rome. Perhaps the household this individual was sold into also had Christian slaves. Eventually, one of the Christians shared with this Jewish person the gospel (good news) of Jesus Christ. The message was simple: God loved the world and sent His Son, the spotless Lamb of God-the sinless Lord Jesus-to die and pay for the sins of all humanity. He offers the free gift of eternal life, the forgiveness of sins, God's righteousness and a home in Heaven to any and all that would put their trust in the Lord Jesus as their Savior. Doing good works and obeying the commandments were not good enough to merit God's righteousness. Only faith alone, in the Lord Jesus Christ alone, would gain God's favor (Jn 3:16; Rom 4:5; Phil 3:9; Eph 2:8-9; 1 Pt 1:18, 19; 1 Jn 2:2). This Jewish slave was touched by this message and trusted the Lord Jesus as Messiah and Savior.

As this group of believers walks up the Via Sacra, the new convert ponders some verses that were read that morning at a meeting of the brothers and sisters in the Messiah Jesus. The verses said: 'Who shall separate us from the love of Christ? Shall tribulation, or distress, or persecution, or famine, or nakedness, or peril or sword? As it is written: 'For Your sake we are killed all day long; we are accounted as sheep for the slaughter.' Yet in all these things we are more than conquerors through Him who loved us. For I am persuaded that neither death nor life, nor angels nor principalities, nor powers, nor things present nor things to come, nor height nor depth, nor any other created thing, shall be able to separate us from the love of God which is in Christ Jesus our Lord' (Rom 8:35-39, NKJV).

The Jewish convert was joyful in the fact that absolutely nothing could separate a believer in the Lord Jesus from the love of God. But there were several burning questions in his mind, who as a teenager had experienced tribulation, distress, persecution, famine, nakedness, peril and sword at the hands of the Romans in Jerusalem several decades before. When he viewed for the first time the panel on the Arch of Titus depicting the Temple implements being carried off in the triumphal procession, he asked the group: 'Does God still love ethnic Israel? He said He did (Dt 7:8; Jer 31:3). Is He finished with her, or is there still a future for the nation of Israel?' The leader stepped off the Via Sacra and walked over to a branch in the olive groves and said, 'The answer to your question, dear brother, is found in this olive tree. Yes, our loving God still has a future for the nation of Israel!'

The Arch of Titus

Emperor Domitian erected this single-fornix arch with elegant proportions in memory of his deceased brother, Titus, after he was deified by the Roman Senate in AD 81. Above the arch is an inscription that reads: 'The Senate and the Roman people to the deified Titus Vespasian Augustus the son of the deified Vespasian' (Holloway 1987: 184). This arch stands 50.5 ft (15.4 m) high, 44.3 ft (13.5 m) wide and 15.5 ft (4.75 m) deep, and is faced with Pentelic marble (Richardson 1992: 30).

There are three reliefs that would have caught the eyes of anybody walking under the arch. As one looks up to the crown of the arch, there is a relief showing an eagle carrying the deified Emperor Titus to heaven. This represented his apotheosis. There are also two passageway reliefs to note. On the south side is a relief of the Roman army carrying off the booty from Herod's Temple in Jerusalem in the year AD 70. This relief includes a menorah (lamp stand), the table of showbread with two vessels on it, and the two silver trumpets. There are also soldiers holding signs with names of the cities conquered or pictures of various battle scenes. On the north side of the passageway is a relief with Titus riding a chariot being driven by Roma. Nike, the goddess of victory, is crowning him with a wreath, showing his victory over the Jewish nation.

Josephus, the first century Jewish historian and an adopted member of the Flavian family, gave a detailed account of this triumphal procession in his book, Jewish Wars, written about AD 75 (7:123-57; LCL 3:541-51). After the triumph, some of the objects were placed in the Temple of Peace (Templum Pax) built by Vespasian near the Roman Forum, and other objects were placed in his palace on the Palatine Hill (Wars 7:158-62; LCL 3:551-53; Richardson 1992: 286-87).

There was another arch in the Circus Maximus, built a few years earlier, that was dedicated to Emperor Titus' victory over the Jewish people, but it is not known archaeologically today. It is, however, known from coins, reliefs and mosaics (Richardson 1992: 30). One of the inscriptions on this arch states:

The Senate and the Roman People to the Emperor Titus Caesar Vespasian Augustus the son of the deified Vespasian Pontifex Maximus, holder of the tribunician power for the tenth time, imperator for the seventeenth time, consul for the eighth time, father of the fatherland, the very princeps of Rome because by example and advice of his father he overcame the Jews and destroyed the city of Jerusalem which even before was besieged by generals, Kings and peoples in vain or left unmolested by them (Holloway 1987: 191). 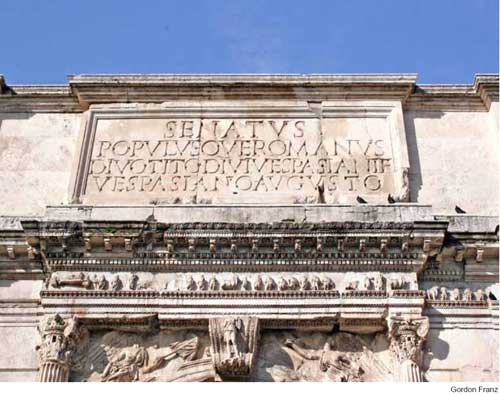 The dedicatory inscription above the Arch of Titus, which reads: 'The Senate and the Roman people to the deified Titus Vespasian Augustus the son of the deified Vespasian.' 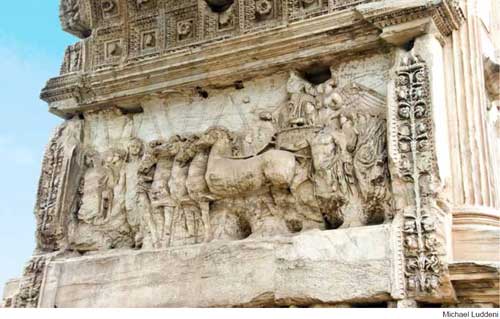 Titus riding a chariot in the triumphal procession that commemorated the destruction of Jerusalem. Nike, the goddess of victory, is shown crowning him with a victor's wreath.

The Olive Tree in Romans 11

The Apostle Paul wrote an epistle to the church in Rome about AD 58. At the end of chapter 8 of this epistle he asks the question, 'What can separate us from the love of God?' (8:35). He answers his own question by saying, absolutely nothing! (8:35-39). A Jewish believer in the Lord Jesus, reading this statement after the fall of Jerusalem in AD 70, might ask the question, 'What about ethnic Israel? Is God finished with her?' Paul answers these questions in the next three chapters of this book (Rom 9-11). In chapter 9 he discusses the past history of Israel and her election by grace. In chapter 10 he describes present-day Israel and how she is seeking righteousness from God by works, and not by faith alone in Christ alone. Finally, in chapter 11 he reveals the future for ethnic Israel. One day, all Israel will be saved (11:26).

Our imaginary group gathers around an olive tree near the Arch of Titus. The leader points to a wild olive branch that had been grafted into the olive tree and says, 'The Apostle Paul wrote a letter to our church and described the root of an olive tree as the blessings to all the families of the earth promised in the Abrahamic Covenant (Rom 11:16-18; cf. Gn 12:3, Gal 3:6-9). Some of the branches of the olive tree, ethnic Israel, had been broken off because of their unbelief; yet wild olive branches, Gentiles, were grafted in (11:17-22). The salvation of Gentiles was to provoke ethnic Israel to jealousy (11:11-14). If an individual Jewish person returned to the Lord Jesus and trusted Him as Messiah and Savior, they would be grafted back into the tree (11:23-25). But there is a day coming when 'all Israel shall be saved' when they look upon Him whom they have pierced (11:26; cf. Zec 12:10, Rv 1:7).'

There are at least two theological truths that could be drawn by a believer in the Lord Jesus in the first century AD who visited the Arch of Titus. First, that Emperor Titus had been declared to be the son of a god by a vote of the Roman Senate, and his apotheosis was validated by large inscriptions over monumental structures, by coins, and by a relief showing him ascending to heaven on the back of an eagle. In sharp contrast, the Lord Jesus was declared to be the Son of God by His bodily resurrection from the dead (Rom 1:3-4), and this declaration was validated by the many eyewitnesses who saw Him after His resurrection (1 Cor 15:1-9). The resurrected and living Lord Jesus is infinitely superior to the dead and cremated Emperor Titus (Aitken 2001: 73-88; 2005: 82-85). 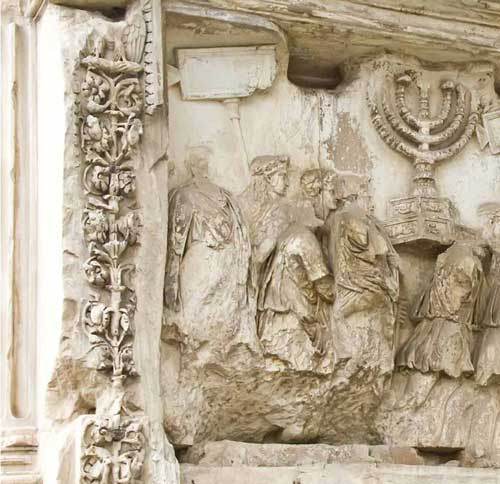 Roman soldiers carrying the booty from the destruction of Jerusalem in AD 70 in a triumphal procession. The soldiers carry panels with of showbread, as they approach an earlier triumphal arch on the relief.

Second, the two scenes from the passageway of the Arch of Titus indicated that the Temple in Jerusalem was destroyed, and some might conclude that God had rejected ethnic Israel. However, the Apostle Paul illustrated from the olive tree in Romans 11 that Israel's rejection was not complete but only partial, and that there remains a remnant of Israel according to the election of grace (11:5). Their rejection was not final but only temporary, because one day in the future 'all Israel shall be saved' (11:26). 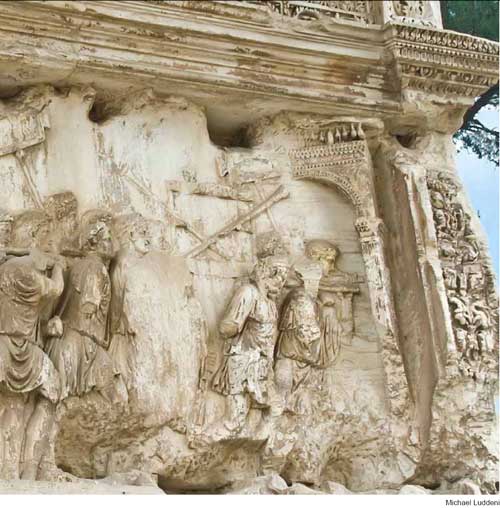 Paintings depicting the battles of the Jewish revolt and the menorah from the Temple, as well as the two silver trumpets and the table.

2001 Portraying the Temple in Stone and Text: The Arch of Titus and the Epistle to the Hebrews. Pp. 73-88 in Religious Texts and Material Context. Eds. J. Neusner and J. Strange. Lanham MD: University Press of America.

1988 The Letter of Paul to the Romans. Grand Rapids MI: Eerdmans.