The King and I: Opening The Third Seal, Part 3 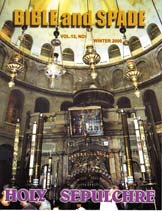 This article was first published in the Winter 2000 issue of Bible and Spade.

When He opened the third seal, I heard the third living creature say, 'Come and see.' And I looked, and behold, a black horse, and he who sat on it had a pair of scales in his hands. And I heard a voice in the midst of the four living creatures saying, 'A quart of wheat for a denarius, and three quarts of barley for a denarius; and do not harm the oil and the wine.' (Rv 6:5-6 NKJV)

This is how the Apostle John describes opening of the third seal, and it has led to a number of interesting interpretations by end-time prophesy teachers. In Days of Hunger, Days of Chaos, Tex Marrs (1999) suggested the third seal judgment will be a worldwide famine caused by government and corporate manipulation of the seed supply. He calls it the 'Global Seeds Conspiracy.' Interestingly, he did not touch the phrase 'do not harm the oil and wine.'

In Paranoia, a conspiratorial-type magazine, the phrase 'do not harm the oil and the wine' was suggested to be fulfilled in November 1992. This was when President George H.W. Bush 'announced that he would not triple the tariff on rapeseed oil and Chardonnay wine' (Wallace 1995:1). The author suggested this was the only time in history that oil and wine, and only oil and wine, received the attention of the international market.

At the opening of the 'third seal,' in Revelation 6:6, basic food staples will be meted out in small amounts and sold at rates that make possible only a bare subsistence. This is the fate of the common man. Note that the wealthy will still have access to their 'oil and . . . wine.' As always, during hard times, the division between rich and poor grows wider. Not only the Bible, but the population figures themselves, point to a future global famine. 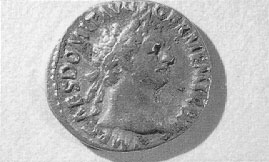 A silver denarius coin minted during the reign of Emperor Domitian. At the opening of the third seal, one of these coins - approximately one day's wage - was said to be needed to buy a quart of wheat.

Yet, does a straightforward reading of Revelation 6 credibly lead to any of these observations: 1, that the third seal judgment spoke of a global conspiracy to control the seed supply; 2, that the third seal was fulfilled with President Bush's 1992 announcement; 3, that bread is food for the poor only, oil and wine only for the rich?

Nogah Hareuveni, founder of Neot Kedumim (the Biblical Landscape Reserve in Israel), always said of interpreting agricultural passages in Scripture - 'Let's look for the obvious!' There is no need to spiritualize, allegorize, or devotionalize the interpretation of this passage, or any other passage relating to agriculture or nature in the land of Israel or the entire Mediterranean Basin.

In the third seal, the rider on the black horse is apparently trying to sell wheat and barley at an expensive price, due to a shortage of grain. Yet, he is not to touch the oil and wine. A recent visit by the author to the island of Patmos, in combination with an unusual weather pattern and an upcoming Jewish holiday, triggered the 'obvious' interpretation of this passage.

One afternoon, a rainbow appeared over the island's eastern end. Not unusual in itself-John saw two rainbows while on the island (Rv 4:3; 10:1)-the timing was significant. Rainbows are caused by the diffraction of sunlight through raindrops, and this particular rainbow occurred five days before Shavuot 1997. Also known as the Feast of Weeks (Ex 34:22) or Pentecost (Acts 2:1), it marks the beginning of the wheat harvest (Ex. 23:16; Nm 28:26). As pointed out by Helen Frenkley, director of Neot Kedumim:

The Hebrew for Feast of Harvest is Hag Ha-Katzir. Katzir means harvest of grain, and since the barley harvest begins on Passover, Shavuot is the start of the wheat harvest' (personal correspondence, Aug. 24, 1997).

Most commentators interpret the third seal as famine resulting from the conflicts and wars mentioned in the first two seals (Rv 6:1-4). Some also suggest oil and wine as luxury items of the rich. This writer suggests the first interpretation is plausible, the second is not. A better explanation comes from the agricultural cycle and weather patterns from the Scriptures. 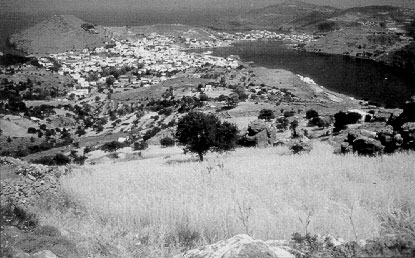 Wheat field on the island of Patmos ready for harvest in June 1997.

These four were the most important of the 'seven varieties' (Dt 8:7-10), with figs, pomegranates and (date) honey the other three. Yet, all seven share a common fate determined by the delicate balance of weather between Passover and Shavuot (Hareuvedni 1980:30-45).

An observant Jewish farmer, rich or poor, living in the land of Israel during the Talmudic period, would remember this phrase every time he recited Deuteronomy 11 at a Shabbat meal. On Friday night the 'table of man' was set with Hallah bread made from grains, wine from grapes, and the (olive) oil lamp. Each was a reminder that their 'daily bread' came from the Lord.

The farmer would pray for the right wind to blow at the appropriate time during the seven weeks, or 50 days, between Passover and Shavuot. As the rabbis said:

The north wind usually brings rain during the winter months (Prv 25:23) and is beneficial in the first third of the ripening of wheat and barley. Yet this same rain ruins the buds of olive trees or grape vines if they are already opened. Rain washes away pollen from the open buds and the tree or vine cannot be pollinated and fertilized. The southern wind is good for the pollination of olive and grapes, if it comes later in the 50 days. Coming early, it will not permit the grain to be filled with starch and the crop will be decimated (cf. Gn 41:6). So the farmer prays for the winds to come at the right time. Yet, even if the winds come at the right time, but the rain come after 'its season,' the grain crop will still be ruined (Lv 26:4; Dt 11:14; 28; 12). Someone once said, 'The best commentary on the Bible is the Bible itself.' 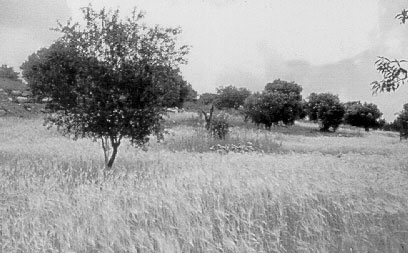 Another example of the third seal judgment, albeit on a smaller scale, is recorded in 1 Samuel 12. Heavy rains during the wheat harvest would bring disaster for the wheat farmer. This occurrence is illustrated in 1 Samuel 12:

Is today not the wheat harvest? I [Samuel] will call to the LORD, and He will send thunder and rain, that you may perceive and see that your wickedness is great, which you have done in the sight of the LORD, in asking for a king for yourselves.' The people cried out, 'Pray for your servants to the LORD your God, that we may not die (vv. 17, 19, NKJV).

People do not die from thunder and rain! However, as Nogah Hareuveni (1988: 25) has pointed out:

The ripe, heavy-eared wheat can suffer from a downpour not only through physical damage from the force of the wind-driven rain, but also by rotting from the sudden moisture combined with the high temperature that prevail in Israel by Shavuot (in late May-early June). This is why the Israelites cried out to Samuel to 'pray . . . to save us from death' (1 Sm 12:19)-from death by starvation that would follow the destruction of the grain crop.

Mildew is one of the results of disobedience to the Word of God (Dt 28:22; 1 Kgs 8:28; 2 Chr. 6:28; Amos 4:9; Hag 2:17; Borowski 1987: 158-60). This author experienced such a phenomenon in Israel during June 1992. For two days, Israel was washed with heavy rains and the wheat harvest was devastated by mildew. Ironically, it was right before the national elections when people were crying out 'Itzhaq, melek Yisrael! Itzhaq, melek Yisrael' (Itzhaq, king of Israel) at their election rallies!!!

The third seal judgment of Revelation 6 has nothing to do with a global seed conspiracy, nor was it fulfilled in 1992 by President Bush's decision not to put a tariff on rapeseed oil and Chardonnay wine. However, the third seal judgment is validation of Adam Smith's law of supply and demand. Apparently, at the time of Revelation 6, an untimely rainstorm during wheat harvest destroys a great portion of the crop in Israel and the rest of the Mediterranean world.

Demand for wheat and the shortage of supply will lead to higher prices for both wheat and barley. Olive trees and grapevines ('oil and wine') are not affected by this rainstorm, because they will have already been pollinated. In fact, the rain might even help them, giving oil and wine for all-rich and poor alike. This is an 'obvious' interpretation from the agriculture cycle and weather patterns of Scripture.

This series of three articles attempted to put Revelation 1:9 in its proper historical and geographical context. The Apostle John was exiled to Patmos because he took a stand for the Word of God and the God of the Word. Even with the temple to the self-proclaimed deified Emperor in his backyard, John refused to bow. Yet when he saw the glorified Son of Man in a vision on Patmos, he fell down as dead. On Patmos, John was free to move about the island. I cannot help but imagine John standing on the piers in the Patmos harbor passing out gospel tracts to sailors coming and going from the island. Possibly he even sent his message, the Book of Revelation, by ship back to Ephesus. Maybe it went with the seven messengers from seven churches in Asia Minor who visited him (Rv 2-3).

This book encourages believers going through difficult times. They are to take a stand for the Lord Jesus and realize God has a plan and purpose for what they are going through. One day He will set all things in order. The redeemed, who have trusted solely upon the Lord Jesus Christ and His finished work on Calvary, will one day gather around the Throne of God and worship. They shout,

Worthy is the Lamb who was slain to receive power and riches and wisdom and strength and honor and glory and blessing (Rv 5:12, NKJV).

May we be encouraged by the same.