Home » Research » Contemporary Issues » Earthquakes on the Increase? Or Warning of Judgment to come?

The Great Isaiah Scroll and the Original Bible: An Interview with Dr. Peter Flint

In 1987, as the Dead Sea Scrolls publishing controversy captured the world’s attention, a graduate student by the name of Peter Flint moved from South Africa to the United States. He took a doctoral fellowship at the University of Notre Dame and began to study under one of the figures at the center of the controversy, Eugene Ulrich, the chief editor of the biblical Dead Sea Scrolls.

By 1997, Dr. Peter Flint had published the second largest portion of the biblical Dead Sea Scrolls: the Psalms Scrolls. This publication was full of discoveries that soon changed Bibles, Bible study, and biblical scholarship. Today, Flint is an editor of the largest intact Dead Sea Scroll: The Great Isaiah Scroll.

Since the Great Isaiah Scroll’s discovery in late 1946, an Indiana Jones-like story has followed it. The scroll has journeyed through the heart of war-torn Israel, Palestine and Jordan, through the hands of Bedouins, priests and scholars.

The definitive publication of the scroll is slated to be published in the critically acclaimed Discoveries of the Judean Desert series by the end of 2008. The findings published so far hint that this forthcoming publication will have a massive impact on the way we think of the Bible.

The Great Isaiah Scroll tells the story of how we got our Bible. Because of this, nations and individuals alike have felt connected to the scroll, but very few people have felt as connected to this ancient artifact as Dr. Peter Flint.

Flint took the time to answer some questions for Bible Study Magazine (BibleStudyMagazine.com) about the Great Isaiah Scroll’s impact on Bible study, and what we know about the original Bible.

BSM: What type of work do you do?

BSM: Why are the Dead Sea Scrolls important to the Christian faith? 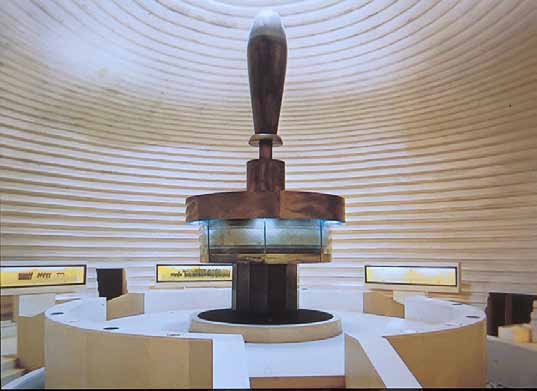 Replica of the actual complete Isaiah scroll found at Qumran in the Dead Sea caves.
This is on display in the Shrine of the Book at the Israeli Museum in Jerusalem.
The actual scroll is in a sealed vault beneath the museum.

BSM: Can you provide some examples of how the Great Isaiah Scroll affects our understanding of the Bible and the Christian faith?

FLINT: Yes. I have a beautiful example from the Isaiah scrolls. Do you remember the suffering servant of the Lord, the man of sorrows? If you go to Isa 53:11, it says, in reference to the servant, “He shall see of the travail of his soul and shall be satisfied. By his knowledge my righteous servant shall justify many. For he shall bear their iniquities.” According to the KJV, which follows the traditional Hebrew text, the servant will suffer, he will die, and he will be content. It’s Good Friday, right?

That is explosive. In that verse we do not only have Good Friday, we have Easter Sunday. Hope, life, resurrection—there it is in the Great Isaiah Scroll. The sermons will have to be repreached, the commentaries will have to be rewritten.

Some might say, “You know what Dr. Flint, just hold on. Maybe ‘He shall see light’ is there because this community thought they were the ‘sons of light.’ Maybe they added it.”

I reply to that by asking, “Is this a good and supported reading?” Well, there are two other scrolls that have this, which would seem to suggest it is.

Imagine your minister saying, “I’ve got good news for you—the scrolls tell us the suffering servant will not only find satisfaction, but ‘will see light.’ ” This reading is based on the oldest copies of the Word of God in the world.

BSM: What do readings like Isaiah 53:11 tell us about the accuracy of the Bible?

FLINT: The Scrolls demonstrate that your Bible is 99% accurate. We are confirming the Word of God and getting to that 1% of readings that are difficult. The NRSV adopts 85 readings like the “He will see light” reading. The NIV has adopted 22. At this early stage, there are about 100 better readings discovered in the Scrolls that have been proposed for English translations. Some of the bibles that adopt these readings are the RSV, RSV and NIV. However, there are some that stick to the traditional Hebrew text, like the KJV. Those translations will not adopt the 1% better readings. 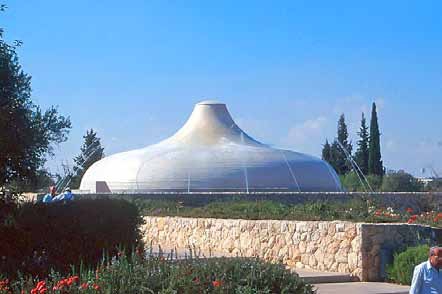 The outside of the Shrine of the Book housing the Isaiah scroll and parts of many other scrolls and fragments. The roof of the Shrine is designed to look like the lid of an actual scroll jar. The roof is continuously sprayed with water to keep the inside cool.

We now are getting the earliest readings of the Word of God. And sometimes, if these readings help, they go back into modern Bible translations. Scholars who love the Scriptures are not easily convinced to make changes.

We don’t want to mess with the Word of God. When we find the earliest readings that clear up problems, or contain better readings, they become strong contenders for a modern Bible.

The addition of that one word in Isa 53:11 is the subject of an entire sermon. Just a word can make all the difference. Verses like Isa 53:11 are faith-affirming and encouraging.

BSM: We all have our favorite books in the Bible. What books are the favorites of the Dead Sea Scrolls community?

You can imagine why they loved the book of Psalms. The psalms are about worship. It was the hymnbook of the second temple period (516 BC–70 AD). In the Dead Sea Scrolls and in the New Testament, many psalms are interpreted to be about the Messiah. For instance, Psa 22:1, “My God, my God, why have you forsaken me?” is quoted by Jesus on the cross.

Why was Isaiah so popular at Qumran and in the New Testament? In Luke 4, Jesus opens the scroll of the prophet Isaiah and reads, “The Spirit of the Lord is upon me, because he has anointed me to proclaim good news to the poor. He has sent me to proclaim liberty to the captives and recovering of sight to the blind, to set at liberty those who are oppressed, to proclaim the year of the Lord’s favor” (Luke 4:18–19, ESV).

Isaiah was an important book in the New Testament because the early Christians believed it was about the Messiah. Both communities loved the book of Isaiah and believed it was a prophecy pointing to their own time. Qumran caves where the scroll was found in 1946 by a Bedouin shepherd boy. And an authentic scroll jar on display in a museum.

BSM: Why are the Dead Sea Scrolls important to Bible study?

BSM: How can someone incorporate the Dead Sea Scrolls into their study of the Bible?

FLINT: First, go through a brief introduction to the Dead Sea Scrolls. Then, take a book like Isaiah and say, “This is a wonderful book. Now, why was it so important to the early church and the people of the Dead Sea Scrolls?” The answer is: Because they interpret it to prophesy about the Messiah’s suffering and redemption. Next, take readings like Isa 53:11 and say, “This is what we had before the Scrolls and this is what we have now.” Many modern Bibles are restoring Scripture as originally given.

Essentially, anyone who does this is saying, “Look here, this is confirmed. But, have a look here—there’s a problem reading. With the Scrolls, we’ve solved the problem.”

Before the Scrolls, if you encountered a problem reading some smarty-pants person would say, “Well, you know, maybe God left it out.” Now we can go to the Scrolls and say, “I have the original. There’s the solution to the problem.”

We have certain readings now which are different, but they’re not new readings, they’re old readings that are just now being discovered.

In Isaiah 53:11 “we do not only have Good Friday, we have Easter Sunday. Hope, life, resurrection—there it is in the Great Isaiah Scroll.”

BSM: What does the Great Isaiah Scroll tell us about how we got our Bible?

FLINT: The Great Isaiah Scroll gives us some insight into how the book of Isaiah was finalized.

Many scholastic studies tell us that the book of Isaiah was divided into two parts: First Isaiah by Isaiah of Jerusalem (chapters 1–39) and Second Isaiah by a writer living after the Hebrews returned from captivity in Babylon (chapters 40–66). As a reaction to these kinds of studies, many people ask the question, “Is there a division in the Great Isaiah Scroll between chapters 1–39 and chapters 40–66?” And the answer is: No. There is no division at that point.

However, what is very interesting is that the Great Isaiah Scroll is neatly divided into two parts: chapters 1–33 and chapters 34–66. Some scholars are now beginning to think, “Maybe the original division of Isaiah was between chapters 33 and 34.”

BSM: Above all, what do you want people to understand about the Great Isaiah Scroll?

FLINT: The Great Isaiah Scroll, and all the Dead Sea Scrolls, are faith-affirming, life-giving, and historically accurate.

Note: Nineteen copies of Isaiah have been found among the Dead Sea Scrolls and five commentaries, known as pesharim, on Isaiah.