Nebo who? You mean you don't remember Nebo-Sarsekim? No wonder, because if you consult your concordance, you will find that he is referred to but once in the Old Testament...

This article was first published in the Summer 2007 issue of Bible and Spade.

Nebo who? You mean you don't remember Nebo-Sarsekim? No wonder, because if you consult your concordance, you will find that he is referred to but once in the Old Testament. Nebo-Sarsekim was a high Babylonian official named in Jeremiah 39:3. The mention of this individual in the Hebrew Bible is yet another example of an obscure 'factoid' which demonstrates the historical accuracy and eyewitness nature of the Biblical record.

The time was the ninth day of the fourth month of the 11th year of the reign of Zedekiah (Jer 39:2), i.e., July 18, 587 BC. The place was Jerusalem. The event was the fall of Jerusalem and the Southern Kingdom of Judah to the Babylonians under Nebuchadnezzar after a siege of two and a half years, a very sad time in the history of God's people. After the city wall was broken through,all the officials of the king of Babylon came and took seats in the Middle Gate: Nergal-Sharezer of Samgar, Nebo-Sarsekim a chief officer, Nergal-Sharezer a high official and all the other officials of the king of Babylon (Jer 39:3). 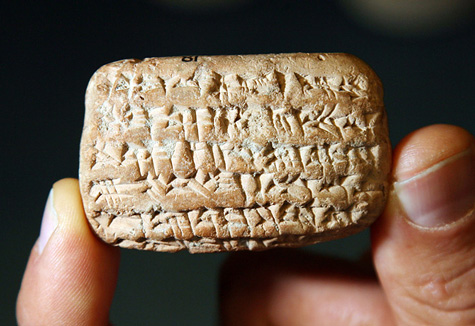 The tablet mentioning Nebo-Sarsekim was found in Sippar, an ancient Babylonian city 20 mi (32 km) southwest of modern Baghdad and 35 mi (57 km) north of Babylon. In the late 19th century, tens of thousands of cuneiform tablets were recovered from the site and brought to the British Museum (Gasche and Janssen 1997). Later, in 1920, the Nebo-Sarsekim tablet, only 2.13 in (5.5 cm) wide, from the same site, was acquired by the museum. Credit: Ian Jones/Telegraph

Michael Jursa, associate professor at the University of Vienna, made the discovery. Since 1991, he has been sifting through the approximately 130,000 inscribed tablets at the British Museum to ferret out data on Babylonian officials. On July 5, 2007, just another day in the tablet room, Jursa made the find of a lifetime when he discovered the Biblical name (Reynolds 2007). The tablet is so well preserved that it took him only minutes to decipher (Alberge 2007). It was a mundane receipt acknowledging Nebo-Sarsekim's payment of 1.7 lb (0.75 kg) of gold to a temple in Babylon. Dated to the tenth year of Nebuchadnezzar (595 BC), eight years before the fall of Jerusalem, the tablet reads in full:

[Regarding] 1.5 minas [0.75 kg] of gold, the property of Nabu-sharrussu-ukin, the chief eunuch, which he sent via Arad-Banitu the eunuch to [the temple] Esangila: Arad-Banitu has delivered [it] to Esangila. In the presence of Bel-usat, son of Alpaya, the royal bodyguard, [and of ] Nadin, son of Marduk-zer-ibni, Month XI, day 18, year 10 [of] Nebuchadnezzar, king of Babylon (Reynolds 2007).

The Hebrew spelling of the name is slightly different from the cuneiform, but there is no question that it is the same person. Although the NIV translates Nebo-Sarsekim's title as 'chief officer,' the literal translation is 'chief eunuch,' exactly the same as in the tablet.

Reflecting on his discovery, Jursa commented, 'It is very exciting and very surprising. Finding something like this tablet, where we see a person named in the Bible making an everyday payment to the temple in Babylon and quoting the exact date is quite extraordinary' (Alberge 2007). Irving Finkel, Assistant Keeper in the Department of the Middle East at the British Museum, stated,

This is a fantastic discovery, a world-class find. If Nebo-Sarsekim existed, which other lesser figures in the Old Testament existed? A throwaway detail in the Old Testament turns out to be accurate and true. I think that it means that the whole of the narrative [of Jeremiah] takes on a new kind of power' (Reynolds 2007).

This is not the first archaeological discovery relating to the fall of Jerusalem. Nebuchadnezzar, king of Babylon at the time and leader of the invading force, is well known to us. His palace has been excavated in Babylon and many of his records recovered (Wiseman 1985; Klengel-Brandt 1997: 252-54). One such record, the Babylonian Chronicle for the years 605-595 BC, describes the fall of Jerusalem to Nebuchadnezzar in 597 BC, the so-called 'second deportation,' the first being in 605 BC when Daniel and his companions were taken to Babylon (Dan 1:1-5). The tablet was found in Babylon and purchased by the British Museum in the 19th century. The section pertaining to the fall of Jerusalem reads,

Year 7 [597 BC] in Kislev the king of Babylonia [Nebuchadnezzar] called out his army and marched to Hattu [the west]. He set his camp against the city of Judah and on the second Adar [March 16] he took the city and captured the king [Jehoiachin]. He appointed a king of his choosing there [Zedekiah], took heavy tribute and returned to Babylon (Millard 1997: 468). 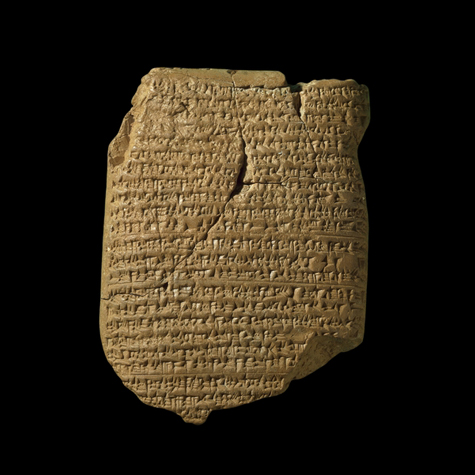 Babylonian Chronicle for the year 605-595 BC. First published by Donald J. Wiseman in 1956, it records the last (21st) year of the reign of Nabopolassar and the first 11 years of his son Nebuchadnezzar. Among Nebuchadnezzar's accomplishments was the capture of Jerusalem, dated precisely to March 16, 597 BC. The document is on display in the British Museum, London. Credit: Michael Luddeni

The Bible describes the same events in some detail. When Nebuchadnezzar besieged and captured Jerusalem in 597 BC, Jehoiachin was on the throne. He took Jehoiachin, the royal family and important men in the kingdom to Babylon. He then placed Jehoiachin's uncle, Mattaniah, on Judah's throne and changed his name to Zedekiah (2 Kgs 24:11-17). Jehoiachin was a young man of 18 when he became king of Judah. He reigned but three months before being carried off to Babylon, where he lived out the rest of his days (2 Kgs 24:8, 12, 15; 25:27-30). Four tablets found in Nebuchadnezzar's palace name Jehoiachin and his family as among those who were receiving rations from the king (Weidner 1939; Wiseman 1985: 81-82). 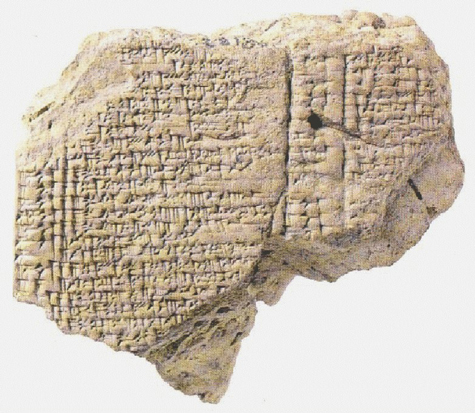 Ration record from Babylon mentioning Jehoiachin. During Robert Koldeway's excavations at Babylon at the turn of the 20th century, he discovered what archaeologists call the 'Northern Palace,' most likely the royal residence of King Nebuchadnezzar. Koldeway found there a number of cuneiform-inscribed clay tablets dating to the years 594-569 BC. They list kings captured from throughout the ancient Near East who were living in the palace and receiving rations of grain and oil from the king. Four of the tablets list rations for 'Jehoiachin, king of Judah' and his family. These tablets are today in the Pergamum Museum, Berlin. Credit: Walter Pasedag

In his campaign against Jerusalem in 589-587 BC, Nebuchadnezzar laid waste all the fortified cities of Judah. While Jerusalem was being besieged, Jeremiah delivered a message to king Zedekiah concerning the fate that awaited him (Jer 34:1-7). The passage ends with the statement that the only fortified cities that were still holding out, apart from Jerusalem, were Lachish and Azekah (Jer 34:7). A group of 21 letters found at the site of Lachish date from this time period. They appear to be military communiqués sent to the military commander at Lachish from another outpost. The final words of Letter 4 echo those of Jeremiah 34:7: 'we are watching the [fire] signals of Lachish…for we cannot see Azekah' (Pardee 2002: 80).

Lachish Letters 1 (left) and 2 (right), on display in the British Museum, London. A British expedition to Lachish under the direction of James Starkey in the 1930s discovered 21 letters in a chamber of the city gate written on flat, broken pieces of pottery (ostraca). The stratum where they were found and the shape of the script indicates that they date to the time of the Babylonian invasion of Judah, 589-587 BC. Their content reflects the turmoil that was taking place in Judah at that time. Credit: Michael Luddeni

Another official named in Jeremiah 39:3 is also known from cuneiform sources as ­Nergal-Sharezer. Jeremiah 39:13-14 goes on to say that he was instrumental in releasing Jeremiah from the Courtyard of the Guard where he was being held as prisoner. Nergal-Sharezer was married to Nebuchadnezzar's daughter Kashshaia and later became king of Babylon (559-556 BC), the Neriglissar of the classical sources (Wiseman 1985: 10-12; Leick 1999: 122).

Nebuchadnezzar gave Nebuzaradan specific instructions to deal kindly with Jeremiah (Jer 39:11-12). He released Jeremiah and gave him a choice of either going to Babylon or remaining in Judah (Jer 40:2-4). Jeremiah chose to remain in Judah, and joined the newly appointed Judean leader Gedaliah at Mizpah (Jer 39:14; 40:5-6). Five years later, Nebuzaradan returned to Jerusalem and deported another 745 people to Babylon (Jer 52:30). A clay prism found in Nebuchadnezzar's palace, dating to ca. 570 BC, contains a list of court officials. Among them is Nebuzaradan, with the title 'Chancellor' or 'Chief Baker' (Wiseman 1985: 73-75).

We sometimes wonder why such mundane details as the names of Babylonian officials are recoded in God's word. Yet, it is these seemingly insignificant bits of information that demonstrate the historical accuracy of the Biblical text and how that accuracy has been preserved through the centuries.

Leick, Gwendolyn
1999 Who's Who in the Ancient Near East. New York: Routledge.