The Place of Textual Updating in an Inerrant View of Scripture: Part One

INERRANCY, INSPIRATION AND THE OT CANON: THE PLACE OF TEXTUAL UPDATING IN AN INERRANT VIEW OF SCRIPTURE. For good reason, there are often strong emotions attached to the issues of inspiration, inerrancy, the autographa, and the canon. This article does not seek to overturn a conservative or evangelical understanding of the biblical doctrine of inspiration and inerrancy. I wholeheartedly endorse the commonly held evangelical view of both theological concepts and do not question that God superintended the entire process of inscripturation with the result that the OT Scriptures were God-breathed. Those Scriptures are without error, infallible, and fully reliable.

The article proposes a biblically based idea that fits within a firm and enthusiastic belief in inspiration and inerrancy. I seek to show that some commonly used definitions of key terms, especially 'autographa' and 'canonicity,' are defined primarily from a NT perspective and do not give sufficient attention to some of the realities of the OT text. Thus minor adjustments must be made in how scholars articulate various aspects of the doctrine of Scripture.

After laying a brief theological foundation and drawing attention to some features unique to the OT that figure into understanding the process of its inscripturation, the present article delineates some issues related to the concept of textual updating and examines several possible examples of inspired textual updating. After considering some ways in which evangelicals relate this idea of textual updating to a belief in inerrancy, I will survey several past and present proponents of the view proposed here. Finally, the paper will address a few of the objections that have been or could be raised against this proposal.

Millard Erickson defines inspiration as 'that supernatural influence of the Holy Spirit upon the Scripture writers which rendered their writings an accurate record of the revelation or which resulted in what they wrote actually being the Word of God.' 1

The apostle Paul affirmed that 'all Scripture is given by inspiration of God' (2 Tim 3:16), and Peter wrote that 'prophecy never came by the will of man, but holy men of God spoke as they were moved by the Holy Spirit' (2 Pet 1:21). The 'inspiration' or 'spiration' of the Scriptures, that is, the fact that they are God-breathed, emphasizes 'the divine source and initiative rather than human genius or creativity.' 2 God's involvement in the process of inscripturation, that period of time in which the entirety of the Scriptures came into being, demonstrates that those Scriptures ultimately come from him.

While inspiration primarily concerns the quality of the finished product rather than the process of inscripturation, the divine-human authorship of the Scriptures raises the tension as to how those Scriptures came into being. Most scholars contend that the Holy Spirit superintended the biblical writers throughout the process of inscripturation. Whether it concerns a biblical book or books whose author is stated (like the Pentateuch) or a book or books that went through a longer period of composition and could have involved more than one writer (like Samuel, Kings, and the Psalms), the reality of the biblical doctrine of inspiration guarantees the accuracy and infallibility of the biblical book until it reaches its final stage of composition.

Building on the concept of inspiration, the Chicago Statement on Biblical Inerrancy states: 'We affirm that inspiration, strictly speaking, applies only to the autographic text of Scripture.' 3 This brings up the question, 'What constitutes an autograph or the autographa?' In general, scholars use the term 'autographa' to refer to the first or original copies of the biblical documents, that is, the material that the author actually wrote himself. 4

Its basic definition normally connotes the idea of the original writing of a biblical book. According to the customary definition in theological discussions, 'autographa' refers to an unchanging form of text whereby the original document is identical to the final canonical form of a given OT biblical book. In light of this understanding of the concept of the 'autographa' and owing to the significant role it plays in the inerrancy debate, the writings designated as autographa would not seem capable of being in flux or susceptible to change. The 'canon' of Scripture involves 'the list of all the books that belong in the Bible' 5 or 'the list of books that are reckoned as Holy Scriptures . . . reckoned as supremely authoritative for belief and conduct.' 6 Theologically, inspiration serves as the foundation for the canonicity of a biblical book. In other words, God's activity determines canonicity. As E. J. Young points out, 'That which determines the canonicity of a book, therefore, is the fact that the book is inspired of God. Hence a distinction is properly made between the authority which the OT books possess as divinely inspired, and the recognition of that authority on the part of Israel.' 7 Practically, God's people recognized this canonicity primarily by virtue of the identity of the prophetic spokesman through whom the book was given. 8 Once a book was recognized as canonical, God's people sought to safeguard that portion of sacred Scripture. During the thousand years or so of OT compositional history a number of written works-22 or 24 according to the Jewish canon and 39 books according to the Protestant canon-gained canonical status.

II. Some Unique Features of the OT Canon

Unlike the NT books which were composed and compiled over approximately a sixty-year period, the books of the OT canon were composed and compiled during a period of about a thousand years, assuming an early date for the Exodus and the close of the canon around 400 BC. During that millennium, there were multitudes of linguistic, cultural, and geographic changes, to name only a few. The potential for various significant changes of this kind gives rise to the question, 'Did this long compositional history and the many changes in the world of the Bible impact the process of completion of the OT canon?'

In the following discussion I contend that the time span between the initial composition of certain biblical books and the close of the OT canon occasioned the need for various editorial revisions, although on a relatively small scale. The relationship between textual updating and inspiration and canonicity may be summarized in five propositions:

1. The customary concept of the OT canon is locked in too tightly with the original or initial form of a biblical book. In light of the various editorial revisions that seem to be present in the text of the OT (see the survey in Part Two), I suggest that we differentiate between the preliminary and final canonical form of a biblical book. 9 By the word 'preliminary,' I am not suggesting a deficient or lacking canonical form, but a canonical status that has not yet been finalized. During the entire period in which God was giving his Word to mankind, the people of God regarded a given biblical book as canonical (see figure #1 below). In other words, throughout the composition history of the OT, the God-breathed nature of each biblical book gave that book canonical status in the eyes of the believing community.

2. In light of the doctrine of biblical inspiration, God guarantees the accuracy of everything involved in the process of inscripturation. I picture inscripturation as the umbrella that describes the whole process by which God provided his Word through his prophetic spokesmen. This paper seeks to show that the initial composition of a biblical book and any editorial revisions of a biblical book before the finalization of the OT canon are part of God-breathed Scripture (see figure 1 below). Their inerrancy, canonicity, and 'autograph-like' status derive entirely from divine inspiration.

3. In light of the unchanging nature of the autographa (according to standard theological definitions), I prefer to reserve the term 'autographa' (which refers to the 'original' writing according to its basic definition) in the technical sense for the final form of the OT Scriptures, the text-form transmitted by the scribes (after the close of the OT canon) without any divinely endorsed content changes.

4. The close of the OT canon, that is, the time when no more biblical books were being composed and God's revelation of his will for humanity had ceased (as it relates to the OT) functions as the dividing line between inspired editorial activity and uninspired scribal activity (see figure 2). Modernizations, explanatory glosses, and any similar phenomena can be described as inspired editorial activity only if they are part of the compositional history of the OT, that is, before the close of the OT canon. In other words, editorial updating that took place prior to the close of the canon belongs to the process of inscripturation and is part of the inspired, inerrant text of Scripture. Any updating that takes place after that juncture belongs to the domain of textual criticism and represents a variant from the autographa.

5. In light of the fact that recognition of canonicity is integrally connected to prophetic authorship, my assumption is that only recognized individuals, that is, prophetic figures whose adjustment of the biblical text would have been accepted by the Israelite community of faith, would have been able to participate in this 'updating' process.

Here is the essential refinement proposed by this paper. Within the canonical process, and subsequent to the initial writing of a biblical book or books, a God-chosen individual or prophetic figure under the superintendence of the Holy Spirit could adjust, revise, or update pre-existing biblical material in order to make a given Scripture passage understandable to succeeding generations. Those revisions, which occurred within the compositional history of the OT, are also inspired and inerrant. 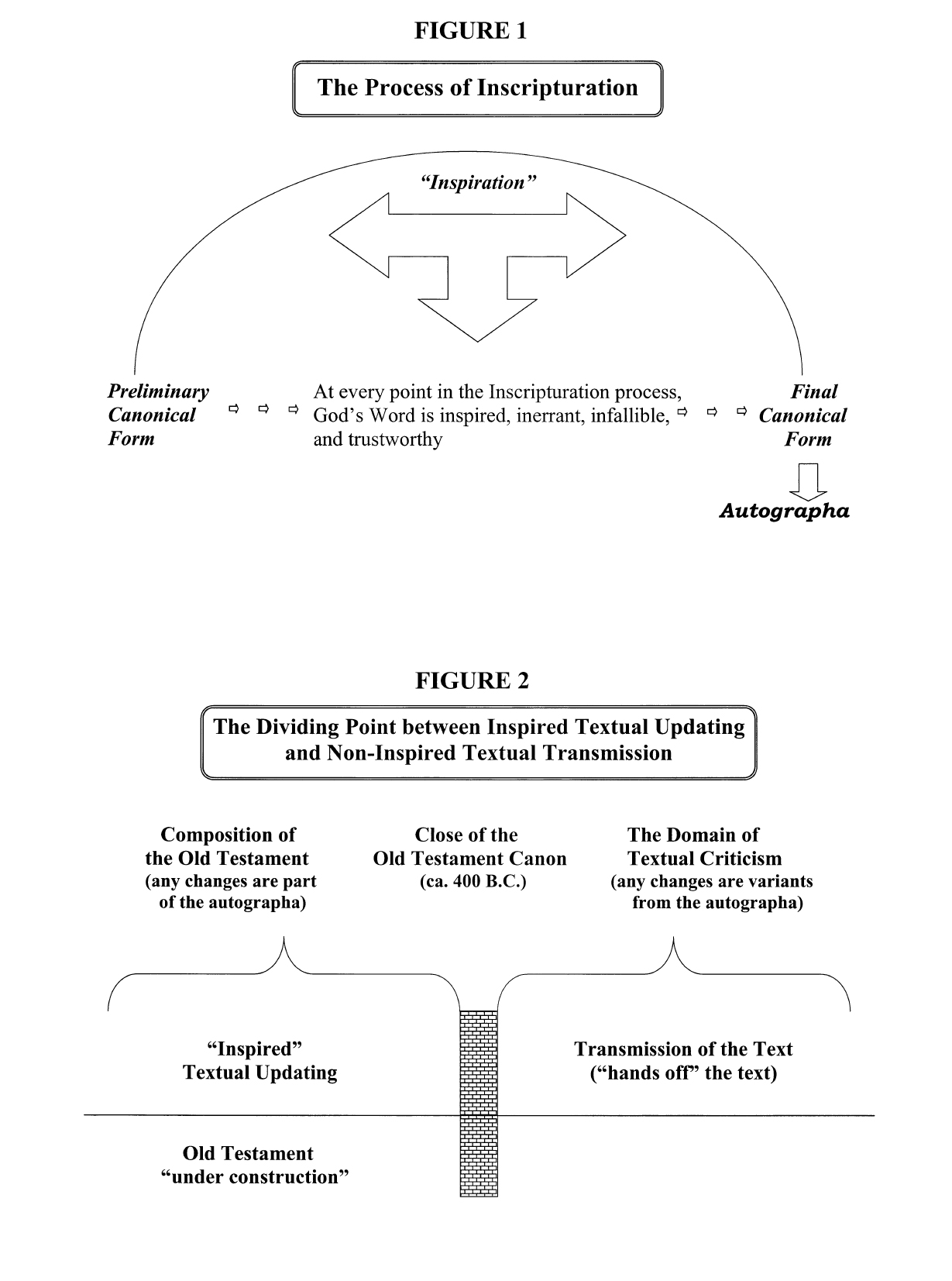 In Part Two, we will examine possible examples of inspired, textual updating. 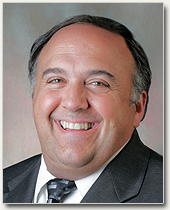 Michael Grisanti is Professor of Old Testament at The Master's Seminary where his scholarly interests include Deuteronomy, Old Testament theology, biblical ethics, the prophets, and the history of Israel. He has been actively involved in ministries around the world, which have brought him to Colombia, Honduras, Albania, France, Israel, Italy, Japan, Jordan, Russia, and Ukraine. For several years, he taught at Central Baptist Theological Seminary.

1. Millard Erickson, Christian Theology (Grand Rapids: Baker, 1983) 199. Charles Hodge affirms that inspiration was 'an influence of the Holy Spirit on the minds of certain select men, which rendered them the organs of God for the infallible communication of His mind and will. They were in such a sense the organs of God that what they said, God said' (Systematic Theology [New York: Scribner, Armstrong, and Co., 1872] 1:154). B. B. Warfield proposed that 'the Bible is the Word of God in such a sense that its words, though written by men and bearing indelibly impressed upon them the marks of their human origin, were written, nevertheless, under such an influence of the Holy Ghost as to be also the words of God, the adequate expression of His mind and will. It has always recognized that this conception of co-authorship implies that the Spirit's superintendence extends to the choice of the words used by the human authors (verbal inspiration), and preserves its product from everything inconsistent with a divine authorship-thus securing, among other things, that entire truthfulness which is everywhere presupposed in and asserted for Scripture by the Biblical writers (inerrancy)' (The Inspiration and Authority of the Bible [ed. S. Craig; Philadelphia: Presbyterian & Reformed, 1948] 173).

8. This is the primary criterion identified by R. Laird Harris, Inspiration and Canonicity of the Scriptures (Greenville, SC: A Press, 1995) 154-77. F. F. Bruce (The Canon of Scripture [Downers Grove, IL: InterVarsity, 1988] 255-69) and N. Geisler and W. Nix ( A General Introduction to the Bible: Revised and Expanded [Chicago: Moody, 1986] 221-34) offer other criteria for recognizing a given book's canonicity. Return to text.