Home » Research » Contemporary Issues » Would the Apostle Paul Have Burned A Copy of the Koran?

Review of the 'Unsolved Mystery of Noah's Ark' 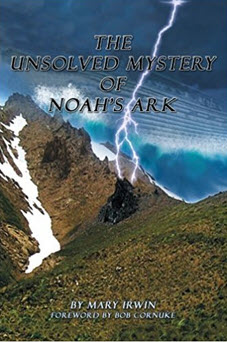 Gordon Franz and Bill Crouse provide a review of the recent book, 'The Unsolved Mystery of Noah's Ark' by Mary Irwin.

Mary Irwin, the wife of the late moon-walking astronaut, Jim Irwin, has written a book about their adventures on Mount Ararat and the search for Noah's Ark. This book was prompted by a deceptive National Geographic special on Noah's Ark in May 2009.

In the foreword, Bob Cornuke, another Ark hunter, laments that he has been searching for Noah's Ark for 25 years and has never seen the old boat, and then asks: but has anyone ever seen the remains of Noah's Ark? (page xi). We are pleased to report that over the millennia, literally thousands, upon thousands of people, including an Assyrian king, have made pilgrimages to Noah's Ark and seen it, brought back wood from it as souvenirs or as objects of worship. We were surprised that Mary Irwin did not cite our definitive and compelling article on the true location for the landing of Noah's Ark on Cudi Dagh in southeastern Turkey. It was published in the Fall 2006 issue of Bible and Spade (Vol. 10, no. 4, pp. 99-113). (PDF download).

Early in the book Irwin writes about her first trip to the famed mountain, known by the Turks as Agri Dagh, with her husband in the early 80's, an account that will bring back many memories to the various teams of climbers that had high hopes of finding Noah's Ark. She then begins what is the best part of the book where she debunks several of the more notorious claims about the whereabouts of the Ark. Here she demonstrates evidence of pretty good detective work as far as she goes. Those making the remarkable claims which she exposes are: Ferdinand Navarra, George Green, George Hagopian, and Ron Wyatt. We commend her for her efforts to set the record straight.

In the Part two, she sets about to examine the off-probed story of the late Ed Davis from Albuquerque, NM. This is the story of a WWII soldier stationed in Hamadan, Iran, who claimed he had a close encounter, both with Noah's Ark and the Garden of Eden. We wish that she had applied her skill evidenced earlier in the book to these sensational claims.

We agree with Mary Irwin's assessment in the first half of the book (pages 1-49) that there are no credible sightings of Noah's Ark on Agri Dagh, the traditional Mount Ararat. However, her case in the second half of the book for Mount Suleiman, northwest of Tehran, based on the Ed Davis testimony strains credulity. This idea was first espoused by Robert Cornuke, and is weak and unconvincing. First of all, the biblically designated mountains of Ararat do not extend anywhere near this mountain in Eastern Iran. It has no tradition whatsoever, and one must have quite the imagination to even consider that the claimed rock formation was once the mighty ship of Noah (here are the co-ordinates: 36 degrees, 24'14.18N; 50 degrees, 58'27.43E). Thorough refutations of Bob Cornuke's ideas and articles have been published previously (A Review of 'The Search for Noah's Ark') and (Did the BASE Institute Discover Noah's Ark in Iran?) Mr. Cornuke has never responded to these articles and Mary Irwin apparently did not interact with the material in our critiques, and thus repeated the errors pointed out in the articles.

In the book, Irwin contends that Ed Davis passed several lie detector tests (page 53) and one was 'grueling' (page 54). The facts are not exactly as stated. Ed Davis, in one lie detector test of which we are aware, done on May 1, 1988 for Bob Cornuke and High Flight Foundation (Jim Irwin's organization), by P. G. P. Polygraph, was asked six softball questions, and the final question was answered by Davis in the negative, but showed stress on the polygraph test. Apparently, he had talked with others, or read books, about the ark. The author should have been aware of the results of this polygraph test because her husband was still in charge of the High Flight Foundation and the letter should have been in her 'Ararat' file. If other tests were administered, it sure would strengthen her case if these results would have been documented in the book.

The first map is found on page 95. It is labeled Ancient Map of the Middle East, by Jewish Historian Petras Plantius. This map is primitive, and in some cases highly inaccurate. A careful examination of the map will show that the mountains labeled Ararat mons are the Gordyan Mountains in southeastern Turkey and not Iran. Just below the Ararat mons are the cities of Nineve, Mosul, and Arbela, all cities in northern Mesopotamia (modern day Iraq), and not Iran. The range of mountains to the right of Ararat mons, running in a north-south direction, is the Zagros Mountains, even though they are mislabeled Caspy (?) montes (Caspian Mountains). One can tell they are the Zagros Mountains by the location of Elam and Susa at the southern end of the mountain range. These locations are to the southeast of the Zagros Mountains. On this map, the Ararat Mons is in Turkey, not Iran. This map would be better used for the case of Cudi Dagh as the true landing site of Noah's Ark!

The second map is found on page 99. It is identified in the book as a Terrestrial Paradise, circa 1722 showing Noah's Ark below the Caspian Sea on the Summit of Mont Ararat. This map is Pierre Daniel Huet's conception from Calmet's Dictionnaire historique de la Bible (1722). With this map she is trying to demonstrate that the landing site for Noah's Ark is below (or near) the Caspian Sea, just as Mount Suleiman, near Tehran, is near the Caspian Sea. This is very misleading. The map is not to scale and is an idealized map. Fortunately, one can locate where this mountain is by a careful examination of the map. Just below the mountain is a city named Ecbatana. The ancient city of Ecbatana is buried underneath the modern Iranian city of Hamadan.

Ecbatana is mentioned once in the Bible in Ezra 6:2 (see the margin of any good study Bible) as the capital of the province of Media. It is also possible that it was one of the 'cities of the Medes to which Israelite captives were exiled by the Assyrians after the fall of Samaria (2 Kings 17:6). Interestingly, the mapmaker places Mount Ararat in the Land of Media and not in Armenia. This should have raised red flags because this is contrary to our biblical compass. The ancient biblical and historical sources clearly show that Mt. Suleiman, north of Tehran, was deep inside the land of Media and far outside the land of Ararat / Urartu where the Ark landed.

The mapmaker was trying to convey that the Ark landed on a mountain near Ecbatana, but not, on Mount Suleiman some 250 km to the northeast of Hamadan. There are Luristan traditions that Noah's Ark landed in the area of Hamadan. Major Rawlinson, a British Army officer, visited the area in 1836 and mentions the tradition of the landing on a very lofty range, (co-ordinates: 34 degrees, 02'02.39N; 47 degrees, 37'01.85E) called Sar Kasti on page 100 in his article in the Journal of the Royal Geographical Society of London 9 (1839) 26-116. It was to this mountain that Cornuke made his first solo trip and the first of three claims that the Ark came to rest inside Iran. See: Cornuke and Halbrook, The Lost Mountains of Noah: The Discovery of the Real Mtns of Ararat, (2001) pages 88-95.

We were both a little amused that she advocated the Karola Kautz's theory that the Mount of Salvation (Mount Nisir) was the landing place of the Babylonian ark! Kautz advocates the Babylonian account of Mount Nisir which is what Irwin was upset about when she watched the National Geographic program on Noah's Ark (pages 1 and 2)!!!!!

In Chapter Ten, Irwin borrows another argument from Cornuke she believes indicates that the ark landed in Eastern Iran. Genesis 11:1-2 says: And the whole earth was of one language, and of one speech. And it came to pass, as they journeyed from the east, that they found a plain in the land of Shinar; and they dwelt there (KJV). The argument goes like this: If you translate the Hebrew miqqedem mdqm as: from the east, as the KJV does, it would clearly seem to indicate that the Ark must have landed somewhere to the east of historic Shinar (Mesopotamia), in modern-day Iran since it is that country that is directly east of Shinar. However, if you translate the miqqedem as eastward, as the NIV does, then you have the migration coming from the west toward Shinar. Elsewhere the miqqedem is translated in the east (NEB), that is: men moved in the east, then, the directional point is much more indefinite.

Given that this migration occurred several hundred years after the disembarking from the Ark from the previous context of Genesis chapter 10, it seems best not to push this passage too much. If one believes the Ark landed in northern Iran, or northeast Turkey, it would have certainly been more accurate for the writer to say they migrated from the north. Neither the Elburz Mountains, nor Mount Ararat is directly east of Shinar. The biblical mountains of Ararat (Urartu) are directly north of the plain of Shinar.

The apparent conflict between Genesis 8:4 and 11:2 is more easily resolved with a more indefinite interpretation in our opinion. It should be pointed out that that there is least a 100-300 year period between the landing of the Ark after the Flood (Gen. 8), and the Tower of Babel event (Gen. 11). The peoples could have easily moved from where the Ark landed to other locations east or west of Shinar [Babylonia] before the Tower of Babel incident took place.

Finally we would caution the author about advocating the Mount Sulieman discovery based on unpublished reports of petrified wood with marine fossils, etc (pages 105-109). From the book: 'Until someone comes home from an expedition, with authentic photographs or a large chunk of the ark's remains verified by authentic scientists who have looked at the samples through an electron microscope and have carbon dated the piece, I shall continue to be suspect of anymore 'eye-witness' accounts…' Cornuke's team, who originally made these claims in 2006 has never produced any of the above for peer review. It's been more than six years! If the answer is negative, those results should also be published, so people do not go around writing books and giving lectures that they found Noah's Ark on Mount Suleiman, northwest of Tehran!

Page 43. 1st line. Wyatt was not a psychiatric nurse, but rather a nurse anesthetist.

Page 43. 2nd to the last line. The tunnel was in the Garden Tomb area, not the Garden of Gethsemane

Page 69. 3rd line. Josephus is the 2nd half of the 1st century AD, not the beginning of the 4th century AD.

Page 74. The quote attributed to Ashur-nasipal was not made by him and not cited as a quote by Olmstead.

Page 78. The Harmonics footnote does not appear in the bibliography.