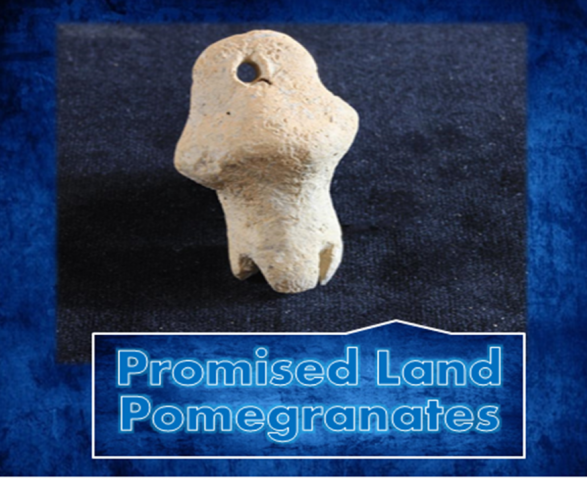 The Associates for Biblical Research (ABR), under my supervision, just completed Season Three of a multi-year expedition at Shiloh, the site of Israel's first capitol and the epicenter of the fledgling nation's cultic system. This season yielded many important finds: altar horn, possible postern gate, bullae and scarabs, large structure from the tabernacle period, etc. Friends often ask me to name the most important discovery from our first three seasons of excavation. While there are many important finds, one stands out from the rest.

In June 2018, Shiloh Square Supervisor Tim Lopez excavated a ceramic pomegranate near a large East/West wall dating to Iron Age I, a period when the tabernacle was in operation at Shiloh. We now believe that this is part of a massive building from the time of Samuel. This, of course, matters because the tabernacle, and later the temple, oriented East-West. This is the first East-West wall from Iron Age I to emerge from the three expeditions to Shiloh over the past century. Between 1922-1932, the Danish excavated four seasons and again in 1963. Bar Ilan University dug from 1981-1984 under the direction of Israel Finkelstein. Shortly after the ABR pomegranate came to light, we searched the final publications of the Danish and Israeli excavations. Our research revealed that the Danish excavation also recovered a ceramic pomegranate, but they misidentified it as a stopper, an understandable oversight since the calyx (flowered petals) of the pomegranate was missing. Tim and I partnered with Ariel University professor David Ben-Shlomo to publish these two important artifacts in Judea and Samaria Research Studies, an Israeli peer-reviewed journal, in June 2019. This rekindled the media interest that was generated by ABR's original press release in October 2018. Christianity Today included the Shiloh pomegranate(s) on their list of the Top 10 Biblical Archaeology finds of 2018.

The grapes of Eschol often epitomize the fruitfulness of the Promised Land, but the pomegranate more clearly symbolizes Israel's new Eden. The Bible mentions pomegranates 15 times. The first mention reveals the sacred status of this fruit: Make pomegranates of blue, purple, and scarlet yarn around the hem of the robe, with gold bells between them (Ex 28:33). This verse describes the garment of the high priest. The bells were utilitarian, signaling the entrance of the high priest into the Holy Place so that he will not die (Ex 28:35). Clearly, unannounced mediaries risked death. The significance of the pomegranate lies in its rich symbolism. It represents fecundity (potential for fertility) and God's abundant provision. With effort one could count the number of seeds in a pomegranate, but it is impossible to count the number of pomegranates in a seed.

Before the Israelites entered the Promised Land, Moses described the lands horticultural potential: a land of wheat and barley, vines, and fig trees, pomegranates, olive oil, and honey (Deut 8:8). The vines likely refer to grape vines, and the honey probably refers to date honey, a thick sap derived from crushing dates. Assuming that this is correct, Moses' list of products includes five fruits: grapes, figs, olives, dates, and pomegranates. Of these fruits or their by-products, only the pomegranate qualified as a revered fruit which transcended secular and sacred boundaries and represented Gods nature to his people. But, why did God find such pleasure in the pomegranate and instruct that it should be in his presence? Numerous sources claim that all pomegranates have 613 seeds, but others dispute this assertion. If the claim is true, perhaps these seeds represent the 613 laws in the Hebrew Bible. A more certain explanation would be the fecundity symbolism. All ancient religions were fertility based, including the Israelite's monotheistic worship of Yahweh. The five pomegranate mentions in the sensual love poetry of the Song of Solomon (e.g. 8:1-2) support this idea. The sensual connotations of Song of Solomon 8:1-2 are clear:

If only you were to me like a brother,
who was nursed at my mother's breasts!
Then, if I found you outside,
I would kiss you,
and no one would despise me.
I would lead you
and bring you to my mother's house
she who has taught me.
I would give you spiced wine to drink,
the nectar of my pomegranates.

From the wilderness to Shiloh to Gibeon, the tabernacle functions for almost five centuries until Solomon builds the first temple (1 Ki 6:1). Although the tabernacle eventually ceased operation, the pomegranate continued to represent God to his people as evidenced by the one-hundred pomegranate shaped ornaments that adorned the pillars in Solomon's temple (2 Chron 3:16). God created roughly 2,000 different fruits, from apple to yuzu. Biblical writers connect no fruit, besides the pomegranate, with God's presence. This raises questions in my mind. Was the pomegranate the forbidden fruit in the Garden of Eden, or even the fruit of the Tree of Life? Was pomegranate wine the sacred nectar for occasions such as Passover, or was it the more traditional grape byproduct?

Interestingly, the Israelites were not unique in their veneration of the pomegranate. Many Ancient Near Eastern cultures also invested a special significance in the pomegranate. Perhaps the best-known parallel is the Greek myth of Persephone, Demeter's daughter. Hades sequesters the young and beautiful Persephone in the underworld, without her permission. At Demeter's request, Zeus sends Hermes (messenger of the gods) to investigate the circumstances surrounding Persephone's abduction. After interviewing Hades and Persephone, Hermes informs Zeus that the young lady (Zeus' niece) finds the powerful Hades attractive, but she is not yet ready to live apart from her mother. Hermes also notes that she had eaten six pomegranate seeds. Based on this, Zeus forges a compromise solution for the siblings, Demeter and Hades. Half the year Persephone would live in the underworld as Hades (her uncle) wife, but the other half of the year she would live with Demeter and the rest of the pantheon on Mt. Olympus. As goddess of the Harvest, Demeter refuses to let trees bud or flowers bloom in the spring until Hades releases Persephone.

At least a dozen other cultures generated myths that involved the sacred nature of the pomegranate. For, example, the image of a pomegranate adorns the Karnak temple in Luxor, Egypt. Assuming Moses' authorship of the Pentateuch in the fifteenth century B.C. it is possible that his writings influenced the other Mediterranean cultures. Likewise, pomegranate veneration may have predated Moses.

The next time that you see a pomegranate in your grocery aisle, don't be so fast to pass on it. The pomegranate is the ultimate antioxidant, and it can also teach us much about God's promises and provision. A copy of my peer-reviewed article can be downloaded at my Academia.edu page.