The days have blended together this week. We added an extra dig day Sunday due to our rained out day last week. Everyone was a bit unsure what day it actually was, but this we did know: It was now the weekend! The temperature this week got progressively hotter, Friday being the hottest. We had some visitors this week—the editor of Judea and Samaria Research Studies and a professor from Ariel University who is conducting a dig on the next hill over called "914" (because it's 914 meters above sea level). We thoroughly enjoyed our Pizza for Thursday lunch, and even got to meet the Palestinian guy who lived in Las Vegas and who makes the pizza for us.

Square Theme: If These Walls Could Talk

After finishing his square last week, Dr. Wood moved to the north in an attempt to trace the Late Bronze wall on the east side of the site. Instead, he found a first-century house. He completed that square and moved back down to continue to trace the line of megalithic stones that his assistant square supervisor, Hannah Terry, had uncovered last week. 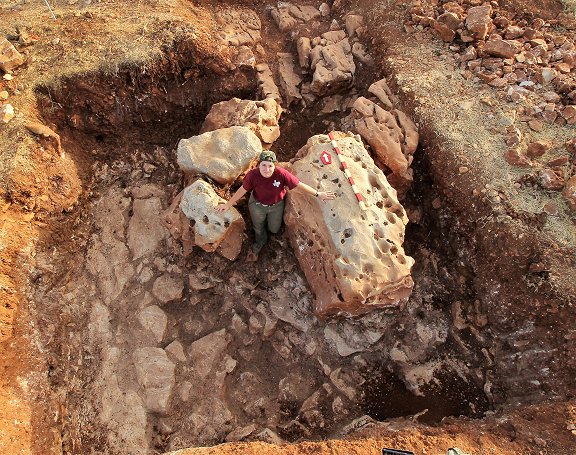 Dr. Hassler finished out his square, attaining bedrock. He found two more chambers to our first-century tower, so now we have a total of five. He found in situ flooring and pulled an impressive feat—100 objects and 69 coins in just two weeks! Judging from the pottery coming out of it, we're pretty comfortable saying that this tower was used in the Early Roman Period (first century AD) only. This week was the last week for Dr. Hassler and his crew. It's a shame, because there are other squares that would have loved to have his workers!

Ms. Leavitt started a new square this week. It began as a pile of rocks and has turned into a world of possibility. She was tracing known walls into her square and should have found corners, but they seemed to have disappeared. She had a section between two walls that was theorized as a street until a silo was found in the middle of it (dubbed the Manhole Silo). The silo appears to be from the first century, complete with a triangular oil lamp niche. However, the pottery coming out of it is from an earlier date. We are scratching our heads trying to figure out how this is possible. Near the silo is a rectangular cut in the bedrock that is reminiscent of the stairwell leading into the silo found by Suzanne Lattimer in 2014. Ms. Leavitt's team will be exploring this possibility next week.

Square Theme: Finish and Move On

Dr. Seevers and his crew completed their Iron Age house, did some dusting, and got pictures. They dug a trench later in an attempt to continue to trace the Bronze Age wall, but had no luck. They moved on to a silo that was uncovered last year when we had a backhoe on site to move dumps and rock piles. They've been finding first-century pottery. In typical archaeological fashion, they found a large "bag jar" in situ an hour before quitting time on Friday, and were in a rush to excavate it before we had to leave for the weekend. With the large Iron Age pithos from last week and this week's first-century "bag jar," they have quite a puzzle piling up in the War Room (office). 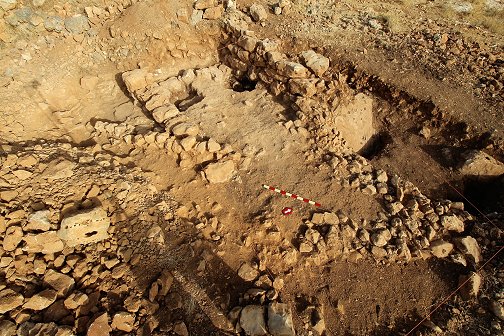 Square R12 final picture, with an Iron I Israelite house and its packed earth floor. A large pithos jar was discovered here, along with many other indications of domestic activity. Credit: Michael Luddeni. 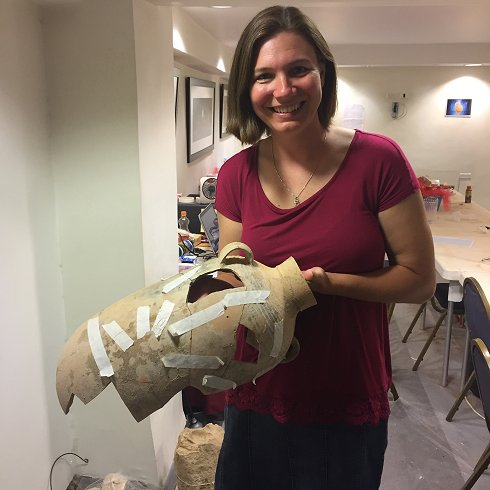 A "bag pot" being reconstructed, found in a silo. Credit: Michael Luddeni.

Mr. Rudd finished up the last of the monastery floor. He's done an excellent job of removing the flooring, checking the contents underneath, and placing the flooring back. Not all archaeology is destructive! These are important loci for us since they are sealed (undisturbed). His loci gave us evidence that supports our church being a single-apse structure destroyed and rebuilt as a triapsidal church. Later in the week, Mr. Rudd helped direct the removal of our first-century map from the bedrock. Many power tools were used, with the result that we have a one-square-foot chunk of rock with the map of the first-century city!

Dr. Peterson has been working on his squares for three years now. Beneath his wall was found an Iron Age silo, thus creating a hole within a hole. Then on Friday he found another hole, of questionable origin, on the other side of the wall! He thought he had found bedrock, but it was only in a portion of the square, so he and his crew continue to go down! This week they have been pulling out lots of sling stones, and one of Dr. Peterson's students pulled out a complete Middle Bronze Age juglet—an exciting find for the group from Lee University.

Suzanne's group finally got into the cistern that was spotted last week. They discovered that the piping was leading toward it, and there was a shallow basin also leading to it. They haven't finished the basin due to a "fake" wall being over it. Not all walls are clear. They have several walls that have just stopped, only one course high, were of questionable quality, or were like our "fake" wall built on a foot of soil above bedrock. The ancients were like the wise man who built his house upon the rock. The cistern is full of large-cut limestone stones, which has made excavating it slow. It takes about four guys to lift one out, or one assistant square supervisor to take out his frustration on it with a sledge hammer. We've also found a bunch of bronze cosmetic applicators, and this has lead to creative stories about the life and times of "Mrs. H" who lived there.

Note from the Director of Excavations, Dr. Scott Stripling

The ABR excavation team is once again one of the largest in Israel. Team spirit is high, and the work ethic, even under trying circumstances, is amazing. In addition to the things mentioned above, we also excavated a pristine silver Tyrian shekel and a handle with a stamped seal impression, perhaps of the famous "LMLK" (belonging to the king) type. I am grateful for your prayers and financial support which make all of this possible. Stay tuned for more... 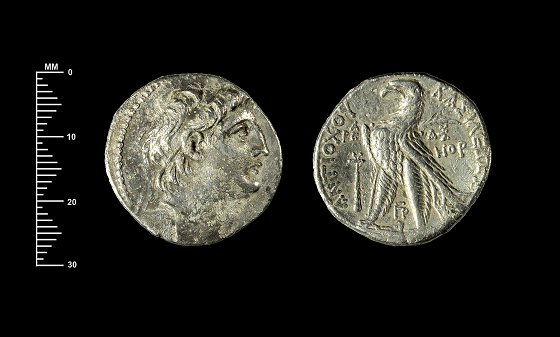