Digging at Khirbet el-Maqatir 2015: Week One

2015 marks the 20th anniversary of the beginning of the Khirbet el-Maqatir dig and also the 13th season of excavations at the site. We had some extra work to do at the beginning of the week in order to clean up the destruction caused by vandals following our 2014 spring season. The beautifully preserved walls of a first-century town, which we worked hard to uncover from 2011 to 2014, sadly were demolished. After a few days of hard work, we are now excavating in all areas.

There are four principle phases of occupation at the site: a 15th-century BC fortress, which we believe to be the Ai of Joshua 7-8; a small Iron Age settlement dating to ca. 1200-900 BC; the Late Hellenistic-Early Roman town, possibly Ephraim of John 11:54; and a Byzantine monastery. This season we are focusing on remains from the first three of these phases.

In Square P22, supervised by Brian Peterson of Lee University, TN, a large socket stone was found in secondary usage. Since the size of the stone is totally out of keeping with the context in which it was found, we believe it is the fourth socket stone from the fortress gate, removed and reused at a later time. Nearby were several megalithic paving stones, no doubt also associated with the fortress. I am working on the south side of the site in Square C17 where a large stela (carved stone monument) was found in 2009. Part of the stela had broken off, so I wanted to further investigate the area to see if we could find the missing piece. 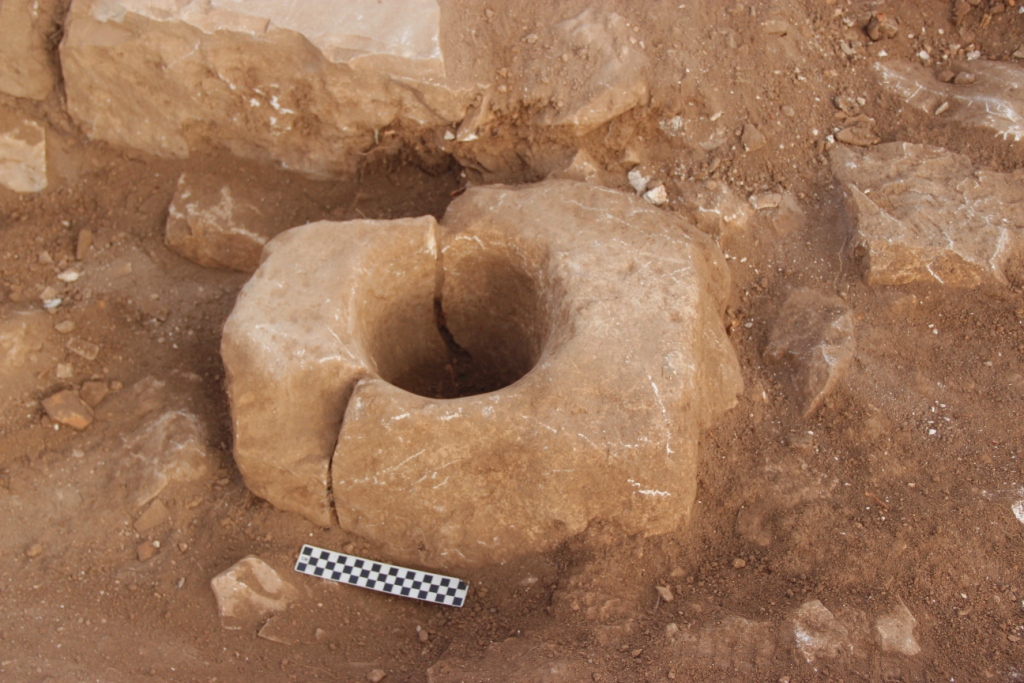 The neat thing about archaeology is that many times you don't find what you are looking for but find something even more interesting and important. That's the case with C17. The first thing I noticed was an enormous stone over 5 feet long in the southeast corner of the square. It lines up with several more large stones in the next square to the south and appears to be a section of the southern fortification wall. More excavation is required to confirm this hypothesis. After three days of clearing away the surface debris that had accumulated in the square since 2009, we began finding many flint points. So far we have found 39, plus many chips and other pieces that suggest flint manufacturing. Could this be the fortress workshop where spear points and arrow heads were made for the Amorite troops manning the fortress? I can't wait to get down to the occupation level to see what's there! 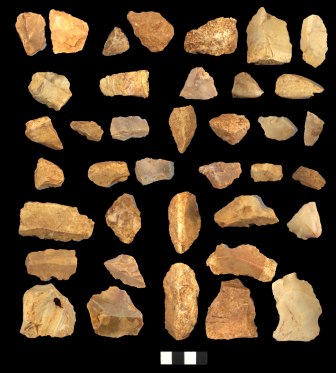 Flint points from Square C17, possibly a flint-making workshop for the 15th-century BC fortress.

Over the past several seasons we have been excavating dwellings from the early Iron Age built into the northwest segment of the earlier fortification wall. This week, excavation of two typical early Iron Age stone-lined storage pits found in 2014 was completed under the direction of Boyd Seevers of the University of Northwestern—St. Paul. A firepit and many broken storage jars were found nearby. Boyd and his team opened a new square, R10, at the end of the week. 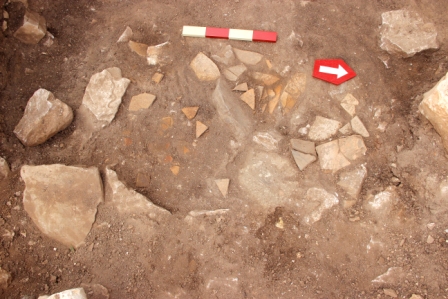 A layer of early Iron Age pottery in Square Q10. 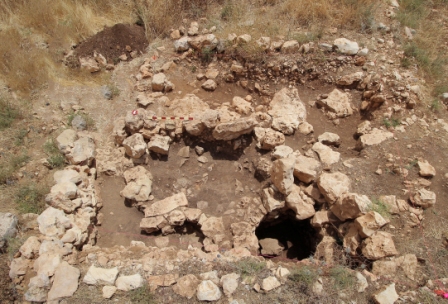 Significant finds continue to be made in this well-preserved town. Perhaps the most important are two jar stands, both inscribed. Although fragments of such stands have been found in the past, these are the first complete examples. The first to be found came from Square O23 supervised by Steve Rudd. It is inscribed with "he gimel he" (HGH).

The second came from Cavern 4, supervised by Abigail Leavitt, and it is inscribed with a "resh" (R). A previous fragment from 2010 had one letter on it; therefore the he gimel he on the O23 stand represents the first genuine inscription found at Khirbet el-Maqatir. We are not entirely sure of the significance of the letters, but our late-period expert Peretz Reuven suggests that they may have to do with religious rites involving the contents of the jars on the stands. 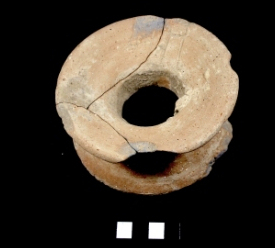 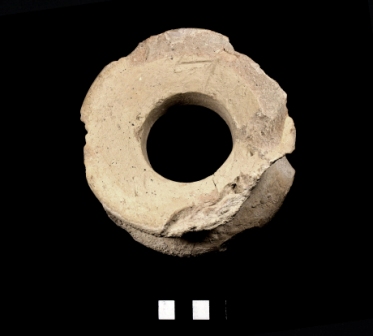 Jar stands (above two pictures) from the first-century town, with the inscriptions "he gimel he" and "resh" on them.

This week we added 17 to the number of fragments of various stoneware vessels found in the town. They were considered to be pure vessels by the inhabitants. In addition, a small column was found, and our metal detectorist Ellen Jackson of Wycliffe Bible Translators recovered 44 coins from across the site.

Fragments of stoneware vessels, considered ritually pure by the community. 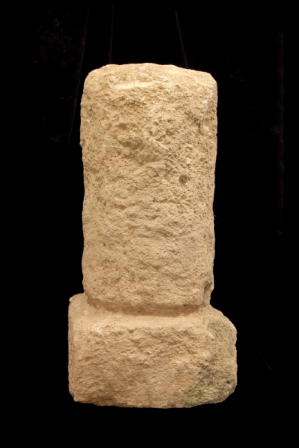 A small pillar from the Late Hellenistic-Early Roman town.

A Message from Dr. Scott Stripling, Director of Excavations

On our day off, several of the square supervisors helped me reorganize our storage bin at the Israel Antiquities Authority. While visiting with the staff archaeologist there, he reminded me that we are now the biggest excavation in Israel! I give God all of the glory for this. Financially, we run a very tight ship, and at present we are only $5,000 short of our fundraising goal for this season. I am praying that you will see the great progress that our dig is making and contribute toward our operational costs. I will give you an update in next week's newsletter. Shalom!