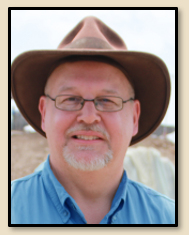 Henry B. Smith Jr. is the Administrative Director of the Shiloh Excavations. He served as the Director of Development for ABR from 2005 through 2015. He presently serves as a staff researcher, as administrator for the Shiloh Dig, and as the co-host of ABR's television program, Digging for Truth. Henry served as a volunteer at the Hazor excavations in 2007, and was the host of both the ABR Biblical Egypt Study Tour in 2008 and ABR's Israel Tour in 2010. He was a square supervisor at the Khirbet el-Maqatir Excavations in 2012 and 2013, and at Shiloh in 2017 and 2018. Born and raised in northwestern NJ, he earned a B.A. in Economics from Rutgers in 1992. In 2015, Henry graduated from Westminster Theological Seminary with an M.A.R., emphasizing apologetics and Biblical languages. He has published dozens of articles on the ABR website, including: Canaanite Child Sacrifice, Abortion and the Bible and Cosmic Death from Adam's Fall: An Exegesis of Romans 8:19-23a. He is presently heading up the The Genesis 5 and 11 Genealogy and Chronology Research Project for ABR, authoring: Primeval Chronology Restored, The Case for the Septuagint's Chronology in Genesis 5 and 11, and On the Authenticity of Kainan, Son of Arpachshad.