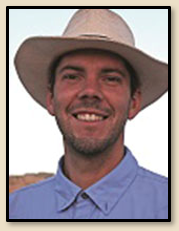 Mr. Tim Lopez is a Square Supervisor at Shiloh. Born in Sweden to a Swedish mother and Spanish father, Tim lived in both countries during several periods of his life. With a passion for archaeology from boyhood, Tim attended Uppsala University in Sweden, where he received his B.A. in Ancient History, with minors in ancient and modern Hebrew. In 2009, he completed his M.A. in Classical Archaeology at the Rovira i Virgili University in Tarragona, Spain. His archaeological experience includes excavations in Sweden with the Dalarnas Museum, the Greek/Roman city of Empùries (Spain), and the ancient city of Oxyrrhynchus in Egypt. During an eight year hiatus from archaeology, Tim worked in a translation agency in Barcelona (Spain) for 5 years, and served as youth pastor in Falun (Sweden) for 2 years. Tim joined the ABR team for the inaugural excavation at Shiloh in 2017, serving as an Assistant Square Supervisor.