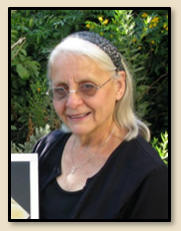 Frankie Snyder has volunteered with ABR at Khirbet el-Maqatir and Shiloh since meeting the group at the Temple Mount Sifting Project (now, the Archaeological Experience at Emek Tzurim) in 2008. Her 12 years of archaeological wet-sifting experience have given her wide-ranging expertise in the identification of small finds. Frankie moved to Israel in 2007 with plans to retire. Retirement never happened. Her volunteering at the Sifting Project turned into a paying job, then a full-time career. With a BS in mathematics from Virginia Tech, an MA in Jewish Studies from Hebrew College in Boston, and a lifelong love of rocks, she launched a “niche” career in analyzing King Herod’s ornate opus sectile floors created from polished multicolored stone tiles cut in a variety of geometric shapes. She assisted in reconstructing an opus sectile floor for the 2013-2014 exhibit at the Israel Museum, Herod the Great: The King’s Final Journey. She has worked with Herodian-era opus sectile tiles from Banias, Caesarea, Cypros, Herodium, Jericho, Machaerus, Masada, Tiberias, the City of David and Temple Mount; Byzantine-era tiles from several sites in Israel; Crusader-era tiles from the Church of the Nativity in Bethlehem; and discovered that an opus sectile floor in the Dome of the Rock is actually a Crusader-era floor. Her publications can be found on Academia.edu.