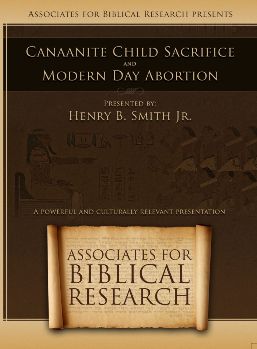 Just as ancient Greek and Roman propagandists insisted, the Carthaginians did kill their own infant children, burying them with sacrificed animals and ritual inscriptions in special cemeteries to give thanks for favors from the gods, according to a new study.

[W]hen you pull together all the evidence - archaeological, epigraphic and literary - it is overwhelming and, we believe, conclusive: they did kill their children, and on the evidence of the inscriptions, not just as an offering for future favours but fulfilling a promise that had already been made,' argues Josephine Quinn, ancient history lecturer at Oxford University. Quinn and her colleagues published the results of their study in their article, 'Phoenician Bones of Contention' in Antiquity, volume 87. (off-site link).

For more on this story, see (off-site links):

Archaeology and the Arts

Watch this preview of the ABR DVD: Canaanite Child Sacrifice and Modern Day Abortion, available in the ABR bookstore.